Alexis Charles Henri Clerel was the third and youngest son of Hervé Louis François Bonaventure Clerel, comte de Tocqueville, and Louise Magdelaine Le Peletier de Rosanbo. He was born on 10 Thermidor of the thirteenth year of the Republic (29 July 1805) at number 987, rue de la Ville-l'Évêque in Paris. Aristocratic titles were still not recognized and the child was registered as Alexis Charles Henry Clerel, his father given only the family name of Clerel and his mother that of Lepeletier Rosanbo.[1][2] His father had been an officer of the Constitutional Guard of King Louis XVI and would later be a prefect and Peer of France. Alexis's parents had been arrested during the reign of Terror and it is believed they only escaped execution thanks to Robespierre's downfall. Many members of Tocqueville's maternal family were victims of the Terror: his grandfather, Louis Le Peletier de Rosanbo, was guillotined on 20 April 1794, followed two days later by his wife, Marguerite de Malesherbes, her father, Chrétien-Guillaume de Lamoignon de Malesherbes, his sister, Aline-Thérèse Le Peletier de Rosanbo, and her husband, Jean-Baptiste-Auguste de Châteaubriand. Malesherbes's elderly sister Nicole, Countess of Sénozan, was executed two weeks later. Tocqueville's mother never completely recovered from her captivity and the execution of so many family members and remained traumatized and bitter.

Tocqueville was therefore the great-grandson of Malesherbes, a statesman and minister in the ancien régime, and later counsel for the defense of Louis XVI, who was known for his vigorous criticism of royal abuses as President of the Cour des Aides and his role in helping with the publication of the Diderot and d'Alembert's Encyclopédie. He was also the nephew by alliance of celebrated author François-René de Châteaubriand, and, through his grandfather Louis de Rosanbo, a descendant of Vauban. His elder brother Hippolyte had a political career as a delegate (député), senator, and mayor of Nacqueville. Through his other brother Édouard he is the uncle of Colonel René Clérel de Tocqueville, councillor in the Manche department, mayor of Tourlaville and delegate.[3]

Alexis de Tocqueville spent his childhood at the château of Verneuil-sur-Seine which his mother had inherited from her great-aunt Nicole de Sénozan. He attended the Collège Royal (now Lycée Fabert) of Metz[4][5] while his father was Prefect of Moselle (1817-1823). He went on to study the law in Paris.[6][7] He started his career in the law as juge-auditeur at the Civil Court of Versailles,[8] where he would meet his lifelong friend and co-author Gustave de Beaumont.

In 1831, Alexis de Tocqueville and Gustave de Beaumont were sent to the United States to study the American prison system. They spent nearly 10 months there, not only visiting prisons but also meeting many people, including such personnalities as the Attorney General of Louisiana, Etienne Mazureau. They collected a wealth of information about law, sociology, demographics and linguistics. The result was a report titled Du système pénitentiaire aux États-Unis et de son application (1833). More importantly, this was the inspiration for Tocqueville's major work, Democracy in America, published in two volumes, the first in 1835 and the second in 1840. The book was immensely successful; Tocqueville was elected to the Académie des Sciences Morales et Politiques in 1838, and to the Académie Française in 1841.[9]

In addition, Tocqueville spent time in England and Ireland, publishing Voyages en Angleterre et en Irlande in 1835. In 1836 he travelled to Switzerland with his wife and observed the Federal Assembly at Bern. In 1841 and 1846 he travelled to Algeria an published Travail sur l'Algérie (1841) and Rapport sur l'Algérie (1847) in which works he supports colonialism and advocates racial segregation in Algeria.[10]

Tocqueville's other major work, The Old Regime and the Revolution was started in 1854 and left unfinished. Only the first part was completed and published in 1856.

Alexis de Tocqueville met his future wife, Mary Mottley, about 1828. Mary, English, Protestant, without aristocratic connections and six years his senior, looked like an unexpected partner for Alexis and it is said that his family and friends disagreed with their union. Mary and Alexis married in Paris on 26 October 1835.[11] The marriage act disappeared in the fire that destroyed most of the Paris archives in 1870 and the reconstitution does not give any details; but the marriage contract is preserved at the Archives de la Manche. Alexis's parents were both present at the signature and therefore eventually consented to the marriage.[12]

Mary and Alexis had no children. According to his biographer Jean-Louis Benoît, Tocqueville fathered an illegitimate child in 1822, when he was a student in Metz. The mother was a local seamstress, Marguerite Meyer.[13] The child has been identified as Louise Charlotte Catherine Meyer, born on 9 August 1822 in Metz. However another man, Jean Mathias Davion, formally recognized the child as his own daughter in February 1823.[14].

After the downfall of the July Monarchy (1848), as a member of the Constituent Assembly, he participated in drafting the new Constitution of the Second Republic. Though hostile to the new President, Louis-Napoléon Bonaparte, Tocqueville accepted to become Minister of Foreign Affairs in his government, in July 1849. He was among the 220 delegates who attempted to resist Louis-Napoléon Bonaparte's coup in December 1851 and were arrested at the city hall of the 10th arrondissement of Paris. After being detained in the castle of Vincennes, he was released and quit political life and retired to his castle in Tocqueville, in Normandy.

Tocqueville spent his last years writing The Old Regime and the Revolution. The first part was published in 1856. But his health deteriorated and he could not complete the second part. Suffering from tuberculosis, he retired to Cannes (then in Var but part of Alpes-Maritimes since 1860) and died there six months later, on 16 April 1859. He was 53 years old.[17][18]

Tocqueville is famous for his analyses of American democracy and the French Revolution. His work was under-estimated in France for several decades (he was however still read, especially in the United States) and has been rediscovered after the second World War. He is still often cited in the United States, not without controversy.[19]

Alexis de Tocqueville spent his childhood at the château of Verneuil-sur-Seine which his mother had inherited from her great-aunt Nicole de Sénozan. He attended the Collège Royal (now Lycée Fabert) of Metz[4][5] while his father was Prefect of Moselle (1817-1823). He went on to study the law in Paris.[6][7] He started his career in the law as juge-auditeur at the Civil Court of Versailles,[8] where he would meet his lifelong friend and co-author Gustave de Beaumont.

Is Alexis your ancestor? Please don't go away!

ask our community of genealogists a question.
Sponsored Search by Ancestry.com
DNA
No known carriers of Alexis's ancestors' DNA have taken a DNA test. 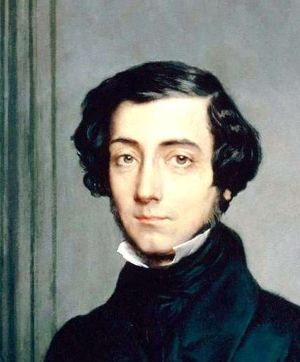 We plan on featuring Alexis as the Example Profile of the Week in the Connection finder on July 29th. Between now and then is a good time to take a look at the sources and biography to see if there are updates and improvements that need made, especially those that will bring it up to WikiTree Style Guide standards. I will check on the profile closer to the week we'll feature it and make changes as necessary.

Alexis is 23 degrees from Laurie Giffin, 38 degrees from Toni Morrison and 19 degrees from Henry VIII of England on our single family tree. Login to find your connection.