"William Claflin (1818-1905) was bom in Milford, MA, the son of Sarah Adams Claflin and Lee Claflin. William's father, Lee, was bom into a family of successful Boston merchants who lost their money after the American Revolution. The death of Lee Claflin's father forced Lee to support his family at an early age. He served as an apprentice tanner and set himself up in a business in which he became one of the leaders of the industry.

William Claflin interrupted his education at Brown University to provide assistance to his family's shoe manufacturing company. During the late 1830s, he opened his own boot and shoe manufacturing firm in St. Louis, Missouri, where he married Nancy Harding in 1840. The marriage was short-lived due to Nancy's death in 1842, and Claflin's return to Boston by c.1843 was undoubtedly linked to his grief over his wife's premature passing. Back in Boston, Claflin became a partner in his father's business and by the late 1840s had become active in state politics. He was a founder of the Free Soil Party, serving in the Massachusetts House of Representatives from 1849-1853. In 1859, Mr. Claflin was elected to the Massachusetts Senate, where he became Senate President in 1861. After serving as Lieutenant Governor for Alexander Hamilton Bullock, Claflin mounted a successful campaign for the Governor's office in 1868. As Governor, Claflin promoted women's suffrage and extending them greater rights under the law. Claflin's enlightened view on women's rights was undoubtedly nurtured by his second wife, the noted author Mary Bucklin Davenport Claflin (1825-1896).

Bom in Hopkinton, Massachusetts, Mary B.D. Claflin was an accomplished author as well as a prominent Boston hostess who socialized with the leading intellectuals of Boston and New England in her Mount Vemon Street and Newtonville residences. She wrote "Brompton Sketches," "Personal Recollections of John G. Whittier," "Real Happenings," and "Under the Old Elms."

Returning to the the story of William Claflin, it should be noted that he served as the Commonwealth's governor from 1868 to 1873. In 1869 he signed the petition presented by his father Lee Claflin, Jacob Sleeper, and Isaac Rich to create Boston University, which was then affiliated with the Methodist faith. Around 1870, the Claflins purchased land for Claflin University, the historically black Methodist University in South Carolina. According to Sally Ann Kydd, "Boston University experienced amazing growth in the 1870s. By 1874, it consisted of seven schools and colleges in buildings that were either leased or purchased on Beacon Hill, in downtown Boston, and in the South End." Claflin was also a founding trustee of Wellesley College. In 1876, he became president of the Massachusetts Club, the first Republican club founded in Boston. Claflin served as president of this institution until 1902. During the 1870s, number 63 Mount Vemon Street became the most important social venue in the city, where figures from the realms of politics, higher education, religion, literature, and commerce intersected in the parlors of the Claflins' Mount Vemon Street town house. Guests included Brooklyn Congregational clergyman Henry Ward Beecher, Harriet Beecher Stowe, Rev. James Freeman Clarke, Charles Sumner, Oliver Wendell Holmes, Chief Justice Chase, John G. Whittier, President Rutherford B. Hayes and his wife Lucy W . Hayes, and many others.

In addition to his involvement with politics, education, Methodism, women's rights, and the advancement of African Americans, William Claflin remained an active partner in his family's shoe and leather business. Called William Claflin & Company in 1870, his firm was known as Claflin Cobum & Company by 1890. Variously listed on Pearl and Summer Streets during the 1870s and 1880s, it was located at 73 High Street by 1890. The Claflin Building, still extant at 20 Beacon Street, was built in 1884, not as a commercial building for the family's shoe and leather dealership, but as Boston University's School of Education.

After Claflin's death in 1905, number 63 Mount Vemon Street was owned by Henry N. Sweet, trustee of the Claflin estate. The trust retained control of this property until at least the early 1920s. By 1930, this building contained the offices of Dorothy McKissick, notary, and lawyers James Sullivan and Guy W. Currier. By 1940, Mrs. Marie G. Currier, widow, is listed at this address."

ask our community of genealogists a question.
Sponsored Search by Ancestry.com
DNA Connections
It may be possible to confirm family relationships with William by comparing test results with other carriers of his Y-chromosome or his mother's mitochondrial DNA. However, there are no known yDNA test-takers in his direct paternal line. Mitochondrial DNA test-takers in the direct maternal line: 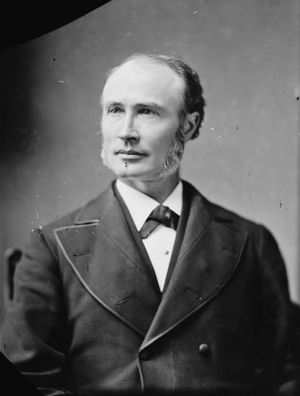