Gilbert de Clare, 4th Earl of Hertford (c1180-25 October 1230),[5][6] was the son of Richard de Clare, 3rd Earl of Hertford,[7] from whom he inherited the Clare estates. He also inherited from his mother, Amice FitzWilliam, the estates of Gloucester and the honour of St. Hilary, and from Rohese, an ancestor, the moiety of the Giffard estates. In June 1202, he was entrusted with the lands of Harfleur and Montrevillers.[8][9]

In 1215 Gilbert and his father were two of the barons who signed Magna Carta sureties. In May 1217, he fought on the side of Louis of France at the Battle of Lincoln and was taken prisoner by William Marshal,[8] whose daughter Isabel he married on October 9, 1217.[7][6][8]

In 1223 he accompanied his brother-in-law, the Earl Marshal, in an expedition into Wales. In 1225 he was present at the confirmation of the Magna Carta by King Henry III. In 1228 he led an army against the Welsh, capturing Morgan Gam, who was released the next year.[8]

In 1230 he accompanied Henry on his expedition to Brittany, but died on the way back at Penros, in the duchy.[10] He was buried 11 November 1230, Tewksbury, Gloucester, England[7] before the high altar of the abbey.[11]

"In 1230, Gilbert earl of Hertford and Clare, . . . died at Penros in Brittany, bequeathing his body to be interred in the [Tewkesbury] monastery.y"[12]

From records of the Abbey Church of Tewkesbury:[13]

"... Gilbert de Clare, the first who bore the double title.... He died in Brittany, but was buried here by his own wish. Very little of his coffin remains.

"The de Clares were one of the great baronial families of twelfth- and thirteenth-century England, holding wide estates in eastern and western England and beyond. For a while the senior branch, based at Tonbridge (Kent), was eclipsed in fame and fortune by a brilliant junior branch which established itself in South Wales and the Marches. Richard FitzGilbert de Clare of this branch, known to history as ‘Strongbow’, was the leader of the semi-official Anglo-Norman invasion of Ireland in Henry II’s reign and obtained a grant of the lordship of Leinster from the king in 1171. This cadet branch became extinct in the male line on the death of Strongbow’s son Gilbert in 1185 and the family’s estates were later taken over by the Marshal earls of Pembroke.

"Richard de Clare, appointed to the Twenty Five, of the senior branch of the family, was the son of Roger de Clare (d. 1173), lord of Tonbridge, who was in turn the younger brother and successor of Gilbert II (d. 1152), to whom King Stephen had granted the title earl of Hertford in or around 1138. In the twelfth and early thirteenth centuries the earls used the title ‘of Hertford’ interchangeably with that of earl of Clare.

"For over four decades until his death in 1217 Earl Richard was the effective head of the house of Clare. He does not appear to have been especially active, however, playing little part in national affairs either in the last years of Henry II’s reign or in that of Richard the Lionheart. He only emerged as a figure of political importance towards the end of his life in the crisis of John’s reign, when he was appointed to the Twenty Five, most probably in recognition less of his personal qualities than his family’s exalted standing in the realm.

"Earl Richard’s greatest and most lasting achievement was to add to the already considerable wealth and landed endowment of his line. In 1189 at the beginning of Richard’s reign, in a major acquisition, he received a grant of half of the honor (or feudal lordship) of the Giffard earls of Buckingham, which had escheated to the crown over twenty years before following the death of the last earl, Walter. The Lionheart effected an equal division between Earl Richard and his cousin Isabel, daughter of Strongbow and wife of William Marshal, earl of Pembroke, both of whom claimed descent from Roesia, Walter’s aunt and wife of Richard FitzGilbert de Clare, first founder of the family.

"In 1195 Earl Richard made another substantial, though less perhaps important, addition to his family’s inheritance when he obtained the feudal honor of St Hilary on the death of his mother Maud, Earl Roger’s widow. The honor, for which Richard offered £360 to the Crown, included lands in Norfolk and Northamptonshire.

"The most substantial of all the additions Earl Richard made to the family estate, however, came as a result of his marriage to Amicia, second daughter and eventual sole heiress of William, earl of Gloucester. The Gloucester inheritance was a vast one, comprising over 260 knights’ fees in England and extensive lands in Wales and the Marches. The story of its partition among the three daughters and co-heiresses is long and complex. Mabel, the eldest of the three, was married to Amaury de Montfort, count of Evreux in Normandy, while Isabel, the third and youngest, was married to the future King John. Mabel’s marriage was childless and on her husband’s death her lands passed to Isabel. John, however, on becoming king, divorced Isabel so that he could marry the Poitevin heiress Isabella of Angouleme, giving his now ex-wife in marriage to Geoffrey de Mandeville, another of the Twenty Five, and charging him 20,000 marks for the privilege. After Geoffrey died in 1216 her hand was taken by a third husband, Hubert de Burgh, but she herself died in 1217, and her estates passed to Amicia and her husband, Earl Richard. Earl Richard survived Isabel by only six weeks and did not live to secure formal seisin of her estates and title. It was left to his son and heir Gilbert, another of the Twenty Five, to succeed to the vast Gloucester inheritance. Shortly after his father’s death Gilbert assumed the combined titles of earl of Gloucester and Hertford. Countess Amicia lived out her last years in retirement, probably at Clare, having been separated from her husband, for reasons unknown, since 1200.

"Earl Gilbert was an active participant on the baronial side in the civil war that followed in the wake of King John’s rejection of Magna Carta. He fought with Louis and the French at the battle of Lincoln in May 1217 and was taken captive by none other than William Marshal, the Regent, whose daughter, Isabel, he was later to marry. In 1225 he was a witness to Henry III’s definitive reissue of Magna Carta. In 1230 he accompanied Henry on his expedition to Brittany, but died on the way back at Penros, in the duchy. The earl’s body was brought by way of Plymouth to Tewkesbury, where he was buried before the high altar of the great abbey. A monument, now lost, was erected to his memory by his widow.

"By a strange irony, the de Clare family, like their predecessors in the Gloucester title, was to come to an end in 1314, after the death of the last earl, in the succession of three daughters and coheiresses and the partition of the family estates between them."

Sponsored Search by Ancestry.com
DNA
No known carriers of Gilbert's DNA have taken a DNA test. 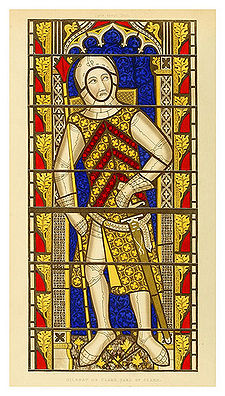 Liz (Noland) Shifflett
Hi! The Magna Carta project is working toward having a project member as "Surety Specialist" for each surety baron, to aid collaboration and to help watch over the profile. (See details about the role of Surety Specialists here, the "long answer" on the project's Glossary page.)

Liz (Noland) Shifflett
I added "Earl of Gloucester and Hertford" in the "Other Nicknames" field, replacing "7th Earl of Clare, 4th Earl of Hertford, Lord of Harfleur and Mostrevillers in Normandy"

The Magna Carta project follows EuroAristo & Cymru naming guidelines, as applicable. Cymru recommends not using numbers in the nickname field, which I followed in this case.

I was doing a re-review... Anyone know the source for death location of "Perres Guirrec Penrose, Bretagne, France"?

Wikipedia has a Perros-Guirec in Brittany: https://en.wikipedia.org/wiki/Perros-Guirec - no mention of Penros/Penrose.

April (Dellinger) Dauenhauer
The Comment by Chase Ashley regarding the use of "Sir" motivated me to look up Gilbert de Clare's biography in Richardson's Royal Ancestry, Vol II, page 185. Gilbert de Clare is written by Douglas Richardson:

While it is difficult to say anything is 'conclusive' regarding these Medieval ancestors, Richardson is known to be a stickler for detail, and I would not expect him to write de Clare's title with "SIR" without evidence of some sort.

Doubtless there is more to it than covered here, and this era produces conflicting opinions among experts, regardless.

SJ Baty
It is my understanding (from watching "The Crown" all last month and then reading about them at Wikipedia) is that you only call a knight "Sir." For those who have aristocratic ranks higher than Knight, it is redundant to call them "Sir" and "Earl." Have a look at this page:

The Knights and Baronets are styled as "Sir" whereas Dukes and Earls and the like are not.

PROPER USE OF DATA FIELDS FOR MEDIEVAL AND EARLIER PROFILES:

Darlene (Athey) Athey-Hill
I wrote Prof. Saul two years ago and got permission to use their data, so long as we link to the Magna Carta 800 Committee website (his organization) and not the Magna Carta Barons, which is a different organization.
posted Apr 10, 2016 by Darlene (Athey) Athey-Hill
[Living Schmeeckle]
All of the MC writeups from Nigel Saul were added by Darlene Athey. I brought up this issue long ago, but I was focused elsewhere on the project, not on the biographies. If I remember correctly, she got retroactive permission to post them as long as the MC 800 Committee was linked.
posted Apr 08, 2016 by [Living Schmeeckle]