Almost 2 years after his first marriage, on April 20, 1854, Henry married Amanda M. Clark b. July 12, 1836 in Arkansas. Their license was issued on April 17, 1854 – 3 days before their marriage – and the marriage license is documented in the Gonzales County Courthouse Annex. Henry would have been 25 and Amanda would have been 17 at the time of their marriage. Amanda was the sister of Susan “Susie” Clark, who married Henry’s brother Harrison. So in this case, the Clark sisters married the O’Neill brothers. Both Amanda and Susan are listed as heirs in their father, Nicholas Clark’s will, filed in Gonzales Co., TX.

The other children can be documented through cemetery records of the O’Neiil Cemetery, which is located 1 mile north of Leesville Highway 80 on the south side of O’Neill creek. Alice is the only child that can be referenced through both census records and her cemetery tombstone. The cemetery tombstones document birth and death dates for J.H., Carrie Bell, and Alice. All tombstones read “In memory of ..(name).son/daugher of Henry and Amanda O’Neill...” Also, all three of the children buried in the cemetery were around 1 ½ years old when they died. Alice, who was born in 1859, would have died in November 1961, just prior to Henry being mustered into military service.

The Civil War began on April 12, 1861. The Texas state legislature authorized volunteer military companies on February 15, 1858, but by the time the war started, the Texas Legislature passed an act requiring all “able-bodied men between the ages of 18 to 50, with certain exceptions, to enroll for defense and be subject to call of the Confederate Government”. One of the volunteer companies that organized in Gonzales County was the Sandies Home Guard. The Sandies Home Guard was organized June 22, 1861. Henry, at the age of 32, along with 5 of his brothers, William (28), George Washington Jr. (27), Harrison (25), John (22 or 23), and Miles (16), volunteered for the Sandies Home Guard. Their younger brother, Calvin, was only 11 at the time. The brothers are listed as privates under Captain Michael Erskine. The guard’s name probably came from Sandies Creek or Sandies Hill in Leesville, TX.

Then, in 1862, all the brothers, except Harrison and Calvin, enlisted into the Confederate Army and served until the end of the war. George W., John, Miles, and William all served in the 36th Cavalry Company D. However, other sources list them serving in the Texas Mounted Riflemen, which later came to be known as Company D of the 32nd Regiment Texas Volunteer Cavalry. Although Harrison volunteered for the Sandies, he did not volunteer for the Confederate Army. It may be that he stayed behind to take care of the O’Neill families left behind and his parents, George Washington, Sr. and Mary who were in their 50’s with one child, Calvin, still at home. Henry was not on the roll with his brothers and there is no clear reason why this is. His company ended up being Company A, 4th Regiment of the Texas Cavalry C.S.A., and then that group formed a part of the Brigade of General Thomas Green in 1863.

At this time Henry and Amanda would have been married about 8 years and had one child at home, George Nicholas, 7years old. Two children, J.H. and Alice, had passed away, and it is possible that Amanda was pregnant with James H, who was born in 1863.

The next census, in 1870, lists Henry on page 480b beginning on line 8. He is listed as Henry Oneill, 41, Farmer, born in Tennessee. His wife, Amanda, 30, keeping house, born in Arkansas, and the children: George N., 15, born in Texas, James H., 7, born in Texas, and Lelia, 2, born in Texas. Another child, Carrie B. was born October 13, 1865, and died December 27, 1866, and so did not show on this census. Also, Amanda must have been pregnant at the time of the census since Mary Emma, born in 1870, was not listed on the census. His brothers are listed on the same census and must have lived close to each other.

Henry and Amanda had one last child together, John Beasley, born January 17, 1873. Apparently the birth of this child resulted in her death, for on January 27, 1873, 10 days after John Beasley was born, Amanda died. Amanda was buried in the O’Neill Cemetery with her children, J.H, Alice, and Carrie, who preceded her in death. At the time of Amanda’s death, Henry would have been 44 years old with five children: George N. (17), James (10), Susan Lela (5), Mary Emma (2), and John Beasley (10 days old).

ask our community of genealogists a question.
Sponsored Search by Ancestry.com
DNA
No known carriers of Amanda's DNA have taken a DNA test. 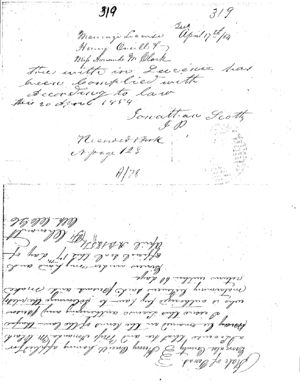 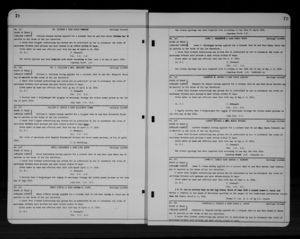 Will Probate for Nicholas Clark naming children as heirs 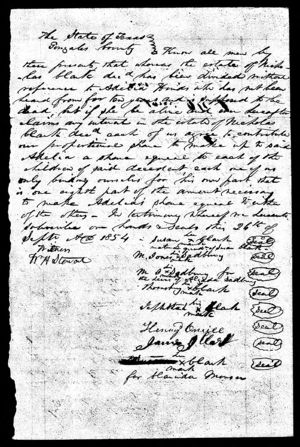