Faith Clarke came from Ipswich, England on the "Francis" in April 1634. She is listed (as "Faith Clearke") among those passengers not taking the Oath of Allegiance and Supremacy at the Custom House at Ipswich, due to being under age. Her age is indicated as 15 years in the record. She is listed in the group with John Pease which has made some question if she was Thurston's daughter. However, her relationship to Thurston is confirmed by this court document:

[1 Jun 1663 Plymouth Court:] "concerning the disposing of the estate of Faith Clarke, widow, deceased, that her daughter, Faith Dotey, widow, shall have a quarter part, or one part of four, of the goods and chattels of the said Faith Clarke, her debts being discharged; and the remainder three parts of four, or three-quarters thereof, shall be equally divided betwixt her [widow Faith Clarke's] two sons, Henery and Thurston Clarke [jr]"[1]

Therefore, she was not the daughter of a Richard Clarke and Faith Loes.

Less than a year after her arrival at Plymouth, she married Edward Doty on 6 January 1634/5 in Plymouth.[2] In his "History of Plymouth Plantation" completed in 1650, Governor William Bradford refers to her as Edward Doty's second wife. The colony records contain no indications that Edward was married earlier and no clues to the identity of his first wife.

She and her husband had nine children, the youngest born less than two years prior to his death in 1655.

Faith's will was proved 8 Jun 1676. When she married second to John Phillips there was a pre-nuptial agreement to ensure her right to care for her children and her property. In her will she stated Faith Phillips the wife of John Phillips, of Marshfield, though weak in body she bequeathed to "my daughter Mary 9 pounds in my son John's hands, to my daughter Elizabeth 6 pounds, to my daughter Mary 3 pounds due by bill of sale, to my daughter Desire 6 pounds, due by my bill of sale and a warming pan. On 4 Nov 1676 letters of administration were granted to her son-in-law, John Rouse, Jr. of Marshfield, husband of her daughter Elizabeth ... in behalf of himself his wife and sisters: viz Desire [torn] and Mary Doten.

Inscription on the Headstone of Faith Clarke Doty Phillips

"FAITH, DAUGHTER OF FAITH AND THURSTON CLARKE OF IPSWICK CO. SUFFOLK ENGLAND, CAME IN SHIP ‘FRANCIS’ AT AGE 15 WITH HER FATHER IN 1634; MARRIED EDWARD DOTY OF THE ‘MAYFLOWER’ ON 6 JAN 1634/35; MOTHER OF 9 CHILDREN, ALL BORN AT HIGH CLIFFE IN PLYMOUTH. AFTER EDWARD'S DEATH 23 AUG 1655 IN PLYMOUTH, SHE REMAINED IN HER HOME AT HIGH CLIFFE UNTIL 14 MAR 1666/67, WHEN SHE MARRIED SECOND AT PLYMOUTH JOHN PHILLIPS OF MARSHFIELD AS HIS THIRD WIFE. FAITH DIED 21 DEC 1675 IN THIS CEMETERY (WINSLOW BURYING GROUND). TO THE GLORY OF GOD AND IN MEMORY OF FAITH CLARKE DOTY PHILLIPS. THIS MONUMENT DEDICATED 6 MAY 1989 BY THE PILGRIM EDWARD DOTY SOCIETY."

Sponsored Search by Ancestry.com
DNA
No known carriers of Faith's DNA have taken a DNA test. 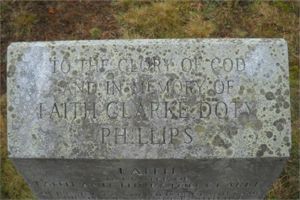 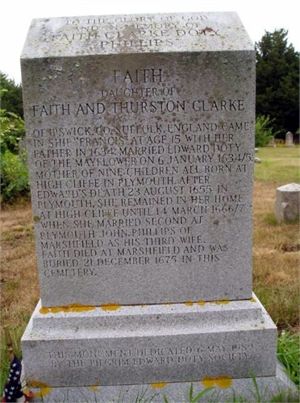 The name confusion is because Faith Clarke Doty Phillips married John Philips after the death of Edward Doty.

Ellen Smith
Clarke-16471 and Clarke-140 appear to represent the same person because: Same birth and death data (except for a one-year discrepancy attributable the the calendar difference), same spouse, same child. These are clearly the same person. Please merge.
posted Sep 06, 2020 by Ellen Smith

Bobbie (Madison) Hall
Do we have a source for her date of birth? I find it over on her Findagrave memorial, too, (but as 1619) with no source. Anderson does not provide a birth date either. Perhaps someone has a copy of the Silver Book for Edward Doty, and it's given there?
posted Apr 27, 2017 by Bobbie (Madison) Hall
Mona (Dickson) Jensen
She was buried Dec 21, but is there evidence that she died the same day?
posted Aug 01, 2016 by Mona (Dickson) Jensen

Robin Lee
I have sent a note to the profile manager of the profile to be merged with requests about the data that he has on the parents.
posted Sep 18, 2014 by Robin Lee

Robin Lee
I do not believe that Thurston Clarke was Faith's father. If you look at the register of the of the Francis, the ship that she came to the colonies on, while she is listed after Thurston Clarke, the note after her name says she is the Ward of J. Pease.
posted Aug 19, 2014 by Robin Lee

Jillaine Smith
Clarke-140 and Clarke-4263 are not ready to be merged because: While these definitely look like the same woman, we need to confirm who her parents were before we can merge them. Who can help?
posted Aug 19, 2014 by Jillaine Smith

Robin Lee
Clarke-140 and Clarke-4263 appear to represent the same person because: re-proposing, I believe this to be the same person with the same name that married the same man
posted Aug 18, 2014 by Robin Lee