Arthur C. Clarke was a British science fiction and nonfiction writer, best known for his script for the epic science fiction film, 2001: A Space Odyssey (1968), and for his novel of the same title.

"I want to be remembered most as a writer. I want to entertain readers and hopefully stretch their imaginations as well." —Arthur C. Clarke

Arthur was born In 16 Dec 1917, in the seaside town of Minehead, Somerset, England to Charles Clarke and Mary (Willis) Clarke He had a elder sister and two brothers[1][2][3]

Post-polio syndrome is where some of these symptoms return or get worse many years or decades after the original polio infection and includes a wide range of symptoms that develop gradually over time, including: persistent fatigue (extreme tiredness) muscle weakness. shrinking muscles.

Clarke married Marilyn Mayfield in 1953 shortly after they met . They separated and the divorce became final many years later in 1964 at Dade, Florida, USA; Certificate Number: 22190.[5]

Clarke is buried with Ekanayake his partner in Colombo's central cemetery at Sri Lanka.[6]

He died at his home in Colombo, Sri Lanka on March 19, 2008 at age 90. The cause of death was breathing problems that were attributed to Post-Polio Syndrome.

Arthur C Clarke has been knighted by Queen Elizabeth II, and he is the only science-fiction writer to be nominated for the Nobel Peace Prize.

Clarke was appointed Commander of the Order of the British Empire (CBE) in 1989 "for services to British cultural interests in Sri Lanka". He was knighted in 1998 and was awarded Sri Lanka's highest civil honour, Sri Lankabhimanya, in 2005[7]

Arthur C Clarke was also inventor, undersea explorer, but better known as a sci-fi legend and science visionary. As a writer Arthur C. Clarke’s ideas stirred and thrilled the imagination of anyone who watched his films or read his books. 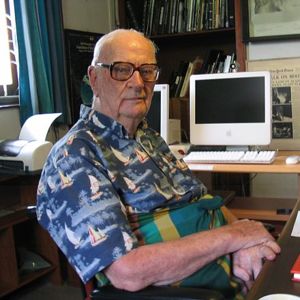