Army officer, business and political leader, and civic activist. Clarkson joined the Continental Army at the start of the Revolution and served under Benedict Arnold and Benjamin Lincoln, rising to the rank of lieutenant colonel. When Lincoln was Secretary of War from 1781 to 1783, Clarkson served as Assistant Secretary. An anti-slavery activist, Clarkson served in the New York Assembly from 1789 to 1790, and introduced a bill calling for the gradual abolition of slavery, a goal New York achieved in the 1820s. He continued to hold office and was also a civic activist, serving as a Regent of the University of the State of New York, US Marshal, New York Senator, member of the commission that built New York's first state prison, President of the New York City Hospital, and Vice President of the American Bible Society. He was a longtime vestryman of Trinity Church. For more than twenty years Clarkson was President of the Bank of New York, and he was also a successful investor and land speculator. Clarkson donated much of his wealth to support his civic and religious causes. He also continued his military service, commanding the state militia in New York City and several surrounding counties with the rank of major general, a position he held for more than fourteen years. Clarkson Street in New York City was named for him, as was the town of Clarkson in New York's Monroe County.

According to Daughters of the American Revolution, Matthew Clarkson was involved with the Revolutionary War in New York and Massachusetts, both as a Lieutenant Colonel, and via patriotic service. He served under Colonel Josiah Smith in the Suffolk County Militia; he took the Oath of Allegiance in 1778, and was taken prisoner in 1780. His first wife was Mary Rutherford, and second wife was Sarah Cornell.[1]

Clarkson was born on October 17, 1758 at his father's residence on Whitehall Street in New York City in the Province of New York in what was then British America.[3][4] He was the son of David Clarkson (1726–1782) and Elisabeth (née French) Clarkson (1724–1808). His brother, Thomas Streatfeild Clarkson, was the grandfather of Thomas S. Clarkson, the namesake of Clarkson University.

Clarkson was the great-grandson of Matthew Clarkson, who emigrated to New York and served as a patent official in the 1690s.[5] His father, Clarkson's great-great grandfather, was Rev. David Clarkson (1622-1686),[6] the English born Puritan clergyman whose sermons included "The Doctrine of Justification is Dangerously Corrupted by the Roman Church."[5] Through his mother, he was descended from Phillip French, the 27th Mayor of New York City.[7]

Career Edit At the age of 17, he entered the Army to serve in the Revolutionary War, first on Long Island, subsequently under Benedict Arnold.[3] He was at Saratoga and, later, on the staff of General Benjamin Lincoln, was present at the surrender of Burgoyne, at Savannah (1779) and at the defense of Charleston (1780). He was also present at the surrender of Cornwallis.[4]

After the war, Clarkson was commissioned brigadier general of militia of Kings and Queens Counties in June 1786 and Major General of the Southern District of New York in March 1798.[5] For a time, he was engaged in merchant business with John Vanderbilt under the company Vanderbilt & Clarkson.[8] The firm was later closed and he worked with his brother at the firm S. & L. Clarkson & Co.[3]

Matthew Clarkson When the war ended, Lincoln became Secretary of War and Clarkson became his assistant. He served as a Federalist member of the 13th New York State Legislature in the New York State Assembly for one term from 1789 to 1790, where he introduced a bill for the gradual abolition of slavery in the State.

As a Regent of the University of the State of New York he was presented at the court of French King Louis XVI. From 1791 to 1792, he served as U.S. Marshal. In 1793, he was elected to fill the vacancy, in place of Philip Van Cortlandt, as State Senator in the 17th New York State Legislature representing the Southern District, which consisted of Kings, New York, Queens, Richmond, Suffolk and Westchester counties. He served until 1795 after being reelected to the 18th Legislature, and resigning before he completed his full four year term.[9] He was also a member of the commission to build a new prison 1796-1797 and President of the New York (City) Hospital (1799).[10]

In 1802, Clarkson was the Federalist candidate for U.S. Senator from New York but was defeated by DeWitt Clinton. He was President of the Bank of New York from 1804, succeeding Herman Le Roy, and serving until his death in 1825.[11][3] He was succeeded by Charles Wilkes.[12]

On May 24, 1785, Clarkson was married to Mary Rutherfurd (1761–1786), the daughter of Walter Rutherfurd and Catherine (née Alexander) Rutherfurd and the sister of Senator John Rutherfurd.[6] Through her mother, she was the niece of William Alexander, Lord Stirling, and the granddaughter of James Alexander and Mary Alexander Provoost. Before her death in 1786, they were the parents of one child together:[6]

A fictional account of Matthew Clarkson's life can be found in the historical novel "Treason" by Robert Gessner, Charles Scribner's Son, New York 1944 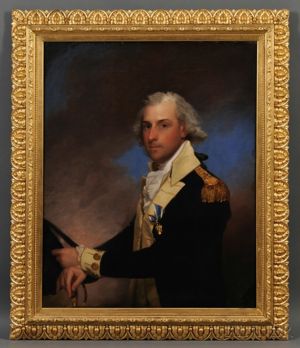