Georges Clemenceau led France in the First World War. Prime Minister of France from 1906 to 1909, and again from 1917 to 1920. He was one of the principal architects of the Treaty of Versailles.

Georges Benjamin Clemenceau was born in Vendée in 1841 in western France into a working class family. [1] His father Benjamin, a great admirer of the French Revolution of 1789 and political activist, influenced him a lot in his younger life. Georges and his siblings were raised with their parent's radical beliefs. Benjamin was an atheist and though his wife Sophie was a staunch Protestant, he would not allow the children to have any religious education. Though he respected Protestantism, Georges was an atheist too and hated the Catholic Church.

Benjamin Clemenceau was involved in illegal activities- plotting to overthrow Napoleon III. Georges met many of his associates, including Jules Michelet, a historian being hunted by the police. Benjamin spent a short time in jail in 1858.

In 1861, Benjamin brought Georges to live in Paris to study medicine. Here Georges's political beliefs were strengthened by men he met. He began a journal Le Travail (Work) with friends to promote these views. It was found and confiscated by the police. After an advertisement emerged inviting Paris workers to celebrate the fourteenth anniversary of the 1848 French Revolution, Georges was imprisoned. He spent seventy three days in the Mazas prison and started another newspaper called Le Matin immediately after his release. This was also seized by the police.

Georges graduated on 13 May 1865. He left for New York City. He arrived at the peak of the Civil War and was impressed by the system of democracy and freedom of speech. He ran out of money and when his father refused to help him, he began teaching in a girl's school in Stamford in Connecticut. He also wrote for a Parisian newspaper and taught French at the house of Calvin Rood in Massachusetts.

It was at the new private school in Stamford he taught in that he met Mary Plummer, one of his students. Despite opposition to the match, he married her after she left school. The wedding took place on 23 June 1869. The couple had three children together but later seperated for good.

Five days after his marriage, Georges went back to France with his wife to work as a doctor in Vendée. He was still drawn to politics and ended up living in Paris.

In July 1870, Napoleon III declared war on Germany. France were defeated miserably two months later. On 4 September 1870, Georges joined a mob that stormed Palais-Bourbon to support radical leader Léon Gambetta, who wanted a French republic. When Gambetta got into power, he named Georges mayor of the 18th district of Montmartre in France. On 8 February 1871, Georges was elected Radical Republican Deputy and represented the Seine department in the National Assembly. He wanted revenge on Germany for destroying the French empire.

Georges got involved with the Paris Commune and and its leaders met with the National Assembly. He tried to mediate between the two groups but was unsuccessful and forced to resign as mayor and deputy on 27 March 1871.

He ran again in 1876 for the Chamber of Deputies, that had replaced the National Assembly. He was re-elected as mayor of the 18th district. During his term he was rumoured to have played a part in the infamous Panama Canal scandal. He was also falsely accused of being in Britain's pay. Having lost the favour of the people, Georges was not re-elected in 1893.

For the next few years he focused on journalism. He had a daily column in La Justice (which he founded in 1880) and founded Le Bloc in 1900.

He was elected senator in 1902 and was back in politics. In 1906, he became prime minister of France. He built a strong relationship with Britain. In 1909, his government ran into problems and lost popularity. He was succeeded by Aristide Briand.

Still holding bitter feelings towards Germany, he demanded more military training and preparation as they were approaching World War I. He wanted to destroy Germany. In November 1917 he once again became prime minister and minister of war. He convinced the Allies to agree to a unified military command under the experienced Ferdinand Foch.

After a long and hard struggle, the Allies finally defeated Germany in late 1918. The Paris Peace Conference was held in the palace of Versailles in 1919. Georges pushed for Germany to be severely punished by total demilitarisation and reparations. He argued with American president Woodrow Wilson, who he viewed as too idealistic and soft on the Germans.

The Treaty of Versailles was eventually agreed. The old French territory of Alsace-Lorraine was granted back to France. Georges was dissatisfied at the terms, even though Germany had to accept full responsibility for the war and pay huge reparations. He believed the Germans needed to be kept extremely weak in case they ever sought revenge. The people of France also wanted an even worse punishment and blamed Georges. He was not re-elected in January 1920.

Georges retired from his long career and wrote his autobiography In the Evening of my Thought, which was published in 1929. He predicted that by 1940, there would be another great war, where Germany would rise up again. Georges Clemenceau died on 24 November 1929, aged seventy eight.

Is Georges Benjamin your ancestor? Please don't go away!

ask our community of genealogists a question.
Sponsored Search by Ancestry.com
DNA
No known carriers of Georges Benjamin's DNA have taken a DNA test. 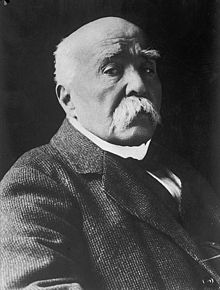