Laura was born 19 Jul 1881, in Philadelphia, Pennsylvania. She was the only child of George and Florence Clough, modest-income farmers from Philadelphia. Her mother died a few days prior to Laura's third birthday. Her father remarried in 1889, when Laura was 7. Her half-sister, Rebecca, was born five years later when Laura was 12. In 1900, the family was residing at the home of Laura's step-grandparents, William and Rebecca Graham.[1]

In 1905, Laura was a nursing student at Mercer Hospital in Trenton, New Jersey,[2] and it was there that she met Charles Scudder, one of her patients. The couple was married 4 Jul 1908, in New Jersey.[3] and initially settled on the Scudder family farm. Charles was 21 years older than Laura and had been widowed for about ten years prior to his marriage to Laura. He had three children by his first wife.

In 1915, the couple decided to move west. They lived for a short time in Seattle, Washington, before moving to the town of Ukiah in Northern California. There, Laura opened the Little Davenport Restaurant. Located across the street from the Mendocino County Courthouse, the Little Davenport became a popular hangout for local lawyers who saw her potential and encouraged her to study law. Unable to afford law school, Laura borrowed used text books and studied on her own time, between running the restaurant and taking care of her family. Eventually, she taught herself sufficiently enough to pass the Stare Bar Exam, and in 1918, became the first female attorney in Ukiah.

In 1920, the Scudders moved to a home at 2610 Chandler Ave., in Monterey Park, outside of Los Angeles, California. Interestingly, in the 1920 U.S. Federal Census, Laura was identified as an attorney, while Charles had no occupation listed. Soon, however, Charles opened the Vernon Gas Station and Garage on two acres of land located at Garvey Ave. & Atlantic Blvd. the couple moved into an adjacent building at 771 W. Garvey, and built a brick building next door which they then rented out to a barber. But the barber turned out to be a bootlegger, and Laura, who was a staunch Republican and Episcopalian, soon kicked him out. Around this same time, Laura's husband, Charles, became disabled after a car fell on him while working in his shop. In need of money, Laura took the advice of a friend, and in 1926, turned her empty brick building into a potato chip factory.

Laura had recognized a problem with the manner in which potato chips were then being distributed, typically from barrels or tins, which left the chips at the bottom stale and crumbled. To solve this issue, Laura began paying her workers to take home sheets of wax paper and iron them into the form of bags, which were then filled with chips at her factory the next day. Thus, Laura became the pioneer innovator of packaging potato chips in sealed bags in order to extend freshness. Her innovation kept the chips fresh and crisp longer and, with the invention of cellophane, allowed potato chips to become a mass market product. Laura Scudder's also became the the first potato chip company to include freshness dates on their packaging.

Because potato chips tended to sell best during the summer moths, Laura Scudder expanded her product line to include mayonnaise (1926) and peanut butter (1931), in order to keep her workforce employed year round She also published recipes to raise interest in her products and was noted for a chocolate cake recipe that used mayonnaise instead of eggs and butter. which were scarce during World War II.

After her husband Charles died in 1928, his son from a prior marriage, Charles Scudder Jr., began helping Laura out with the business. On 10 Jun 1929, Laura married Charles Jr., in Maricopa County, Arizona.[4] This was quite a local scandal at the time, despite the fact the couple were not technically related. Laura was then 39 years old, Charles was 36. In 1930, Laura, Charles and Laura's three youngest children, were residing at a home valued at $5,000, located at 112 Atlantic Blvd. In 1930, Charles was identified as a Food Product Manufacturer, while Laura was again identified as an attorney in private practice.

Always concerned about the welfare of her workers, in 1957, Laura turned down a $9 million offer for her company because the buyer wouldn't guarantee her employees' jobs. Instead, she sold her firm to Signal Oil & Gas of Signal Hill, with a $6 million offer from the buyer and guaranteed job security for her workforce. The new company was called Laura Scudder Inc. Laura continued to run the company until her death in 1959, by which point the company held more than a 50% share of the California potato chip market. In 1987, Laura Scudder Inc. was sold to Borden, Inc. for $100 million. Annual sales for the chipmaker were then $126 million.

Laura died 13 March 1959, in a Los Angeles County, California hospital. She was 77 years old.[5] She was buried beside her first husband at San Gabriel Cemetery in San Gabriel, California.[6]

Is Laura your ancestor? Please don't go away!

ask our community of genealogists a question.
Sponsored Search by Ancestry.com
DNA
No known carriers of Laura's DNA have taken a DNA test. 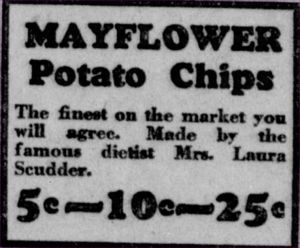 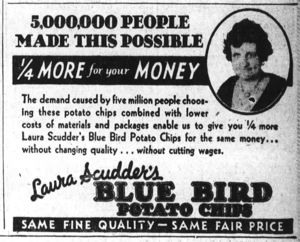 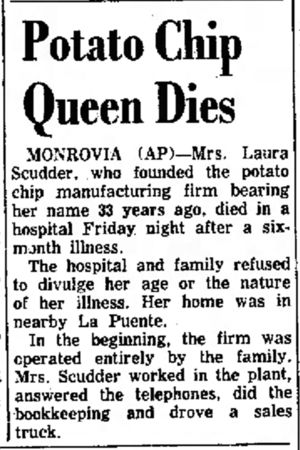 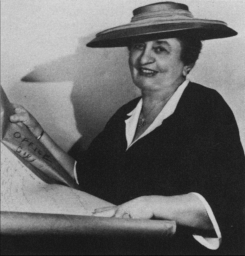