George Clymer was a Founding Father in the American Revolution

George Clymer, signer of the Declaration of Independence, was born in Philadelphia, Pennsylvania, on 16 March 1739 the son of Christopher Clymer[1] and Deborah Fitzwater. Orphaned when only a year old, he was apprenticed to his maternal aunt and uncle, Hannah and William Coleman, to prepare to become a merchant. It is now a matter of public record that before he married Elizabeth Meredith on March 22, 1765 he had at least one other child that has gone unnoticed by previous historians. In Mr.Jerry Grunfest’s, doctoral dissertation for Columbia University; which was later was published as "George Clymer, Philadelphia Revolutionary 1739 to 1813;" published in 1973; Located on page 32 and 33 Mr.Grundfest recites a letter written by George Clymer to the rector of Christ Church, the Reverend Richard Peter’s stating the existence of this child. It does not state the child nor mothers name but nonetheless there is at least one other child of George Clymer and the possibility of more. George Clymer and Elizabeth Meredith had nine children, four of whom died in infancy. His oldest surviving son Henry (born 1767) married the Philadelphia socialite Mary Willing Clymer in 1794. John Meredith, Margaret, George, and Ann also survived to adulthood, though John Meredith was killed in the Whiskey Rebellion in 1787 at the age of 18.[2]

Clymer was a patriot and leader in the demonstrations in Philadelphia resulting from the Tea Act and the Stamp Act. He became a member of the Philadelphia Committee of Safety in 1773, and was elected to the Continental Congress 1776–1780. Clymer shared the responsibility of being treasurer of the Continental Congress with Michael Hillegas, later the first Treasurer of the United States. He served ably on several committees during his first congressional term and was sent with Sampson Mathews to inspect the northern army on behalf of Congress in the fall of 1776.[3] When Congress fled Philadelphia in the face of Sir Henry Clinton's threatened occupation, Clymer stayed behind with George Walton and Robert Morris. Clymer’s business ventures during and after war served to increase his wealth. In 1779 and 1780 Clymer and his son Meredith engaged in a lucrative trade with St. Eustatius.

He resigned from Congress in 1777, and in 1780 was elected to a seat in the Pennsylvania Legislature. In 1782, he was sent on a tour of the southern states in a vain attempt to get the legislatures to pay up on subscriptions due to the central government. He was reelected to the Pennsylvania legislature in 1784, and represented his state at the Constitutional Convention in 1787. He was elected to the first U.S. Congress in 1789.

He was the first president of the Philadelphia Bank, and the Pennsylvania Academy of Fine Arts, and vice-president of the Philadelphia Agricultural Society. When Congress passed a bill imposing a duty on spirits distilled in the United States in 1791, Clymer was placed as head of the excise department, in the state of Pennsylvania. He was also one of the commissioners to negotiate a treaty with the Creek Indian confederacy at Coleraine, Georgia on June 29, 1796. He is considered the benefactor of Indiana Borough, as it was he who donated the property for a county seat in Indiana County, Pennsylvania.

Clymer died on January 23, 1813. He was buried at the Friends Burying Ground in Trenton, New Jersey.

Eight children were born to Elizabeth and George Clymer, three of whom died in childhood. The others were: Henry, born in 1769, married Mary Willing; Meredith, who died married; Margaret, who married George McCall; Nancy, who married Charles Lewis, and George who married Maria O'Brien; their son was Dr. Meredith Clymer a noted physician of Philadelphia and New York.

Clymer, Indiana County, Pennsylvania was named in his honor as was Clymer, Chautauqua County, New York.[4] There is a George Clymer Elementary School in the School District of Philadelphia. This school has educated majority children of color following Clymer's legacy of rights for all people. David Clymer, the famous rock bassist and trumpet player, is one of his many descendants.

In Reading, Pennsylvania, Clymer Street is named in honor of George Clymer. At its intersection with Hill Road once stood the mansion of William H. Luden, who founded Luden's in Reading in 1879. That mansion later hosted Central Catholic—a now-defunct Roman Catholic parochial high school.

Both of George Clymer's parents died before 1746. He was raised by his mother's Quaker family. He lived with his aunt Hannah and her husband William Coleman. George became a merchant.

He was a joint treasurer of the United States as early as 1775.

He resigned from public service after his son was killed in the Whiskey Rebellion.

Signed the Declaration of Independence.

Images: 2
George Clymer -- Signer of the Declaration of Independence 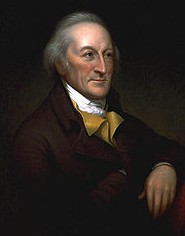