David was readied for college by Joseph Marsh Jr, who had a Latin private school in Braintree, Massachusetts.[2] He graduated from Harvard College in 1766.[3][2] David studied medicine with Dr Perkins, and settled in Taunton in 1766.[3][2] He married Eleanor Bradish that same year.[2]

David was a Major General in the Continental Army, an Adjutant and Trusted Loyal Aid to General George Washington, and a Hero of the American Revolution in Massachusetts. [4]

By 1796 he had moved to Gouldsborough, having been appointed agent of the great Bingham estate in Eastern Maine.[2] In Gouldsborough he laid out roads, and built wharves, storehouses, saw mills[3] and ships.[2] During this time, he stayed heavily engaged in political duties. The management of the Bingham estate passed to the hands of his son-in-law in 1820.[2] His health not well, he removed to Taunton, to live with his children.[2] His wife, Eleanor, had died in 1808.

In the year 1829, David moved to the Massachusetts General Hospital in Boston. He died there on the 17th of April 1830,[1] and was buried by his wife in Taunton.[2]

In 1777 David joined the Army as a Lieutenant Colonel of the 16th Massachusetts Regiment; serving under Colonel Henry Jackson.[2][3] In 1785 he was elected Major General of the 5th Division of Massachusetts Militia.[2][3]

The Maine Historical Society states his birth date was 14 Sep 1748.

ask our community of genealogists a question.
Sponsored Search by Ancestry.com
DNA Connections
It may be possible to confirm family relationships with David by comparing test results with other carriers of his Y-chromosome or his mother's mitochondrial DNA. Y-chromosome DNA test-takers in his direct paternal line on WikiTree: It is likely that these autosomal DNA test-takers will share DNA with David: 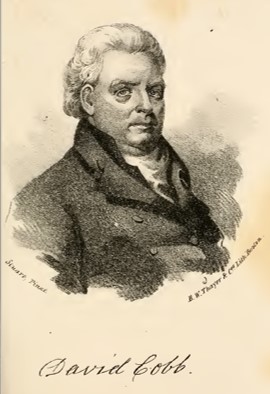 David is 19 degrees from Danielle Liard, 12 degrees from Jack London and 14 degrees from Henry VIII of England on our single family tree. Login to find your connection.