Tyrus Raymond "Ty" Cobb, nicknamed "The Georgia Peach," was an American Major League Baseball (MLB) outfielder[1]. Cobb spent 22 seasons with the Detroit Tigers, the last six as the team's player-manager, and finished his career with the Philadelphia Athletics[1]. In 1936 Cobb received the most votes of any player on the inaugural Baseball Hall of Fame ballot, receiving 222 out of a possible 226 votes.[1]

Ty grew up in the city of Royston[5], and played and followed baseball there passionately. When he was old enough, he played for the Royston Rompers, the Royston Reds, and briefly for the Augusta Tourists.[1] Once he joined the Anniston Steelers, he began promoting himself by sending anonymous postcards to the local writer that talked about his great skills as an up-and-coming player. He was eventually to return to the Tourists, and then have his contract sold to the Detroit Tigers in August 1905.[1]

On August 8, 1905, in the same month he was to begin playing for the Tigers, his mother accidentally fatally shot and killed her husband. This act spurred young Ty along to play harder than ever before, claiming that he was doing it for his father, since his dad never got to see him play professional baseball.[1]

Ty was immediately thrust into center field, and as his skills increased through the years, so did his salary. He was a tremendous player, batting well and stealing bases like no other. He was known for occasionally stealing third and even home plate when the opportunity presented itself. He was also known for his short temper which quickly turned to violence, even from time to time upon his own teammates.[1] However, according to a new biography (2016), his reputation was unfairly maligned for decades, and he was not the cartoon racist portrayed in earlier biographies.[6]

Ty registered for the World War I draft.[2] He is listed as a ball player and was exempt from service due to dependents. He was playing for Detroit at the time. In 1918 he served on the Western Front as a captain in the Chemical Warfare Service, 1st Gas Regiment.

In 2009 the Calhoun County Commission & the City of Anniston, Alabama erected a Historical Marker on the site where Ty lived while playing minor league baseball for the Anniston Steelers. The inscription reads:

"In 1904, 18 year old Tyrus Raymond Cobb lived in a boarding house on this site while playing minor league baseball for the Anniston Steelers. From nearby Scarbrough Drug Store on Noble Street he wrote letters, using fictitious names, to sports writer Grantland Rice, describing what a great baseball player Cobb was in Anniston. These letters resulted in a scout from the Detroit Tiger organization coming to Anniston and discovering Ty Cobb, who became the greatest baseball player of all time."

Is Ty your ancestor? Please don't go away!

ask our community of genealogists a question.
Sponsored Search by Ancestry.com
DNA Connections
It may be possible to confirm family relationships with Ty by comparing test results with other carriers of his Y-chromosome or his mother's mitochondrial DNA. However, there are no known yDNA or mtDNA test-takers in his direct paternal or maternal line. It is likely that these autosomal DNA test-takers will share DNA with Ty: 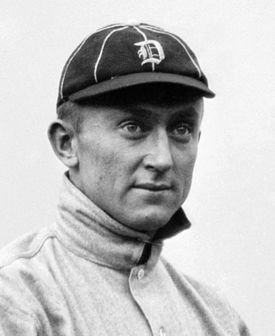 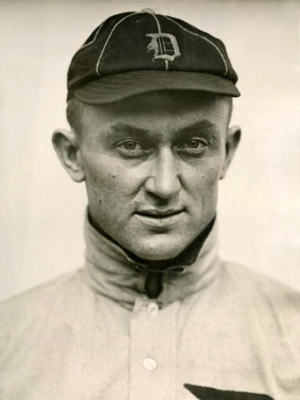 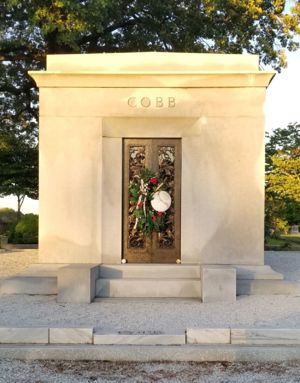 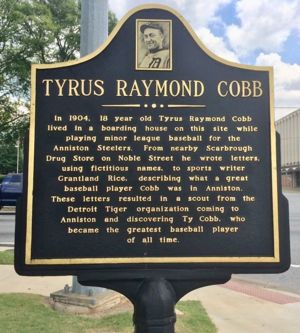 Leave a message for others who see this profile.
There are no comments yet.
Login to post a comment.
John Voltz Jr
Interesting youtube video about Ty Cobb: https://www.youtube.com/watch?v=XzbJn2UAoIs
posted Apr 03, 2017 by John Voltz Jr