Nellie (Cochran) Seaman was a part of the Suffragette Movement.

Nellie was born Elizabeth Jane Cochran on May 5th 1864 in Cochran Mills, Armstrong Co., Pennsylvania to Mary and Michael Cochran. Nellie also had younger siblings whose name and gender were not mentioned. "Cochran Mills" is part of the Pittsburgh suburb of Burrell Township, Armstrong County, Pennsylvania. Her father, Michael Cochran, was a modest laborer and mill worker who married Mary Jane. Cochran taught his young children a cogent lesson about the virtues of hard work and determination, buying the local mill and most of the land surrounding his family farmhouse.

As a young girl Bly was often called "Pinky" because she so frequently wore the color. Elisabeth was the thirteenth of her father's fifteen children (born to her father’s second wife). When she was six years old her father died, leaving her family in near poverty because he neglected to include his second family in his will. Her mother, penniless, entered into a disastrous second marriage with an alcoholic which ended in divorce in 1879. Nellie’s stepfather was abusive, the struggle Nellie had to endure with her stepfather built the foundation for Nellie to become successful in women’s rights. At age 15, Elisabeth wanting to become a teacher to help support the family, attended the Indiana Normal School. However, money ran out after the first year, forcing her to quit. She and her mother moved to Pittsburgh, where they ran a boarding house.

While in Pittsburgh, Elizabeth read an article by a columnist condemning working women and offering the opinion that women only belonged in the home doing domestic tasks. In response Elizabeth wrote an indignant letter to the newspaper, Pittsburgh Dispatch. The newspaper editor was impressed by the letter, offered her a job and gave her the pen name Nellie Bly.

Nellie Bly was a 19th century marvel, she was a well known journalist who was famous for her asylum exposé in 1887, Nellie had faked insanity for a better look inside the women’s asylum, another achievement of Nellie's was her journey around the world in 72 days.

While It was improper for women to use there real names when publishing articles in the newspaper, after much deliberation Madden chose the name “Nellie Bly” after the song written by Stephen Collins Foster. While Nellie was working at the paper she preferred to write about women’s rights. Nellie went undercover in a sweatshop to uncover treacherous working conditions in which women worked. Nellie reported these findings in her column, however the owners of the sweatshop paid the paper for advertisements and threatened to withdraw their ads if Nellie continued to expose them. Nellie was then assigned to fashion, in which she was displeased, so she traveled to Mexico for six months, still reporting for the newspaper she reported on political corruption and poverty. Eventually Nellie’s articles got her kicked out of Mexico by the government. Nellie then traveled back to the United States and instead of going back to Pittsburgh she went to New York. Nellie was in New York four months and still hadn’t found work Nellie decided to take matters in to her own hands, she stormed in to the New York World requested an audience with the managing editor and impressed her with her ideas.

In September 1887 Nellie was accepted to the New York world, her first assignment was to be committed to the women’s insane asylum on Blackwell’s island, she first practiced her “crazy faces” getting ready to fake her insanity, Nellie checked in to a boarding house and started calling people crazy, they soon concluded she was crazy and called the police.

When in front of the judge she claimed to have amnesia, the judge declared she was drugged, but after an examination she was proclaimed “insane” and sent to Blackwell’s asylum. Once inside she observed the food to be gruel and very bland, also the eating area was contaminated by waste and scurrying rats! Nellie proclaimed the water undrinkable, and the nurse’s behavior was unacceptable towards to clients exhibited by making patients chained up to sit on cold benches from 8 am to 9pm, also dumping cold water over their head for bath time.

Ten days later the New York World requested her release, upon release her report on the experience was made in to a book called Ten Days in a Mad House.

The report brought up much controversy, which leads to a chain of events involving Nellie; there were significant changes in funds and conditions for the mentally ill ($850,000).

In 1888 Nellie had the idea to travel around the world, her boss approved it and she made a world record of 72 days.

Nellie eventually married April 5, 1895 at age 31 to industrialist Robert Seamen age 71 who was a millionaire of a manufacturing company. Seaman was forty years her senior, and they married after a two week romance. Nellie retired from journalism and became president of the company. That same year her husband died and she took over the company, due to mismanagement the company went bankrupt and Nellie was forced back in to reporting, deciding to take a trip to Europe world war one broke out and she stayed there and report it. [1]

During World War I, she began reporting again. She was working for the New York Journal when she died of pneumonia in 1922, at the age of 58. Before Nellie died she requested her niece to take care of a few children in the orphanage that she had taken interest too. Nellie Bly was an important part of humanity, especially women's rights, Nellie Bly made a dent in history and will stay there as long as people continue to look to the past.

Not only was Elizabeth a pioneer in investigative reporting, but many people considered her the best reporter of her time.

Elizabeth Cochran was born in Cochran’s Mills, Pennsylvania. She was one of fifteen brothers and sisters. People called her Pink because her mom would dress her in a lot of pink dresses. Her dad died just after her sixth birthday. Her dad didn’t leave a will, forcing their house to be auctioned off. Her mom soon remarried to an abusive husband. Elizabeth went to the Indiana Normal School when she was fifteen years old, to become a teacher. She had to stop going because she didn’t have enough money to continue going to that school. After, her and her mom moved to Pittsburgh, when she was sixteen. When she was eighteen, she sent a letter to the editor of the Pittsburgh Dispatch about a sexist article. The editor thought her letter was so good that he gave her a job. This job jumpstarted her career as a journalist. She used the name Nellie Bly when writing her articles because women didn’t use their real names when writing. The editor wanted her to write girly pieces; instead she went to Mexico and wrote about the problems there. The government found out that she was writing about them and they ordered her out of the country. The articles she wrote were then put into a book called Six Months in Mexico. Nellie left to New York City and thought it would be easy to find a job. She couldn’t find a job and soon ran out of money. She then, tricked one of the guards at New York World to let her in. The editor was so impressed that he hired her. Nellie’s first assignment was to get committed into an insane asylum, so she could write about the unfairness within the institution. Her boss took her out ten days later. She wrote a book called, Ten Days in a Madhouse, about her experience in the mental asylum. She started to write articles about women’s issues. Her next big assignment was to see if she to travel around the world in less than 80 days. She made it back in 72 days, but then resigned because she was mad that her editors didn’t congratulate her for making it back. After, she married Robert L. Seaman, a millionaire, in 1895. When he died she took over his manufacturing businesses, by 1910 the company was forced into bankruptcy. After, she went on vacation, to Europe, to ease her stress. She went at the start of World War One. She became the first woman war correspondent. She spent four years in Europe. When she got home, she started writing an advice column for the New York Evening Journal. She died at the age of 57, in 1922, of pneumonia. Nellie Bly was one of the best woman reporters in history.[2]

Further Commentary by James Fell from his Book, " On This Day in History Sh!t Went Down". "Born Elizabeth Cochran near Pittsburgh in 1864, when she was 16, she read a column in the Pittsburgh Dispatch titled “What Are Girls Good For?” and the answer the author provided was basically “making babies and doing housework.” Nellie was all oh fucking hell no and wrote a response and the editor was impressed with her prose and gave her a job. She took on the pen-name Nellie Bly. She began with investigative writing about the harsh lives of working women, and when factory owners complained about being exposed as douchebags the paper moved her to writing about fashion. She said fuck you and went to Mexico and spent six months writing about that, publishing it in a book. What made her really famous was when she was 23, Nellie pretended to be insane to get locked up in the Women’s Lunatic Asylum on Blackwell’s Island (now called Roosevelt Island) in New York as an undercover assignment. She wrote about the deplorable conditions for New York World, which was owned by that Pulitzer guy, and Ten Days in a Mad-House became a book that caused a massive sensation, and the asylum was forced to implement reforms. Her heroic stunt launched a new form of investigative journalism. Ready for another adventure, on November 14, 1889, with two days’ notice, she left Hoboken on a steamship headed for Europe to prove that Verne’s circumnavigation could be completed in under 80 days. One of her stops was in France where she met the inspiring author Jules Verne himself. She sent telegraphs along the way to report on her travels. She traveled across Asia mostly by rail; in China she visited a leper colony and in Singapore she bought a pet monkey that she took back to the U.S. with her. She completed her trip around the world in 72 days and wrote yet another book about her adventures, although some dude couldn’t abide a woman being a world record holder and beat it a few months later, but Nellie was first to do it in under Verne’s 80 days. In 1998, Nellie Bly was inducted into the National Women’s Hall of Fame. The New York Press Club has a journalism award named after her.


Memories: 1
Enter a personal reminiscence or story.
eleanor wilson
"Could I pass a week in the insane ward at Blackwell's Island? I said I could and I would. And I did."

"But here let me say one thing: From the moment I entered the insane ward on the Island, I made no attempt to keep up the assumed role of insanity." - Nellie bly

posted 29 Oct 2009 by eleanor wilson
Login to add a memory.
Is Nellie your ancestor? Please don't go away!

ask our community of genealogists a question.
Sponsored Search by Ancestry.com
DNA
No known carriers of Nellie's ancestors' DNA have taken a DNA test. 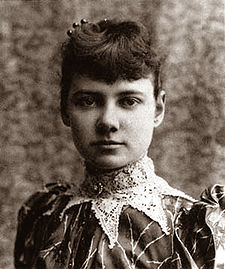 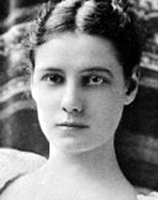 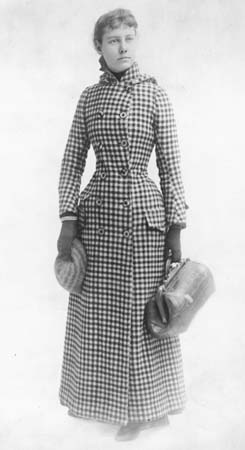 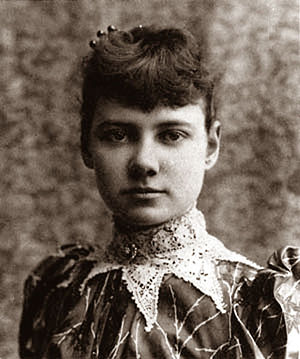 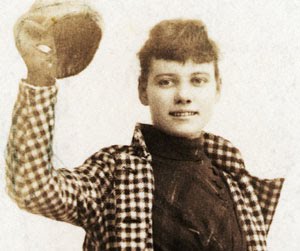 Leave a message for others who see this profile.
There are no comments yet.
Login to post a comment.
Whitney Rapp
It would be great if the privacy of her parents was changed to better connect her to the greater family tree!
posted Oct 16, 2018 by Whitney Rapp