Residence: Samuel Cochran moved to Sumner County, Tennessee in 1818 and on the 6th of January 1819 purchased for $918.50 two hundred and ten acres of land on Caney Fork off Drakes Creek in the Corinth Community.

Property: Purchased for $918.50 two hundred and ten acres of land on Caney Fork off Drakes Creek in the Corinth Community.

Will: His entire estate to his wife, Sarah until her death or marriage.

Date: 8 March 1835
Note: The children appear to be listed in order by their year of birth.

In the name of God Amen,

Know all men by these presents, that I Samuel Cochran Senior of the County of Sumner and State of Tennessee, knowing the certainty of death and the uncertainty of life, and being of sound and disposing mind and memory blessed be Almighty God for the same, have thought proper to make and publish this my last will and Testament and by these presents do now make and publish this my last Will and Testament in manner and following to wit. 1st. I will my soul to God who gave it and my body buried in a descent Christian burial. 2nd. I give to my beloved wife Sarah Cochran all of my estate real and personal, with the one exception hereinafter made, during her natural life or widowhood. 3rd. At the death or remarriage of my wife Sarah Cochran I wish my Executors to strictly attend to executing this my will in the following manner, viz, I wish my daughter Nancy Oyle after the death or marriage of my wife to have out of my Estate two hundred and Eighty two dollars, Eighty Seven and one half cents, and the lawful heirs of my late daughter Jemima Hodge now deceased, to have the sum of three hundred and forty two dollars and 87 1/2 cents, my daughter Sarah Hodges the sum of three hundred and ten dollars 37 1/2 cents, my son William B. Cochran the sum of two hundred and Seventy Two Dollars 82 1/2 cents, my son Danl. Cochran, the sum of one dollars, my daughter Polly Mattox the sum of three hundred and Forty two dollars 87 1/2 cents, my daughter Elizabeth Brizendine the sum of three hundred and forty two dollars 82 1/2 cents, and my son Saml. Cochran, three hundred and forty two dollars 82 1/2 cents should my estate be worth so much if not then I wish them to have a preparation to said mentioned sum, but if after paying over said sum there should be a remainder then I wish it equally divided among the aforesd distributees I wish and bequeath to my son Saml Cochran one hundred acres of land to come out of the North West corner of the survey I now live on in the following form beginning at the North west corner of said Survey running East a sufficient distance so that a strate line as near a South course as may be will miss both plantation passing the plantation a short distance

thence running east and thence south for enough to make the complement of one hundred acres, thence west to the west bordering line, and thence North to the beginning to him and his heirs forever and to them and their heirs forever. I wish all my just debts and funeral expenses paid I hereby appoint my son Samuel Cochran and my son in law John B. Brizendine my executors to this my last Will and Testament and I hereby revoke all former wills heretofore by me made, ratifying and confirming this my last will and testament. in witness whereof I hereunto set my hand and affix my seal this 8th day of March in the year of our Lord one thousand eight hundred and thirty five. Samuel Cochran (seal) Signed sealed and acknowledged to by the above named Samuel Cochran to be his last Will and Testament in the presence of us who have Subscribed our name as witnesses in presence of the Testator.M. Hodges, Thos. P. Freeland

February Term 1842--The last will and Testament with the codicil thereto annexed of Samuel Cochran deceased was produced in open court for probate and was duly proved by the oaths of Meredith Hodges and Thos. Freeland subscribing witnesses thereto which is ordered to be recorded. Wm. S. Munday Clk.

ask our community of genealogists a question.
Sponsored Search by Ancestry.com
DNA Connections
It may be possible to confirm family relationships with Samuel by comparing test results with other carriers of his Y-chromosome or his mother's mitochondrial DNA. However, there are no known yDNA or mtDNA test-takers in his direct paternal or maternal line. It is likely that these autosomal DNA test-takers will share DNA with Samuel: 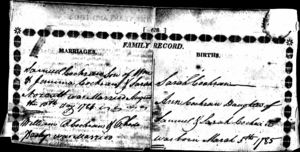 Samuel is 19 degrees from Danielle Liard, 16 degrees from Jack London and 13 degrees from Henry VIII of England on our single family tree. Login to find your connection.