Buffalo Bill Cody was a scout of the Western United States Frontier and Wild West showman.[1]

William Frederick Cody was born on February 26, 1846 on a farm just outside Le Claire, Iowa, the son of Isaac and Mary Ann Bonsel (Laycock) Cody.[2][3] William was baptized in the Dixie Union Chapel in Peel County, Ontario, Canada in 1847.[1] The church was built on land donated by his grandfather, Phillip J Cody.[1] The Codys lived in Toronto until 1853 when Isaac sold the land he owned in Iowa and moved to Kansas.[1][3]

The Codys settled in Salt Creek Valley in Leavenworth County, Kansas where Bill's father took up a claim and made friends with the neighboring Native Americans by offering them hospitality.[1] Isaac once invited 200 local natives to a barbecue.[4] Bill learned to hunt with a bow and arrow from his new friends.[4] There were also hardships that taught him many lessons.

Bill's father was an abolitionist. At one point, Bill rode his pony 30 miles to warn his father that pro-slavery neighbors were coming to kill him, an act that saved his father's life. Soon after, they stole the pony which left Bill without a way of making an income. In June 1856, Bill and his father were on a trip into Fort Leavenworth and Bill's father gave a speech outside a local bar and was stabbed in the back. Afterward, Isaac became a hunted man and left his family for Cleveland, Ohio. The family was under constant attack and ill-treatment from the neighbors, who took their belongings and forced Bill's mother and sister to accommodate. In the spring of 1857, Bill's father returned to his family very ill from his previous wound; he died March 10, 1857.[1] Bill was forced to seek work to support his mother and siblings.[5]

For the next few years, Bill worked for Russell, Majors and Wadell, the parent company of the Pony Express.[1] In an early job as an extra hand with a large wagon train driving freight, he experienced his first attack by Native Americans. He gained notoriety in the newspapers of the time due to his young age.[4] Bill became a rider for the Pony Express at age 14.[1]

During the U.S. Civil War, Bill served first as a Union Army Scout in campaigns against the Kiowa and Comanche, and later enlisted in the 7th Kansas Calvary.[6] He served as a private in Company "H" from 1863 to the end of the war in 1865.[6] Bill earned his nickname, Buffalo Bill, after the Civil War when he had a contract to supply Kansas Pacific Railroad workers with buffalo meat.[7] He reported to have killed 4,282 American Bison (Buffalo) in eighteen months during 1866-67.[7]

Beginning in 1868, Bill returned to his work for the U.S. Army.[7] He was chief of scouts for the Fifth Cavalry and took part in 16 battles, including the Cheyenne defeat at Summit Springs, Colorado, in 1869.[7]

Bill Cody was awarded the Medal of Honor.

On April 26, 1872, while traveling along Nebraska’s Platte River near Fort McPherson as scout for the Third Cavalry, Bill was awarded the Medal of Honor for his “gallantry in action”, although this award was revoked in 1916 on the grounds that Cody was not a regular member of the armed forces at the time. (The award was restored posthumously in 1989).[8][9]

Bill joined his friend, Texas Jack Omohundro in The Scouts of the Prairie, one of the original Wild West shows produced by Ned Buntline, December 1872.[7] During the 1873–1874 season, Cody and Omohundro invited their friend James Butler, "Wild Bill" Hickok, to join them in a new play called Scouts of the Plains.[4] The group toured for ten years.[1]

In 1883, Buffalo Bill started his own show,Buffalo Bill's Wild West, which was a touring variety show.[7] In 1893, Cody changed the title to "Buffalo Bill's Wild West and Congress of Rough Riders of the World".[7] The show began with a parade on horseback, with participants from horse-culture groups that included US and other military, Native Americans, and performers from all over the world in their best attire. [7] A wide variety of ethnicities displayed their distinctive horses and colorful costumes. Sitting Bull appeared with a band of 20 of his braves.[7]

Bill's show had other well known performers including Annie Oakley and her husband Frank Butler, Gabriel Dumont, Lillian Smith, and Calamity Jane.[10] Performers re-enacted the riding of the Pony Express, Indian attacks on wagon trains, and stagecoach robberies.[10] The finale was typically a portrayal of an Indian attack on a settler's cabin.[10] Cody would ride in with an entourage of cowboys to defend a settler and his family. The show influenced many 20th-century portrayals of "the West" in cinema and literature.[10]

Buffalo Bill took his company to Great Britain in 1877 to celebrate the Jubilee year of Queen Victoria. Queen Victoria attended a performance. Bill did quite well in Europe, touring in 1889 and in 1890, even meeting Pope Leo XII. He had an exhibit at the Chicago World's Fair of 1893. This exposure made him even more popular.[11][12]

In 1908, Pawnee Bill and Buffalo Bill joined forces and created the "Two Bills" show.[citation needed] That show was foreclosed on while playing in Denver, Colorado in <date>.[citation needed]

Besides his touring shows, Bill Cody was instrumental in the founding of the town of Cody, Wyoming. He fought for a hunting season and other restrictions to protect the diminishing buffalo.[7] He and his associates introduced an irrigation system by diverting water from the Shoshone River, which failed due to lack of money for a holding system. However, this did not discourage them. Early in 1903 they joined with the Wyoming Board of Land Commissioners in urging the federal government to step in and help with irrigation development in the valley. This eventually resulted in the construction of the Shoshone Dam which was renamed to Buffalo Bill Dam and Reservoir by an Act of Congress.

Buffalo Bill Cody died of kidney failure on January 10, 1917, in Denver, Colorado, one day after he was baptized into the Catholic Church.[13] He received a full Masonic funeral at the local Elks Lodge Hall.[10]

On June 3, 1917, Cody was buried on Colorado's Lookout Mountain in Golden, Colorado. The Buffalo Bill Memorial Museum is located there now.[14][10] His wife is buried with him.[10]

In 1948 the Cody chapter of the American Legion offered a reward for the "return" of his body, so the Denver chapter mounted a guard over the grave until a deeper shaft could be blasted into the rock.[15] <explanation of what this means?>

Sponsored Search by Ancestry.com
DNA
No known carriers of Bill's DNA have taken a DNA test. 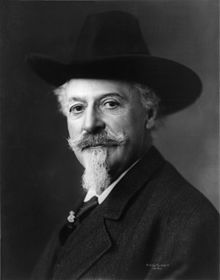 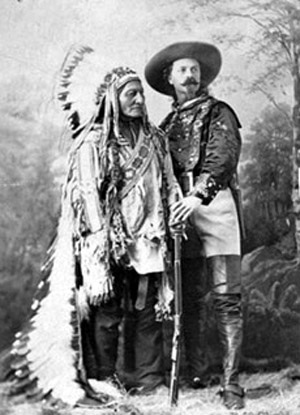 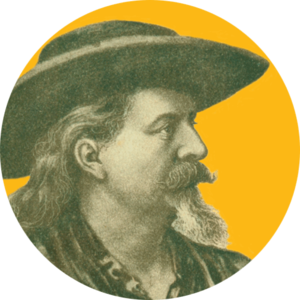 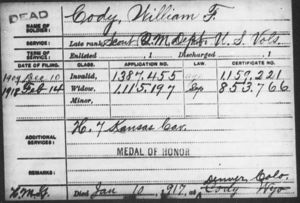 Leave a message for others who see this profile.
There are no comments yet.
Login to post a comment.
[Living Teague]
My father, Charley Teague Jr. was in the US Army Cavalry during his 3 year enlistment from 1912 - 1915. His unit was selected to be part of a moving picture

project from the Army, in a battle scene depicting the "Battle of the Wounded Knee". He was also selected to be one of the causalities of the battle, falling off his mount. Unknown to him, the teepee's were constructed of cheesecloth and his plan to soften the fall was quite flawed. As he was getting up and recovering, the officer in charge of this movie had walked up close to him and was conferring with William Cody. Cody had been hired to help give advice, insuring an authentic re-creation for the movie. As a young soldier, my father was struck with such a well known figure so close at hand but wisely did not try to speak.

As told to me, his son, Lyle Teague

Steve Cole
I saw the link to: Did WB Cody visit Your Town? I have been searching to find out if Cody came to my town during the Civil War.

The 7 Kansas Cavalry operated out of Memphis and guarded the M&C RR out to Corinth. The regiment returned to Kansas to recruit more men & that is when Cody enlisted into Company H. I forget if it was Feb 1863 or 64. They returned to Memphis area for a few months. I live in Collierville, TN, 24 miles by rail from old Memphis depot. Cavalry units sometimes went on patrols by company but did Company H ever come here? BTW I have a copy of a journal of a soldier in 7 KS Cav but it doesn't mention my town anytime after Cody joined the regiment.

Abby (Brown) Glann
Hey Ladies! Would you make Wild West or the Iowa project a manager and knock Notables down to a trusted list member? Thank you much!
posted Jan 04, 2018 by Abby (Brown) Glann

Steve Cole
I posted a brief history of the 7th Kansas Cavalry with information of when Bill Cody joined the regiment. The 7 Kansas Cavalry served in the Memphis area and made several cavalry patrols into Northern Mississippi and Alabama.
posted Mar 05, 2015 by Steve Cole