Although his tombstone gives his middle name as Burgess, he is listed in the Hantsport, Hants County 1911 Census as George E. Coffin. Burgess was his mother's maiden name and Mary Elizabeth (Burgess)Coffin had already named her oldest son Francis Burgess Coffin, which leads me to believe that George was mistaken about his middle name. It is even possible that he changed his middle name to burgess out of sibling rivalry with his brother. I have always thought it strange that my grandmother would give the same name to two of her sons. I think his name was either George Edward or George Edwin. However as Tom Joad, the main character in John Steinbeck's "The Grapes Of Wrath" said, "Saying it don't make it so.", either on a tombstone or for that matter, here in this profile! DWC Coldwell-1 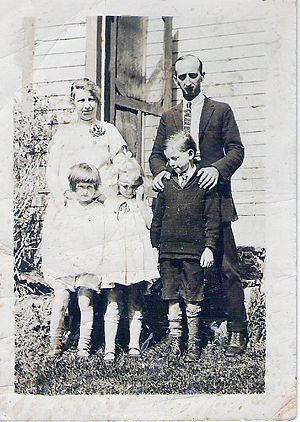