This profile is part of the Haverhill, Massachusetts One Place Study.

In 1639/40, he was made churchwarden of the parish church (his customary pew in the front of the chancel is marked on a plan made in 1638) and in 1641 a parish constable-holder, one of the offices created under the Elizabethan reforms. A difficulty arose between him and Thomas Maynard of Brixton, gentleman, which in midsummer of 1641 was referred to arbitration. The outcome remains unknown but it is speculated this may be one reason he left for New England.

Tristram belongs among early immigrants whose reason for leaving England is hard to pinpoint. Like Robert Clements, with whom he is said to have come, he had estates in England owning property in Dorset and Devon. He was landed gentry and not a Puritan. He left for New England at age 37 in the year of crisis between Charles I and Parliament bringing with him his wife, five children, his mother and some state two of his unmarried sisters. It is stated that his younger brother John was wounded at the battle of Plymouth Fort and died eight days later. If true it may have been a factor in Tristram's decision to emigrate. Clement and Coffin family tradition places the men coming together on a ship owned by Robert Clement but nothing exists to prove the name of the vessel.

Tristram settled at Salisbury for a few months moving shortly to Haverhill (Pentucket) where with the other inhabitants he obtained of the Indian Sachems the deed of the township.[2][3]

Tristram settled in Haverhill near to the Clements and tradition states again that he was the first person to plough land in the town, having constructed his own plough. With Robert Clement he was made a freeman in Haverhill in Nov. 1645. About 1643 he moved to another part of Haverhill called the Rocks where he was licensed to keep a tavern "Coffins Ordinary"[4] and before 1647 he moved to Newbury then in 1648 to Salisbury, in 1649 to Newbury again and finally in 1654 to Salisbury.[5]

While a resident of Salisbury, before his departure for Nantucket he was a commissioner or Justice of the Peace and signed a Salisbury petition in 1658.[6]

About 1658 Tristram formed a company for the purchase of Nanctucker and moved there in 1659. It is disputed why Tristram went to Nantucket. The probability is that it came through his acquaintanceship with Thomas Macy a cousin of Thomas Mayhew who owned the island by purchase from the agents of Sir Ferdinando Gorges and Lord Sterling. Mayhew who was governor of Martha's Vineyard probably wanted Nantucket settled and offered the land very cheaply to Coffin, Macy and their associates. The first records of the proceedings in regard to Nantucket were kept at Salisbury but after the island came under the jurisdiction of New York the records were kept at Albany where they are still to be found.

Early in 1659, Tristram went to Martha's Vineyard where he took Peter Folger the Grandfather of Benjamin Franklin as an interpreter of the Indian language and went to Nantucket to ascertain the temper of the Indians and the capabilities of the island so that he could report to the citizens of Salisbury. When he returned to Salisbury, a company was organized for the immediate purchase of the whole island allowing Thomas Mayhew to retain a one-tenth portion with some other reservations.

Late in the season of 1659 the first settlers arrived including Thomas Macy and his family, Edward Starbuck, Isaac Coleman, and James Coffin. Tristram built his home near Capaum Pond and resided there until his death.

At a meeting held at Nantucket, 15 July 1661, of the owners residing there it was agreed that each man choose his house-lot within the limits not previously occupied and that each lot shall contain sixty rods square. Tristram appears to have been allowed to make the first selection.

Tristram was 55 years old at the time of his moving to Nantucket. It does not appear that his mother, Joan Coffyn ever lived in Nantucket since she died in Boston in May, 1661. The Rev. Wilson who preached the funeral sermon spoke of her as a woman of extraordinary character. Sewall's Diary which recorded her death says that he "embalmed her memory".

For several years after this Tristram, with his sons, held the controlling interest in the Islands, he being the wealthiest man there except for his son Peter. With his sons he bought the island of Tuckernuck after trying to have his other associates join in the purchase.

Tristram assumed the obligation to construct a cornmill, built and maintained it. He employed large numbers of Indians on his land. Nantucket historian Benjamin Franklin Folger says of him: "The christian character which he exhibited and which he practically illustrated in all the varied circumstances and conditions of that infant colony, is analogous to that which subsequently distinguished the founder of Pennsylvania so that the spirit of the one seemed to be but the counterpart of the other."

It has been written that problems with the Native Americans began only after they had been introduced to rum. The first General Court for Nantucket and Martha's Vineyard composed of Tristram Coffyn, first chief magistrate of Nantucket and Thomas Mayhew, first chief magistrate of Martha's Vineyard and two associates from each island enacted a law prohibiting the sale of intoxicating drinks to Indians. The law was occasionally enforced and John Gardner (whose gravestone alone marks the spot where the settlers were first interred) complained to Governor Lovelace, 15 Mar. 1676 that a half barrel of rum had been taken from him by Thomas Macy. Gardner also said that the Indian Sachems stated they would fight if the laws against them were enforced. The letter of Thomas Macy to Governor Lovelace, 9 May 1676 shows the fear of the Indians if strong drink was allowed to be sold to them and he asked the Governor to prohibit any ship coming into the harbor from selling strong drink to Indians. It also seems that the Court on one occasion took possession of all the liquor on the island and dispensed it in small quantities to the settlers.

The town voted to have a harrow for the use of the inhabitants and Tristram was to provide the harrow and he along with Thomas Macy were empowered to see that every man sowed seed "according to order".

In 1675-76 the question of whether New York or Massachusetts would be the governing authority loomed large and the islanders lined up on one side or the other. The feeling for accepting the jurisdiction of Massachusetts instead of New York grew stronger. Tristiam was appointed Chief Magistrate of Nantucket by Governor Andros in 1667 (perhaps in hope of settling the controversy), and again by Governor Lovelace on 29 June 1671. Tristram held the office of Governor until 1680 when John Gardner was appointed.

During his entire residence on Nantucket he resided near Capsum, for the most part at a house that he built and named Northam. His house lot was a tract of the usual dimensions, bounded on the north by Cappam Harbor. The spot where his house was placed is marked by a stone monument. The interests which he and his sons and sons-in-law represented gave him power to control, to a large extent, the enterprises of the island.

Tristram in 1680 was brought into Court for an infringement of the Admiralty law. A ship having been cast away was salvaged by the people of the Island while he was magistrate and he neglected to make an accounting satisfactory to the Court. He was penalized for the full amount of her estimated value and this after he had parted with all of his property excepting enough for the old age of himself and his wife. The court evidently thought the fine excessive and remitted a part of it, Capt. John Gardner standing his friend in this. The court accepted £150 in full payment, 6 Nov 1680.

Less than a year later Tristram died on 2 Oct 1681[7] leaving a very small estate as he had given most of it away to his sons and daughter and the fine inflicted by the Court of Admiralty took a large amount of the residue.

Go here for text of the Will with property record citations.

Perhaps the most historically significant descendant is his third great grandson Levi Coffin known as the "president" of the Underground Railroad.

Some branches of the Coffin family were prominent in New England, grouped among the so-called Boston Brahmins. For example, Elizabeth Coffin, daughter of a wealthy merchant from Nantucket, was mother of the prominent Massachusetts industrialists Henry Coffin Nevins and David Nevins, Jr.

In the eighth generation, Elizabeth Coffin (1850-1930), an artist, educator and Quaker philanthropist, was known for her paintings of Nantucket and for helping revive Sir Isaac Coffin's school with a new emphasis on craft.

A free-space page has been created to hold various reference materials, court records, elements of the previous profile, etc. It may be found at Tristram Coffin Free-Space Page

Sponsored Search by Ancestry.com
DNA Connections
It may be possible to confirm family relationships with Tristram by comparing test results with other carriers of his Y-chromosome or his mother's mitochondrial DNA. Y-chromosome DNA test-takers in his direct paternal line on WikiTree:

His image on a coin

The Tristram Coffin House, built in 1652 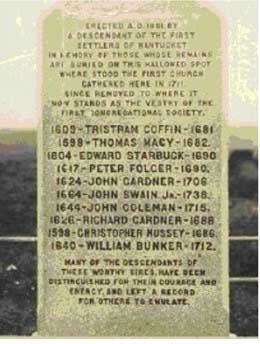 Richard Pinkham of old Dover, NH and his descendants, p.51 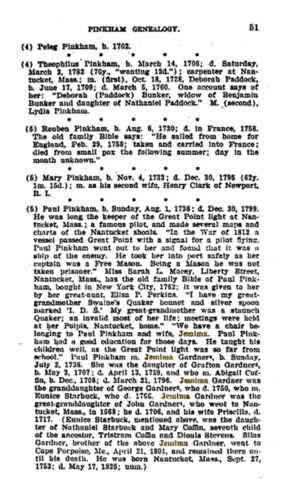 Carole Taylor
hi, was wondering if we could add this bio. by the Pastor, Wm W Newell. (it is on ebooks FREE READ) and the front page is signed by him saying "it is a gift. You have tons of sources so maybe you don't need it. thank you (see Newell-420)

Jillaine Smith
Thanks, Carole. What's the relevance for the profile of Tristram?
posted Sep 13, 2020 by Jillaine Smith

Carole Taylor
His name is in the book because he is the g-g-g grandfather to Eunice Coffin-143 and down the line. Thank you for your response.
posted Sep 13, 2020 by Carole Taylor

T Stanton
Carole, on what page is there info on Tristram? Using search function I only found the reference in page 1.
posted Sep 13, 2020 by T Stanton

Carole Taylor
please see Coffin-143 I looked ho/lo and saw no copyright so acopy of 1 page only is there.
posted Sep 13, 2020 by Carole Taylor

T Stanton
Rework and rewrite complete. Comments welcome. The huge amount of court documents and records have been moved to a linked free space page.
posted Oct 20, 2019 by T Stanton

T Stanton
Jillaine, I see no other takers on the rework offer so putting this on my list and will get too it shortly.
posted Oct 17, 2019 by T Stanton

Jillaine Smith
Tristram has a new profile on NEHGS: https://www.americanancestors.org/databases/early-new-england-families-1641-1700/image?rId=236318480&volumeId=58237 (membership required), which led me back to this profile which is still very long, needs some editing and sub headers, elimination of duplication etc. Hoping a profile manager or member of the Massachusetts project can take it on. Thanks.
posted Oct 16, 2019 by Jillaine Smith

T Stanton
Jillaine, will put this on my rewrite list if you had no other takers.
posted Jun 15, 2019 by T Stanton

Paula (Hawkins) Reinke
Hi Profile Managers, Please note there are Suggestions that needs your attention! Thanks.