John Cogswell was born before his baptism date of 2 April 1592[1] in Westbury Leigh, Wiltshire, England. He was the son of Edward Cogswell and Alice maiden name unknown. It is known that his grandfather, Robert Cogswell (d. 1581), was a manufacturer of woolen cloth.[2]

Baptism: 2 April 1592 in Westbury Leigh, Wiltshire, England (11 is an erroneous reading of the register which says John Cogswell fillies Edward[ard]i Cogeswell baptized: fit ijth Aprilis 1592. ij should be read as 2 and not as 11.)

John married Elizabeth Thompson (1594-1676) daughter of Rev. William Thompson, the Vicar of Westbury Parish, Wiltshire for 20 years (1603-1623) and Phyllis Unknown on 10 September 1615, according to the parish records.[3][4]His parents died soon after John married Elizabeth and he inherited: "The Mylls called Ripond, situate within the Parish of Frome Selwood". [5] His occupation was manufacturing woolen fabric, broadcloths and kerseymeres. He had a very good reputation for a fine product. He is sometimes called a London merchant but that is because he probably had a commission house there, as it would have been the largest market for his product.

Children of the Cogswell-Thompson Marriage

All children except Sarah were born and baptized in Westbury Leigh, Wiltshire, England.

The Public Record Office in London has a conveyance deed for the sale of his Westbury Leigh property in 1635 to Anthony Selfe and Henry Allyn.[6]

John and Elizabeth and 8 of their living children, William, John, Jr., Edward, and 5 daughters (Elizabeth, Mary, Hannah, Esther, Abigail; leaving behind the one daughter, who is now known as Phyllis) sailed on the Angel Gabriel which was commanded by Capt. Andrews. It was the ship built for Sir Walter Raleigh and he probably made his last voyage on her to Guiana, South America in 1618 before he was executed. They boarded the ship on 23 May 1635, sailed on 4 June because it was becalmed. They landed finally on 15 August 1635[7][8] under the worst possible circumstances as a terrible storm wrecked the ship. On the same day, the "James" sailed with more emigrants fleeing religious intolerance. Among those passengers was the Rev. Richard Mather. The passengers on the Angel Gabriel, including John, lost a lot of valuable property and some lost their lives.[9] After they made it ashore at a place called Pemaquid in Maine, John left his family there with the tent he had brought along and went to Boston, Massachusetts. He arranged to have his wife, three sons and five daughters transported on about the last of August to Ipswich, Massachusetts. He was by 1636 granted 300 acres of land at Chebacco, part of Ipswich that was constituted on 5 May 1679, as Chebacco Parish. He also was granted a parcel of 8 acres to build a house and 5 more acres by the river. He built a log house in 1636 and lived in Chebacco for the rest of his life. He is said to have been the third original settler in those parts. He was always addressed as "Mr." which was a mark of distinction in that time.

John was made freeman on 3 March 1636 by an act of the Court, which meant that he could hold public office and vote, amongst other things. As soon as he was able, he built a frame house. Many of their original possessions, which were salvaged from the shipwreck, are still treasured by family members. One of those is an embroidered coat of arms. It was granted to Lord Humphrey Cogswell of England in 1447. On 25 September 1649, he was part of the Essex Grand Jury. As he and his wife grew older, they deeded land to their children, who settled very near and all around them, on farms of their own. On 2 January 1652, they deeded to their son-in-law Cornelius Waldo 49 acres and the dwelling house at Chebacco Falls. On 16 April 1657, they confirmed a grant to sons John and William which was the 300 acres called "Westbury Lee".

He died on November 29, 1669, in Ipswich, Essex, Massachusetts[10], at the age of 77. He died intestate and the administration of his estate was granted to his wife Elizabeth on 29 March 1670.[11] He was honored with a five mile long funeral procession and buried in the Old North Graveyard, also known as Highland, Cowles-Highland, Cowles Memorial, Highland-Cowles, Old Burying Hill, in Ipswich, Massachusetts. His wife is there beside him, but the graves are now unmarked. Find A Grave: Memorial #21536932 created by Cynthia on 13 September 2007. (Some information here in error including the middle name that has been added.) 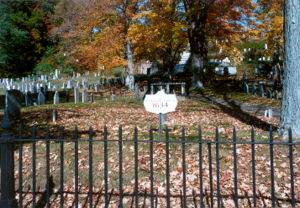 Charlie Richmond
Cogswell-543 and Cogswell-72 appear to represent the same person because: They appear to be the same with the significant difference being birth and death dates.
posted May 06, 2021 by Charlie Richmond

Cheryl (Aldrich) Skordahl
The following was received through the private messaging system but really belongs here, so profile managers can view it, and respond if they wish:

"John, John, Jr., Samuel, Samuel, Hezekiah, Mason, his daughter, Ann Cogswell. Ann is my second or third great-grandmother. Hezekiah moved to an area called Cornwallis Township (near Kentville, Nova Scotia, Canada), in 1760 along with his son, Mason, who was about ten years old at the time. They were part of the New England Planter migration to Nova Scotia. Mason's daughter, Ann, married the Honorable John Elkanah Morton, also of Cornwallis Township, and member of the Legislative Council of Nova Scotia. Mason's son (Ann's brother), Henry Hezekiah Cogswell, was a lawyer and member of the Legislative Council of Nova Scotia, and one of the richest men in Nova Scotia at that time--circa 1850.

Just came across your website and thought it was so interesting that I decided to let you know about one of John Cogswell's descendants.

Congratulations on all your good work.

Please put in Bio that he is the 10th Great Grandfather of Princess Diana. It may be the closest that some people ever get to be a cousin of Royalty and as such this should be a protected Profile and put in a Royalty Project as the Kin of the Princess and future King of England, Prince William. He is my direct 11th Great Grandfather so I want to ensure this profile is protected and treated with the utmost care. Here is another link: http://rjohara.net/gen/notable/diana

Here is a another description: https://en.wikipedia.org/wiki/John_Cogswell

Cogswell Grant is the original Land that was owned and is now set up as a museum in the families name with an additional lovely history of the passage of the land to his sons: https://www.historicnewengland.org/property/cogswells-grant/

posted Feb 06, 2019 by Jack Parker
Jack Parker
It could be noted that "Chebacco" is now called Essex (Essex County, Mass). They petitioned to have their own meeting house and split from Ipswich, the reply was along the lines of "Let no man build a meeting house", so the women built it. In John's time, "Chebacco Parish" was part of Ipswich. There are 41 Cogswells buried in the old Graveyard there. Essex was quite a shipbuilding town in it's day.

And no, I have not found his grave in either Ipswich or Essex.

Dana Burns
I was expecting to see Wikitree-30 on the trusted list.
posted Feb 27, 2018 by Dana Burns

Dana Burns
Shouldn't this (and all Angel Gabriel profiles) be a PGM profile?
posted Feb 27, 2018 by Dana Burns

Correct, and I believe that should also be in his Bio, the fact he is related to Princess Diana. He is NOT a Magna Carta gateway ancestor as he himself doesn't have any known direct Magna Carta Ancestry, however, he is the Grandfather of Princess Diana making anyone related to him a "cousin" to Royalty through Princess Diana's Aristocratic/Royal lineage.

Jillaine Smith
This was never answered, but has come up again. Wikitree identifies a gateway ancestor as an American colonist with Magna Carta *ancestry*. See https://www.wikitree.com/wiki/Category:Gateway_Ancestors
posted Sep 28, 2020 by Jillaine Smith
Joe Cochoit
A connection to a Magna Carta Surety is a narrow definition of a gateway ancestor used by WikiTree. A more general definition is that key individual which open one population group up to a much larger and new population group. For those of us in the US, it is generally that immigrant ancestor which connects to English nobility. In no definition is a gateway ancestor related by a cousin relationship to any specific individual. So no, John Cogswell is not a gateway ancestor, though many will find his connection to the current royal family interesting.
posted Sep 28, 2020 by Joe Cochoit
Kelly (Evans) Yee
Major John Francis Cogswell, Born 2 Apr 1592 in Westbury Leigh, Wiltshire, England
posted Aug 10, 2017 by Kelly (Evans) Yee
Bob Tonsmeire
Coggswell-14 and Cogswell-72 appear to represent the same person because: Similar name, similar details
posted Apr 20, 2016 by Bob Tonsmeire