Henry Asbury Cole was too young to enlist when most men of Black Hawk went off to war. He was able to join Company A, "Neil's Guards" which was raised in Carroll County in 1861. This company was part of the 30th Mississippi Regiment. He joined the regiment on the eve of the Battle of Lookout Mountain, near Chattanooga, TN on Nov 23, 1863.

In this battle, a strong force of 3 Union divisions moved against Lookout Mountain from the West. The mountain was defended by one Confederate division but only General Walthall's Brigade and portion of one more brigade were in position on the western slope of the mountain. The Confederates were over-run and fell back around the north face of the mountain and held on until night-fall.

Out of his original 1500-men, Gen. Walthall's brigade lost 8 killed, 42 wounded, and 845 missing. Company A of the 30th Mississippi lost 1 officer, 1 NCO and 2 slightly wounded with 14 men missing. Pvt Henry Cole was one of those captured and taken to Rock Island Prison in Illinois.

His brother, Robert E. Cole, joined the 22nd Mississippi Regiment and died at camp in Kentucky due to sickness on 1 December 1861--very early in the war. His father, Richard W. Cole, joined the 5th Mississippi Cavalry in the summer of 1863 and was killed at the Battle of Fort Pillow on 12 April 1864.

Henry A. Cole survived the war and returned to Black Hawk, Carroll County, MS. His brother Richard Bascum Cole moved to Texas and his lineage grew. In later life, Henry Cole lived with his daughter. On three occasions he visited the Confederate Veteran's hospital at Beauvoir. After he died, he was buried at Beauvoir, the home of Confederate President Jefferson Davis located in Bilouxi, MS.

My webpage entitled: The Saga of Henry A. Cole and Family is a brief article about the family of Henry Cole and their service during the Civil War. It includes a simple family tree to show the son-in-laws and a connection to the TUCKER family. It contains references to sources. [[1]]

I wrote Beauvoir and they confirmed that Henry Cole visited the hospital 3 times and was buried there. They mistakenly pulled up the records for another Henry Cole.

posted 2 Sep 2011 by Steve Cole
Login to add a memory.
Is Henry your ancestor? Please don't go away!

Images: 2
Headstone of Henry A. Cole 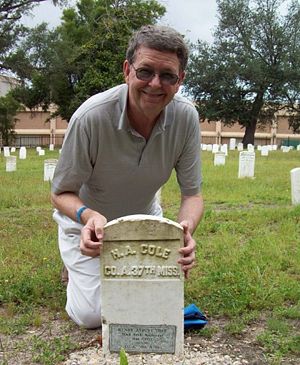 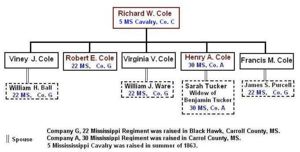 "A couple of years after the war, Henry married the widow Sarah Land Tucker."

Steve Cole
Henry A. Cole survived the war. He returned to Black Hawk, Carroll County, MS to live. His brother Richard Bascum Cole moved to Texas and his lineage grew.

In later life, Henry Cole lived with his daughter. On three occasions he visited the Confederate Veteran's hospital at Beauvoir. After he died, he was buried at Beauvoir, the home of Confederate President Jefferson Davis located in Bilouxi, MS.