Amiral Gaspard II Coligny was a member of the aristocracy in Europe.

Gaspard's father died when he was three years old. He was raised with his brothers by his mother Louise.

In 1530, Louise de Montmorency became lady of honour of Eléonore de Habsbourg, king François I's second wife. Her sons lived at court and Gaspard was close to the king's sons. While his brother Odet chose an ecclesiastical career, Gaspard distinguished himself in military action (1542-1546).

Gaspard de Coligny converted to Protestantism around 1560, after his wife Charlotte and his brother François. He rejected violence against Protestants and condemned the events of Amboise. He joined Condé when the war between Catholics and Protestants broke out (1562).

In 1571, Coligny managed to regain King Charles IX's favor. However, he was hated by the Catholics at court and could only have limited influence.

On 22 August 1572, soon after the marriage of Henri de Navarre and the king's sister Marguerite, Coligny was injured by Charles de Louviers. The king sent his physician, Ambroise Paré, to take care of him and promise justice. But at the same time, the murder of Protestant leaders had been decided, and in the night between 23 and 24 August (Saint Barthélemy), Gaspard de Coligny was murdered in his bed. His body was thrown by the window, mauled, decapitated, and exposed at Montfaucon (the place were hangings were carried out).

The mythical Annietta de Coligny is not one of Gaspard de Coligny's known children and no daughter ‘Annietta’ is mentioned in the Admiral’s own record of his family). She is only known through the book Universal International Genealogy and of the Ancient Fernald Families (1909) by Charles Augustus Fernald, a notoriously fabricated genealogy.

Is Gaspard II your ancestor? Please don't go away!

ask our community of genealogists a question.
Sponsored Search by Ancestry.com
DNA
No known carriers of Gaspard II's DNA have taken a DNA test. 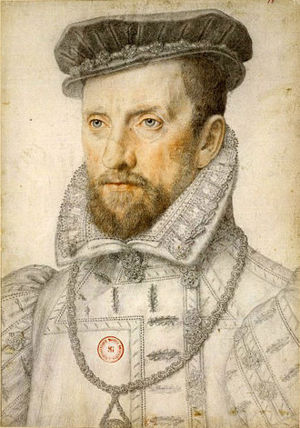 Gaspard II is 21 degrees from Donald Howard, 17 degrees from Julia Howe and 8 degrees from Henry VIII of England on our single family tree. Login to find your connection.

Categories: This Day In History August 24