Ralph Gayland Conkin was born March 8, 1914, in Green Castle, Sullivan county, Missouri, a son of James Jackson Conkin and his wife, Virgie Mae White. Ralph is found on the United States census of 1940, living in Kirksville, Adair county, Missouri, with his parents and his older sister, Thelma Marie Conkin. [1]

Ralph was twenty-six years old when he registered for the draft of soldiers in support of the Americans, in World War II. He was living with his parents at 410 S. Osteopathy, in Kirksville, Missouri. and employed by the Turner Standard Service on 301 North Franklin, in Kirksville. He describes himself as five foot, nine inches tall, weighing 142 pounds, with brown hair and hazel eyes. [2]

Ralph entered into active duty in the U.S. Army, on March 7, 1941, at Jefferson Barracks (near St Louis) Missouri and assigned to the 23rd Infantry Regiment. Ralph was sent to Ardennes on January 1, 1945, during the last major German offensive on the Western Front during World War II, which lasted from December 16, 1944–January 16, 1945, and spent five days there, during what would come to be known as the "Battle of the Buldge." Ralph was awarded the European Ardennes Middle Eastern Ribbon with 3 Bronze Stars, the Good Conduct Medal and a Lapel Pin. Ralph was given an Honorable Discharge on October 13, 1945, and separated at Camp Claiborne, Louisiana. [3]

ask our community of genealogists a question.
Sponsored Search by Ancestry.com
DNA Connections
It may be possible to confirm family relationships with Ralph by comparing test results with other carriers of his ancestors' Y-chromosome or mitochondrial DNA. However, there are no known yDNA or mtDNA test-takers in his direct paternal or maternal line. It is likely that these autosomal DNA test-takers will share DNA with Ralph: 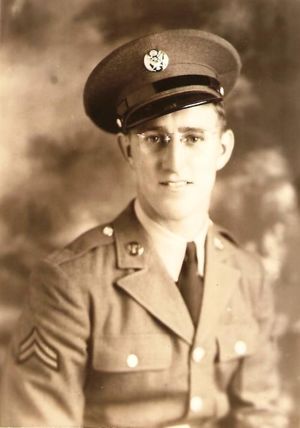 Ralph is 23 degrees from Danielle Liard, 19 degrees from Jack London and 18 degrees from Henry VIII of England on our single family tree. Login to find your connection.

Categories: Battle of the Bulge