Margaret "Margret" Noone formerly Conlon aka Conlan
Born about 1847 in County Mayo, Ireland

[uncertain]
Daughter of Thomas Conlon and [mother unknown]
Sister of Patt Conlon
Wife of Michael Noone — married 2 May 1868 in Kiltimagh, Mayo County, Ireland

Margret was born in County Mayo, Ireland, in about 1847, according to the 1901 Ireland census.[1] Her father was Thomas Conlan.[2]

Margaret Conlan married Michael Noon on 2 May 1868 in the Roman Catholic Chapel at Bohola in Kiltimagh, Mayo, Ireland.[2] [3]

The 1901 Ireland census recorded Michael Noone, age 56 and a farmer, in Toocananagh, with wife Margaret, age 54, son Michael, age 22, daughter Mary, 17, and daughter Ellen, 15. All were born in County Mayo and were Roman Catholic.[1]

Margaret Noone passed away at age 63 on 13 December 1909 at Toocananagh ("Toochananagh" in the record), after suffering from rheumatism for 3 months. Her daughter Ellen Noone was informant for her death registration, having been present at the death. Margaret had had no medical attention.[4] 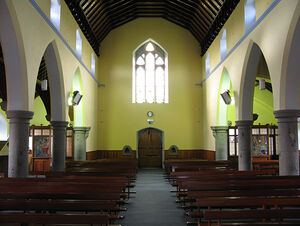