James Connolly was born in Edinburgh on the 15th June 1868, to John Connolly and Mary McGinn, Irish immigrant parents from Monaghan. [1]

Aged 11 years old, he left school to find work, it was a struggle to survive in the Irish labouring community of Edinburgh. James Connolly escaped by joining the British Army. Giving his birth place as Monaghan, he served with his Regiment in Ireland, and is said to have met his wife, Lillie Reynolds at a bus-stop in Dublin during his service there. [2] James Connolly deserted the British Army, when he learned that his Regiment was being deployed to India.

His experience with the British Army in Ireland fuelled his determination to help the Irish people become independent and self-sufficient.

James Connolly was an Irish Republican and a socialist leader whose experience of living in a disadvantaged environment stimulated his interest in Socialism. He became one of the leading Marxist theorists of his day, becoming involved in Scottish and American politics.

He moved to Dublin in 1896 and founded the Irish Socialist Republican Party. He wrote "Socialism and Nationalism" from which the lines "If you remove the English army to-morrow and hoist the green flag over Dublin Castle, unless you set about the organisation of the Socialist Republic your efforts would be in vain. England would still rule you. She would rule you through her capitalists, through her landlords, through her financiers, through the whole array of commercial and individualist institutions she has planted in this country and watered with the tears of our mothers and the blood of our martyrs" were quoted in the film "The Wind that Shakes the Barley" [3]

James Connolly travelled to America, then returned to Ireland to campaign for worker’s rights with James Larkin. He campaigned tirelessly against religious bigotry. His experience in the Dublin Tramworkers' strike and lock-out of 1913 led to the establishment of the Irish Citizen Army. Connolly did associate with the leadership of the Irish Volunteers, considering them too bourgeois, not sufficiently concerned for Ireland's economic independence.

In 1916, thinking the Irish Volunteers and I.R.B. were simply posturing, not prepared to take decisive action against Britain, James Connolly attempted to prompt them into action by saying he would send the Citizen's Army against the British Empire alone. Members of the Irish Republican Brotherhood already involved with the Volunteers saw their own plans for an insurrection would be compromised if Connolly acted independently. I.R.B. leaders, including Tom Clarke and Patrick Pearse, met with James Connolly, hoping to achieve a joint action with the two para-military forces. Connolly agreed, and plans were laid for a rising that year, Easter 1916. He was one of those who signed the proclamation of the Republic of Ireland.

Connolly became Commandant of the joint Dublin Brigade. In effect, commander-in-chief of the Rising in Dublin and led the section that occupied the General Post Office. He proved a formidable leader during the six days of fighting, Michael Collins is remembered to have said that he "would have followed him through hell."

Reassuring his men following the surrender of the G.P.O. James Connolly told them not to worry "those of us that signed the proclamation will be shot but the rest of you will be set free." His prediction was accurate.

Unable to stand to during his execution because of wounds received in the battle around the G.P.O., James Connolly was executed on 12 May 1916 while tied in a chair. He was the last of the leaders to be executed. 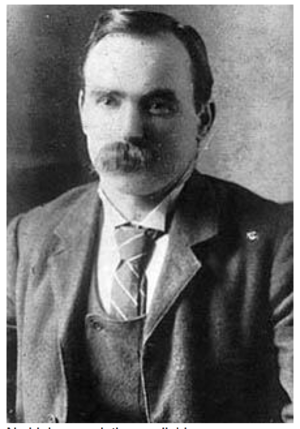