Philip Constable was the son of Sir Marmaduke Constable and Frances Metham born in about 1595.

The family seat was Everingham, although the Constable family also had land and property in several counties but most significantly in Lincolnshire at West Rasen where the family also spent time.

Philip was aged 17 when the Visitation of Yorkshire by Richard St. George, Norry King of Arms took place in 1612. His father was 38 years old.[1]

He married Anne Roper, daughter of Sir William Roper. Whilst the location of marriage is not known, there was a marriage settlement in place prior to the marriage dated 20 April 1616, Anne's marriage portion was worth £4,000.[2]

Philip's grandfather Sir Philip Constable of Everingham died in 1619. His will originally written in July 1617 the probate was granted 17 October 1619.[9]

Philip is not named in the will although his brothers Robert and Michael are. We can only assume this is because of Philip's marriage settlement devised by his grandfather and father.

The family were devout Catholics.

Three of Philip and Anne's children, Barbara, Philip and Thomas were ordained in the Order of St Benedict at Louvain.[10]

Whilst in England it was still the law for all persons to attend Anglican services once a week or be fined 12 pence (equal to about three days wages), introduced by Queen Elizabeth under the Acts of Uniformity.[11]

However, failure by Philip and the family to attend services and as the family were punished accordingly. Philip was convicted as a recusant because of his non attendance at Church of England services, Sir Philip was fined £250 a year, which he paid in half yearly installments.

"...Item I give to my sonne Constable and his wief and three servants five blackes".

Sir Marmaduke's estate given it was on Crown lands was also subject to an Inquisition Post Mortem IPM) dated 22 October 1632. The list of land and property was extensive, located in York and in Lincolnshire.[14]

Also of note is that Philip was stated as son and heir and his age given as 37 in that IPM which adds credence to his year of birth being 1595.

However, because of his recusancy, Sir Philip was restricted in his movements and could not travel more than 5 miles from his home. However, he had remained loyal to King Charles and the King even signed a Licence for Sir Philip on 28 February 1633 allowing him to travel further on specific occaisions.[16]

Philip wrote a draft will in 1636-37. Amoung the bequests, he asked to be buried in either West Rasen or Everingham, four of his children are named, only Anne is not named as she died young. In fact the Visititation of Yorkshire in 1612 confirms that latter fact.

Philip Constable esquire was created a Baronet by King Charles I in 1642. He gained the title of 1st Baronet Constable, of Everingham in 20 July 1642.

His coat of arms and a detailed resume of his lineage are presented in an 18th century publication detailing the Baronets created during the King's reign.[17]

As a Royalist Sir Philip suffered greatly at the hands of the Parliamentarians during the Interregnum and his estates were re-sequestered in November 1652 for papist delinquency.

His son Marmaduke's father in law, Richard Sherburne, intervened for the Constables through two different avenues. He provided financial assistance by giving large sums of money to the family to maintain the estates, and Marmaduke Constable secured a deed bond for himself and his heirs to pay his father-in-law. Sherburne also provided funds for Rushworth to purchase the Constable estates.

From spring of 1653, Rushworth started to buy up substantial portions of Sir Philip's Constable's estates, which included his main residences Of Everingham, Middle Rasen and West Rasen, Ugleforth, and Drax Abbey, alongside parcels of land, farms, tenements, and appurtenances that the family rented out to tenants.[18]

Although unlike some agents whilst acting serupticiously on behalf of Royalists during the interrugnum, Ruthworth requested the "delinquent" manage their own financial affairs. Sir Philip Constable's property was saddled with a £12,488 debt; £7500 to pay the Treason Trustees, and the rest to settle the baronet's own personal liabilities. Some of the debts were transferred into life or personal annuities, and gradually the residual mortgage was reduced. But even in 1671, the charges on the estate stood at £6230, carrying £375 interest.[19]

This action protected the estate for Sir Philip's children, in trust, and the debt was eventually repaid over a 20 year period.

However, Parliament grew suspicious and in about 1655 the Lincolnshire commissioners suspected that John Rushworth’s estate purchases of the Constable estates were fraudulent, as they believed that Sir Philip Constable still received the rents. Consequently, officials investigated whether fraudulent activities had taken place.

During the inquiry, Rushworth revealed that he was persuaded to make the purchases at the behest of Richard Sherburne and from Constable’s distant relation, the regicide Sir William Constable, who were concerned that the Constable estates would be permanently lost to other buyers. Eventually, the charges were dropped, and Rushworth’s agreement with Constable and other landowners continued until the Restoration.[20]

Sir Philip spent his later years living with his daughter Katherine and son in law Edward Sheldon in Steeple Barton, Oxfordshire and most likely this is where he died on 25 February 1664.

He was buried in Steeple Barton church in the central aisle.[21]

The inscription on the stone reads.

Here lyeth Sr. Philip Constable
of Everingham in the County of
Yorke Barronet: whose whole
Estate was confiscated by the
Usurpers for his Loyalty to
King Charles the first.
He died Feb: the 25 A D 1664[22]

A copy of the will of Sir Philp Constable was made 20 February 1665, in that will he made the following bequests. 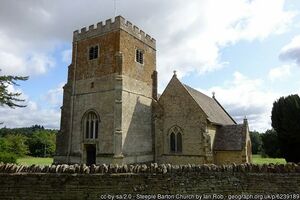