Constantine I and Fausta

The eldest son of Constantine the Great and Fausta, after the death of his half-brother Crispus, Constantine II was born in Arles in February 316[2] and raised as a Christian. On 1 March 317, he was made Caesar. Following the death of his father in 337, Constantine II initially became emperor jointly with his brothers Constantius II and Constans, with the Empire divided between them and their cousins, the Caesars Dalmatius and Hannibalianus.

In 340 Constantine marched into Italy at the head of his troops.[10] Constans, at that time in Dacia, detached and sent a select and disciplined body of his Illyrian troops, stating that he would follow them in person with the remainder of his forces.[8] Constantine was engaged in military operations[6] and was killed in an ambush outside Aquileia.[10] Constans took control of his deceased brother's realm.

Constantius II reigned from ca 337 - 351 to ca 361.
Constantius II was the second son of Constantine the Great. On his father's death, Constantius was given the eastern provinces of the Roman Empire and became involved in a war with Shapur II, Sassanid king of Persia. When his brother, the Western emperor Constans I, was murdered by a usurper, Magnentius, in 350, Constantius led an army into the Balkans,where he defeated Magnentius at the Battle of Mursa (modern Osijek,Croatia) and became (351) sole ruler of the empire. After campaigningagainst the Germans and Sarmatians on the Danube River in 357, here turned to the East, where he continued the war against the Sassanids until his death. Constantius favored the Arian form of Christianity, and was an opponent of St. Athanasius, the orthodox bishop of Alexandria.

Is Constantius II your ancestor? Please don't go away!

ask our community of genealogists a question.
Sponsored Search by Ancestry.com
DNA
No known carriers of Constantius II's DNA have taken a DNA test. 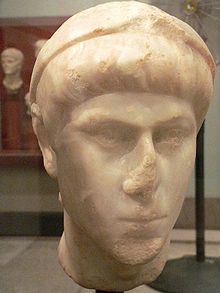 Constantius II is 50 degrees from Jaki Erdoes, 49 degrees from Wallis Windsor and 37 degrees from Henry VIII of England on our single family tree. Login to find your connection.