Provenance
The Champion cup was awarded at the inaugural New Norfolk races in 1850 to Thomas Todd Cooley. It passed through the Cooley family to W E Fuller, the maternal grandfather of the donor R Ian Morse.

He purchased omnibuses in Nov 1855
Commercial Intelligence. 1855 [2]
The sale of omnibusses, horses, &c, by Messrs Worley and Frodsham at New Town on Friday, resulted as follows :-The Ben Bolt omnibus, £245. The City of Hobart, £210. A Hansom's Safety Cab, £21. The horses and harness were sold for £368 and the lease of the premises having nearly five years to run, at a rent of £100 a-year, was purchased by. Mr. Morley for £50; the other articles realized good prices.
We may add that Mr Cooley of New Town [3] was the purchaser of the Omnibusses and horses, and that he intends to run them on the road as heretofore.

Obituary - The Mercury 23 September 1886 [4]
Yesterday there passed away, at the ripe age of 81, Thomas Todd Cooley, who arrived in this colony in 1823, and went as farrier with Col. Arthur through from Hobart Town to Launceston and various other parts of the island, the trip occupying several months. He was at one time in the employ of the late Mr. James Cox, of Clarendon, and afterwards went into business as farrier, etc., in Liverpool-street, Hobart, at a place of business designated the "Leaping Bar," opposite the present General Hospital.
He continued there for some years, until, in 1839, he was induced to start in business as a licensed victualler and farrier at New Town, and a copy of the Hobart Town Advertiser (now in the possession of his representatives) contains a large advertisement of his first starting in business at New Town, which was at that time and for many years after, the only outlet of Hobart. For several years he carried on successfully his two branches of business being patronised largely by the military officers and other residents of Hobart and the surrounding neighbourhood.
He applied himself steadily and carefully to his business, and was also a well-known sportsman in the racing field, in the time of the "Fields," the late Sir Richard Dry, Kearney and many others, and was at one time the owner of the successful, horse Swordsman, afterwards sent to Adelaide.
He was well known in the racing field up to about 1853, and, in fact, for years after wards when all the principal races were held on what is termed the old racecourse.
He then purchased the omnibuses which had been started by a Mr. Johnston on the road between New Town and Hobart, and which, have remained in his hands, and that of his sons, ever since, and are now carried on by his son, Mr. C. M. Cooley, the present well-known proprietor. After living for 47 years in the one establishment, the business of which he carefully studied and brought to a successful issue, Thomas Todd Cooley has died as he lived, an honest and straightforward man, his principle being "do unto others as you would they do unto you." 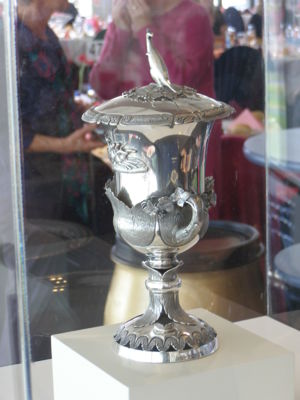