Thomas Corcoran
Born about 1870 in Ireland

The sing sing records for Frederick Bauer no longer exist, the court records may still existin in the Manhatten archives

His death certificate would note him as single.

Attempt to Conceal Murder by Cutting Body into Pieces

New York, Oct, 12 - the finding of a man's head in front of 615 East 18th Street today led to the discovery of a murder which probably occurred last night. The head was first wrapped in a shirt than in a newspaper. A search of the house resulted in the discovery of the arms and legs packed in a suitcase. The trunk of the body was found hidden in a closet.

The murdered man, it develops was Thomas Corcoran, who worked on the elevated railroad. Frederick Bauer, aged 39, elevator man in Union Square hotel in whose room portions of Corcoran's body were found, was arrested.

He said that Corcoran and a soldier came to his room last night and that he fell asleep while they talked. When he awoke, the soldier was gone and he found the body. Bauers' socks and shirt were covered with blood Corcoran had been shot in the face and the body hacked to pieces. The police made the allegation that it was a crime of degeneracy.

Memorial created in what I think is the correct cemetery[3] 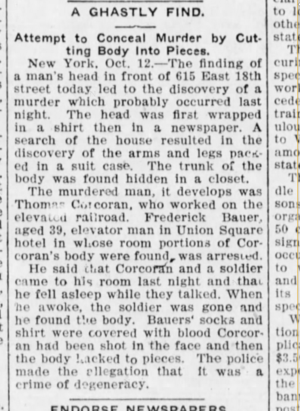 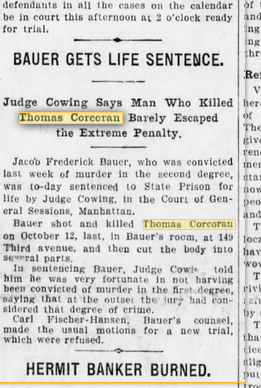 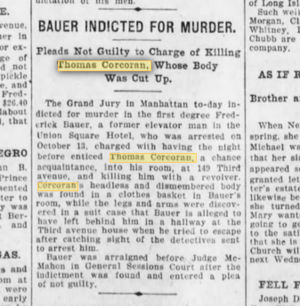