Jacques-Yves Cousteau AC, commonly known in English as Jacques Cousteau; 11 June 1910 – 25 June 1997) was a French naval officer, explorer, conservationist, filmmaker, innovator, scientist, photographer, author and researcher who studied the sea and all forms of life in water. He co-developed the Aqua-lung, pioneered marine conservation and was a member of the Académie française.

The Cousteau family’s underwater investigation and exploration led to the invention of the aqua-lung. It also led to the purchase of the minesweeper Calypso 19 July 1950. Thomas Guinness bought the ship and leased it to Cousteau for a dollar per year.

Simone Cousteau sold her family jewels for the fuel and her fur to buy a compass and gyroscope. On its maiden voyage she was the only woman aboard.

Cousteau was born to Daniel Cousteau and Élisabeth Duranthon on 11 June 1910, in the house of his maternal grandfather Ronan Duranthon in Saint-André-de-Cubzac, Gironde, France[1][2]. He had one brother, Pierre-Antoine. He married Simone Melchior on 10 July 1937 in the 17th arrondissement of Paris[2]. The religious ceremony was performed at Saint-Louis des Invalides[3]. Jacques-Yves Cousteau died of a heart attack on 25 June 1997 in Paris, aged 87. He was buried in a Roman Catholic Christian funeral, in the family vault at Saint-André-de-Cubzac in France.

Is Jacques-Yves your ancestor? Please don't go away!

ask our community of genealogists a question.
Sponsored Search by Ancestry.com
DNA
No known carriers of Jacques-Yves's DNA have taken a DNA test. 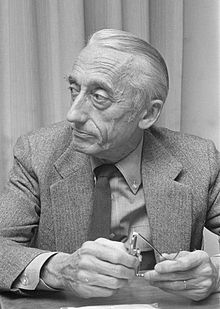