He first marriage was to Lucinda Bentley on 27 Dec 1835 in Blount, Alabama. The following children are listed in the family bible: Asberry Garrison, Columbus N., William Marion, Sidney Riggs, Ira McMillian, Mary Frances, John Watson, Louis Ibzan, Miriam Elvira (Vi), Sarah Adeline, Eliza Jane, Lucinda Caroline, Texas Ann, Upton Asa Wright and Salina. In addition they also supposedly had the following children, Henry Asberry (or Asbury) and Melissa, but cannot find any valid source for these two. Henry is listed in other sources as having been born 3 May 1855. There is one listing in the family bible where the name is NOT readable (at least on my copy) but the birthdate is listed as 30 May 1855. Melissa is listed in other sources as having been born 27 Sep 1856. I had found no listing in the family bible for her (although my scans are not very good). Neither Henry or Melissa are listed with the rest of their family in the 1860 Census, taken on 7 Jun 1860.

His third marriage was to Amanda Melvina Kelly Beavers about 1870 in Upshur, Texas. Amanda was the widow of John Allen Beavers and they had 6 children together. Amanda and T. L. had 2 children. Nancy Shell Lee “Nannie” (born in Oct 1871, died in Sep 1909) and Mattie Elvira (supposedly born about 1873 and supposedly died about 1879). I have found no valid source documentation for Mattie.

His fourth marriage was to Mrs. Martha Nancy Ann (Jones) Humphries on 24 Mar 1880 in Upshur, Texas. Martha had first married (John?) Hodge around 1840. They had 3 children. 2nd marriage was to Charles H. Humphries about 1848 and they had 6 children.

According to the Upshur County War Between the States Burials listing, he died in 1898 Shady Grove, Texas and is buried in Shady Grove Cemetery. NOTE: His Find A Grave listing has his date of death as 1905. But there is no photo of the tombstone or any other evidence that he died in 1905. I have not found any evidence of him listed in the 1900 Census.

Is Taliferro your ancestor? Please don't go away!

ask our community of genealogists a question.
Sponsored Search by Ancestry.com
DNA
No known carriers of Taliferro's DNA have taken a DNA test. 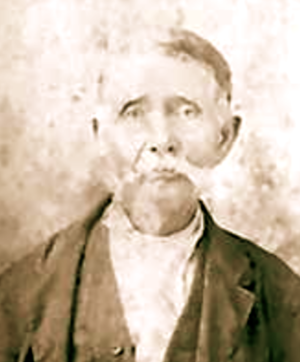 Robert Bentley
I initiated a merge of my Asberry and your Asberry (Cox-31883). Please review the merge request and confirm if you approve.