Moses Cox Sr. aka Coxe
Born about 1594 in England

Moses Cox (or Coxe) arrived in Hampton in 1639 according to Anderson.[1]

His birth date is uncertain, but is placed about 1595 in various family trees. Presumably he was born in England.

The following is from Dow:

Moses was in Hampton in 1639, unmarried, having moved from Ipswich. Margaret, wife of John Stubbin of Watertown testified 19 July 1640 to purchasing from him: "dried suet about the month of October last was twelve month, when he was going from Ipswich to live at Hampton first."[5] In the spring of 1640 Moses was appointed the first herdsman for the town.[6]

On 20 Oct. 1657 Alice, their son John and six other people drowned going in a boat from Hampton:

“The 20th of the 8 mo 1657 The sad hand of God upon eight psons goeing in a vessel by sea from Hampton to Boston, who ware all swallowed up in the ocian soon after they ware out of the Harbour the psons wear by name as ffolloweth- Robert Read, Sargent: Will Swaine, Manewell: Hilyard, John: Philbrick & Ann Philbrick His wife, Sara: Philbrick their daught, Alice the wife of moses Cocks: and John Cocks their sonn: who ware all Drowned the 20th of the 8 mo: 1657.”[7]

"A boat sailed down through the winding ways
Of Hampton River to that low shore,
Full of goodly company
Sailing out on the summer sea,
Veering to catch the land breeze light,
With the Boar to the left and the Rocks to right…

The skipper hauled at the heavy sail;
“God be our help!” he only cried,
As the roaring gale, like the stroke of a flail,
Smote the boat on its starboard side…

But far and wide as eye could reach,
No life was seen upon wave or beach;
The boat that went out at morning never
Sailed back again into Hampton River…

The wind of the sea is a waft of death,
The waves are singing a song of woe!
By silent river, by moaning sea,
Long and vain shall thy watching be:
Never again shall the sweet voice call,
Never the white hand rise and fall!

O Rivermouth Rocks, how sad a sight
Ye saw in the light of breaking day!
Dead faces looking up cold and white
From sand and sea-weed where they lay…

Solemn it was that old day
In Hampton town and its log-built church,
Where side by side the coffins lay
And the mourners stood in aisle and porch.
In the singing-seats young eyes were dim,
The voices faltered that raised the hymn,
And Father Dalton, grave and stern,
Sobbed through his prayer and wept in turn…

As, two by two, with their faces hid,
The mourners walked to the burying ground…

“Lord, forgive us! We’re sinners all!
And the voice of the old man answered her:
“Amen” said Father Bachiler…" [8]

Moses married the widow of one of the victims, Prudence Swain.[9]

On 30 Dec. 1672 “Moses Cox of Hampton... for a valuable sum of money and other considerations, sells to Francis Jenness, of Hampton, and his son, Thomas Jenness, all his right, title and interest in a tract of land to be hereafter laid out (about 50 acres), it being the right of two shares in the cow common in a late division of land called ye North Division, abutting upon Portsmo bounds towards the north & extending southward towards Hampton Meetg hous- the 63 lot in number, bounded on the East by a grant to Edward Gove and on the West by a grant to Abraham Perkins.”[11]

Ittem I give and bequeath unto prudence my welbeloved wife if she doe outlive me the one half of all my land medow & marsh & Comonages and the use of the moveables (Excepting what shall be here after disposed of in this my last will) All during the Tearme of hir Naturall Life And after hir decease then to Returne unto my son in law Jeames Perkins & my Daughter Leah his now wife. 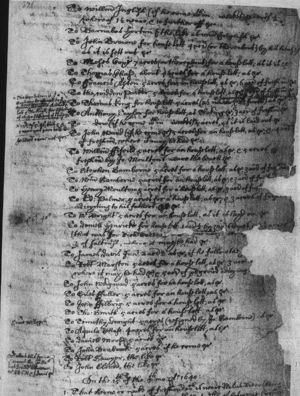