William was born in Glasgow, Scotland. The below gives a brief summary of his life.

After the assassination of President William McKinley in September 1901, the U.S. Congress suggested more continuous protection was essential for US Presidents. By 1902, two permanent agents were assigned full-time to President Theodore Roosevelt.

One of those agents was William I. Craig, who had been with the Secret Service since September 1900 in the Chicago branch and joined the White House detail in October 1901. Originally from Glasgow, Scotland, he served for 12 years in the British military cavalry winning many awards for his bravery. Craig immigrated in 1889 to the United States. He settled in the Chicago area where his brother, Adam Craig, lived. His mother, another brother and a sister came over within the next couple of years. He was a very athletic individual, impressive in size and could handle himself in any situation.

Theodore Roosevelt initially was reluctant having these men follow him everywhere. However, he came to appreciate the professional approach these agents took to watching out for him. Roosevelt even referred to Agent Craig as “his shadow".

The first major situation confirming the worth of these Secret Service agents came on an itinerant speaking tour President Roosevelt had on 2 September 1902 in Pittsfield, Massachusetts. That day, during mid-morning, the President and his guests were traveling in four open carriages pulled by white horses from Pittsfield to Lennox, Massachusetts.

As the President’s carriage driver, Dave J. Platt, approached Pittsfield Street Railroad tracks crossing at South Street, a trolley car (electric car) was coming at an extremely high rate of speed toward the carriages, possibly hoping to pass the Presidential carriage procession. Agent Craig spotted the trolley first and signaled the motorman of the trolley car to stop but he did not. They were both coming down a hill towards the crossing. The President’s carriage was hit directly on its left rear wheel and through to the front wheel, right where Agent Craig and Platt sat. Craig stood up at the instant of the impact to protect the President. The carriage flew 40 feet throwing the occupancies out. Craig was thrown under the trolley, killing him. His skull was split open and his torso crushed.

Roosevelt commented on the loss of Agent Craig, “I was fond of him. He was faithful and ready, and I regret his death more than I can say.” He was affectionately called “Big Bill”. William Craig’s brother, Hugh Craig, brought the body back to Chicago with buried at Oak Woods Cemetery on 7 September 1902.

Fast forward one hundred years to 3 September 2002, where a special centennial memorial ceremony was held at Oak Woods Cemetery to commemorate the first Special Service agent to died in the line of duty. His grave site had long been forgotten, covered in bushes but now was fixed up along with a new plaque in Craig‘s honor. Officials unveiled a granite ledger commemorating Agent Craig for his "heroic actions" that "will never be forgotten," according to the inscription. 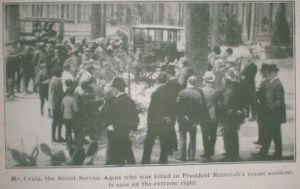 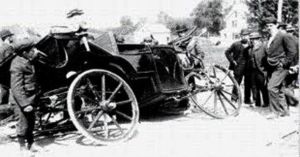