Husband of Hannah (Gaylord) Cottrell — married about 1671 (to after 1676) in Windsor, Hartford, Connecticut

Two early works on John Crandal and his descendants are rife with misinformation.[1] The 1888 work by A.P. Crandall, Genealogy of Elder John Crandall and his Descendants, contains an introductory section (among others) which is now proved to be unfounded, and the second is the 1949 work by John Cortland Crandall, Elder John Crandall of Rhode Island and His Descendants, which seems largely to have been based on the mistakes of the first.[1] These works make many statements without citing sources, and when later researchers sought documentation, they found either no evidence, or suggestion that our John Crandall was confused with a John Cranwell/Craniwell of Boston[1] (see Cranwell's profile in Anderson's Great Migration Begins. Vol 1 (A-F) pages 492-493).

One of the fictitious claims is that John arrived in Boston in 1634/5. Actually, there is no evidence of his presence in British America prior to 8 September 1643, when he was a member of the Newport, Rhode Island Grand Jury. Many researchers have searched for any evidence of his presence in Boston or Salem and have found none.[1] John Cortland Crandall contends that John was in Providence by 1637 and explains the lack of records with, "Many of the early Providence records were early destroyed." According to researcher, Jerry Huggins, "This is just simply not true - the early Providence records are very complete."[1] Another unsupported claim is that John went to England in 1663 with a group of men to to obtain the Rhode Island Charter.

John was probably born in 1618 at the parish of Westerleigh, Gloucestershire, England and was baptized there on 15 February 1617/8.[2] There is good circumstantial evidence that John was the son of James Crandall and his first wife, Eleanor (Unknown) Crandall.[2] John had a half-sister named Anne, daughter of James and his second wife, Joan, who was baptized 30 December 1621.[2]

By 1603, the Crundall family, which included generations of priests, had been displaced from their home, the Winterbourne church, by a powerful parishioner, Robert Bradston.[2] As a result, not all the children's births were recorded in the usual manner and some of the family's relationships had to be deduced indirectly.[2]

There is some Welsh connection in the family's past, although it seems John was born in England. Family tradition, as evidenced by the book by A.P. Crandall, contends that the family had Welsh origins.[2]

John married, as his first wife, to (Unknown) Crandall, who died 2 August 1670 (NOTE: his first wife is NOT Mary Opp, as stated by John Cortland Crandall).[2]

John married, as his second wife, to Hannah Gaylord, daughter of William and Anna (Porter) Gaylord of Windsor, Connecticut.[2] She married, as her second husband, to John Cottrell of Westerly.[2]

Children of John and Hannah Gaylord:[2]

Immigration and Life in Newport

The date and place of John's arrival in New England and the ship on which he sailed are unknown, but he is first found in New England in Newport, Rhode Island in 1643. He is listed in Newport records as a grand juror on 8 September 1643 and is found again named in a case against Thomas Gennings in December 1643.[3]

In a deed dated 29 June 1660, five Newport investors purchased the tract known as Misquamicuck or Misquamicut from Sosoa, an Indian Captain of Narragensett.[2][5] Some of those original investors sold their portions and never settled there. John Crandall, together with six others and two of the original purchasers (William Vaughan and Hugh Mosher), on 27 August 1661, petitioned the Rhode Island General Assembly for permission to settle on the newly purchased Misquamicut[2] (aka Askomicutt).[4]

Gifford, author of The Probable Origins and Ancestry of John Crandall ..., called John Crandall "one of the settlement's leaders"; in fact, Gifford believes that John may have been influential in the naming of Westerly, because his birth place was probably the parish of Westerleigh, Gloucestershire, England.[2]

On 21 May 1669, the Governor and Council of Rhode Island appointed six men as Conservators of the Peace for the Colony. The men were assigned to geographic areas in pairs, the first of the pair to also act as coroner for their area. John Crandal and Tobias Saunders were appointed as justices at Misquamicut, with John likely acting as cornoner.[7] John is also listed as a deputy representative of Westerly in the General Assembly in both 1670 and 1671.[5][6]

From the time Rhode Island was founded, disputes over jurisdictions arose and contunued with Massachusetts and, particularly with Connecticut. These disputes sometimes resulted a property seizures, arrests and imprisonments. John Crandall was the subject of a complaint dated 30 October 1667, in which he was accused of "intrusions" into Stonington, Connecticut, for laying out a square mile of land for his son within the town limits.[1] A copy of a letter to the Governor, dated 11 Mar 1669, from John Crandall and Tobias Sanders regarding such a dispute, can be seen in John Cortland Crandall's 1949 book.[8] John was sent to present a letter dated 15 Oct 1670 from the General Assembly to the Connecticut court.[7] In 1671, John Crandall was arrested and imprisoned at the Hartford, Connecticut jail[5] and tried in New Haven on 2 May 1671.[1] The Rhode Island General Court addressed this matter on 3 May 1671, advising that John should not to post bond and stating that the colony would bear John's charges.[7]

It is thought that John temporarily removed to Newport in 1676 as Westerly had become too dangerous during King Philips War.[citation needed]

John was a Baptist and then later, a Seventh Day Baptist. It is unknown whether he was a baptist in England or if he converted in Rhode Island. Gifford contends there was baptist activity in Bristol, England in the 1630's, and that Seventh-Day Baptists were in Gloucestershire by 1620.[2] John Crandall was to become the first Elder of the Baptist Society of Westerly.[2]

In July 1651, John, with Rev. John Clarke and Obadiah Holmes, were arrested for preaching in Lynn, Massachusetts and jailed in Boston until their trail, the following week. At the trail they were charged with being anabaptists and fined, Clark £20, Holmes £30 and John £5 and were "to be well whipped" if they did not pay their fines. They refused to pay the fines and were imprisoned. Rev. Clarke and John were later sent home on bail, but Holmes was severely whipped.[9]

John Crandall was persecuted for his religious beliefs. John was called "Grendall of Narragansett" after participating in a 14 April 1668 religious debate in Boston.[1]

Possibly injured in Great Swamp Fight of 19 Dec 1675 at Westerly.

John died in 1676 at Newport, Rhode Island,[2] as evidenced in a letter from Samuel Hubbard dated Nov 1676.[10] John is buried in a famly cemetery located west of the Crandall homestead. He is buried with both of his wives, his son John Jr. and his wife,[5] in Rhode Island Historical Cemetery #15, where a monument to the family was erected in 1994.[11]

No will has been found for Elder John Crandall but, in a document dated 3 Oct 1670, he signed over all his goods, chattels, debts., etc. to his son, John Crandall Jr.[1]

In a document dated 13 May 1678, John Crandall's house and 200 acres of land in Westerly were turned over by John Crandall Jr. to his brothers Jeremiah and Hebe of Newport who were "in the tuition of their mother Hannah Crandall".[1]

In The Early History of Narragansett ..., among the listing of Indian and Other Names of Places: "Quequatnck or Qneqiiathanic or Queqvatage - About twenty miles up Pawcatuc river, near where Crandal's mill stood on said river in 1681." This property was named in a 1699 lawsuit.[7] 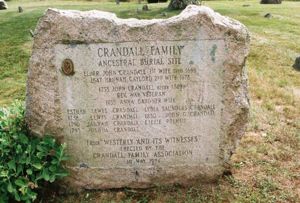 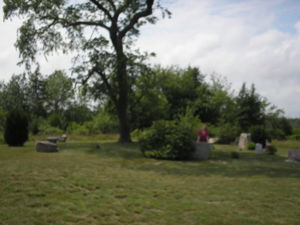 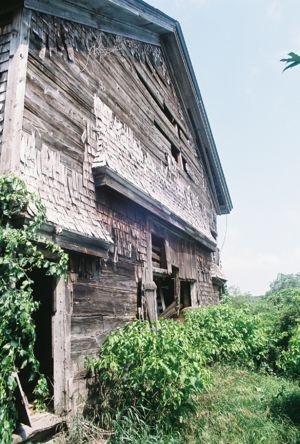 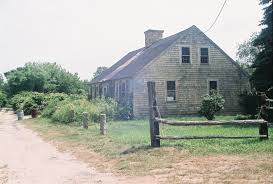 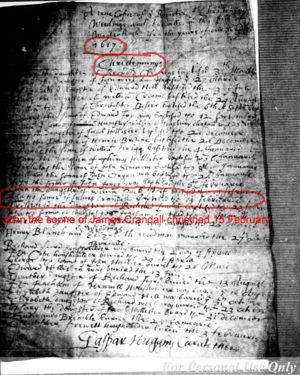 S (Hill) Willson
Please see the first section of his wife's profile for further information about this, and why it is refuted: Mary (UNKNOWN) Crandall (1625-bef.1670)
posted Apr 25, 2022 by S (Hill) Willson
Laurie Fenrick
Elder John Crandall is my 8th Great Grandfather, Quick question for anyone who can answer it, How do we know that Mary Opp was not Elder John Crandall's first wife? I found another reference to Mary Opp being his first wife in the book "Davis-The Settlers of Salem, West Virginia by Susie Davis Nicholson. She states that per the notes of one Mildred Small that Mary Opp was his first wife. I found this reference also detailed on RootWeb that "Mildred Small of Etna, PA states that she found in the records in Washington, D.C. that the first wife of Elder John was Mary Opp who died 20 Aug. 1669." Any help is appreciated.  :)
posted Jun 10, 2021 by Laurie Fenrick

The most recent published info (Dec 2006) on Elder John Crandall says "John's first wife died 2 Aug. 1670. Her name is unknown; the name "Mary Opp", given by John Cortland Crandall is a name without any basis known to this author."

His first wife's name could have been Mary Opp, but nobody had found proof to verify her name either way. Her name might not even be Mary. We know she was buried 2 Aug 1670 (not 20 Aug 1669), but that's about it. See the Disputed Name section at the top of "Mary's" profile.

Jillaine Smith
That would be great, T. Thank you. And if a current profile manager would like to take it on, that would also be great.
posted Sep 25, 2019 by Jillaine Smith

T Stanton
Jillaine, he is an 8th ggf and Rhode Island so if no PMs take on the overhaul, I would be happy to add it to my list. It also appears this profile still contains information from the largely discredited work of A. P. Crandall.
posted Sep 25, 2019 by T Stanton

Jillaine Smith
This profile looks like it has not had a complete post merge overhaul. There is a lot of duplicative text and several copy-pastes. Would a profile manager like to take on making a single narrative?
posted Sep 25, 2019 by Jillaine Smith

Jillaine Smith
Donna, we don't accept FindAGrave as a reliable source. In this case, it's probably based on the 1949 Crandall history which offered no source for "Mary Opp". A later published researcher could find no evidence for her name.
posted Sep 25, 2019 by Jillaine Smith

Anne B
Find a Grave is not a genealogy website. It is to record burials. The persons who add genealogy unfortunately are frequently incorrect. The biography here says that she was not Mary Opp.
posted Sep 25, 2019 by Anne B
Donna (Rouse) Michelstetter
Find A Grave 5757231 provides the maiden name of Mary Crandall (Opp). Her memorial is 38014397. This also contains an image of the history of John C. Crandall
posted Sep 25, 2019 by Donna (Rouse) Michelstetter

Jillaine Smith
This profile has an over-abundance of profile managers; unless you're actively researching this profile, please consider downgrading yourself to the Trusted List. You'll still receive notice of edits through your family activity feed. Thank you.
posted Oct 13, 2018 by Jillaine Smith

I did add it to her.