He married Mary Duke and lived in Hanover, Virginia. He died before his father (who died in 1762).[2] He had four sons and two daughters, one of whom was named William and married an Elizabeth. [3]

John Crawford, formerly of Hanover County (VA), entered the Carolina colonies in an area which would later become Anson and Richmond County (NC) as an occasional attorney and surveyor around 1737.

Note that this will only names three children.

Text: In November 1730: Elisha Gatchell requests the grant of a parcel of land on behalf of James Crawford who has settled on the barrens of Nottingham on a branch of the Elk river and John Crawford likewise adjoining to the above".

Shank certifies Wm. Wirt Whitsett appeared as a private on depreciation pay list of Westmoreland Co. Militia in War of the Revolution.

When Margo Wahlberg tried to obtain these same records in about 1988 she was told the records had been destroyed by floods so the only infothey could provide was the DAR certifications.


Memories: 1
Enter a personal reminiscence or story.
Karen Leigh (Johnson) Grady
According to legend, this person should be Alexander Crawford (b. 1605 Scotland m. Mary Crichton brother of John b. 1600) and link this family to the Scottish Crawford clan. I am certain they are linked but I don't see how it could be through this Alexander since the three brothers (James, Hardy, and John I.) weren't born until 1715-1750. Perhaps Alexander is a grandfather or great grandfather.
posted 3 Dec 2012 by Karen Leigh (Johnson) Grady   [thank Karen Leigh]
Login to add a memory.
Is John your ancestor? Please don't go away! 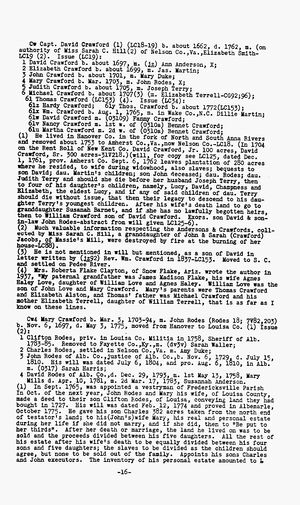 Leave a message for others who see this profile.
There are no comments yet.
Login to post a comment.
Jonathan Crawford
Primary image is just the Adobe Acrobat logo? Perhaps the image changed, but this should probably be removed as the primary photo.
posted Oct 18, 2021 by Jonathan Crawford

Leake Little
it was a wikitree glitch... .pdf restored to view
posted Oct 18, 2021 by Leake Little
Sarah Sharpless
Crawford-16298 and Crawford-449 appear to represent the same person because: Both these John Crawfords have the same death date/place. John Crawford's will only names 3 children - John, Thomas, and Michael, and John's wife Mary. Is there any proof for the other children linked to this John Crawford?
posted Sep 04, 2020 by Sarah Sharpless

Please let me know your concerns or questions. I'd like to move this line forward.