David "Davy" Crockett was born in 1786. son of https://www.tshaonline.org/handbook/entries/crockett-david

Note: The Crockett pedigree, published in Wikipedia and in numerous other venues, that traces his ancestry to a French (Huguenot) family named de Crocketagne, has no documentary basis. See the WikiTree page The alleged French origins of the Crockett family in America.

I leave this rule for others when I'm dead,
Be always sure you're right--THEN GO AHEAD!
David "Davy" Crockett

A 19th century American folk hero, frontiersman, soldier and politician, he's commonly referred to as the, "King of the Wild Frontier". He represented Tennessee in the U.S. House of Reps, and in 1826, was elected to the U.S. Congress, where he opposed the Indian Removal Act. [2]

His autobiographical A Narrative of the Life of David Crockett, of the State of Tennessee was published in Philadelphia in 1834.

Crockett's opposition to Andrew Jackson led to his defeat in the 1834 elections, which prompted his angry departure to Texas Colony of Mexico. He entered Nacogdoches, Texas in 1836 and from there joined the Texas Revolution.[2]

January, 1836 Davy reached Nacogdoches, Texas Colony. Then he joined the Texas Volunteers. Nacogdoches is in East Texas, thus within a month Davy and the Tennessee Volunteers reached the Alamo in San Antonio, Texas. (They would have been traveling on foot or horseback at that time). Crockett then joined the Texans in their fight to hold the Alamo against a Mexican army. [2][5][6]

David Crockett brought with him a group of 12 Tennessee Mounted Volunteers (other adventurers). They joined the garrison in February 8, 1836 prior to the arrival of Santa Anna's army in San Antonio de Bejar to begin the Siege of the Alamo Feb 23, 1836. [7]

When Crockett joined the Alamo, he had asked for the difficult assignment of defending the outside perimeter. He stood by his word. [8][9] In the first week of March he and the other defenders of the Alamo died during the siege and capture of that fort by Mexican troops. Colonel David (Davy ) Crockett was killed at the Battle of the Alamo, March 6, 1836 as well as the other Alamo Defenders.. [8][10][11]

Statements of Susannah Dickenson, wife of Almaron Dickinson as well as the diary of a Mexican officer, Lt. José Enrique de la Peña and Joe, a slave reported seeing Davy Crockett near the Alamo building, and then lying dead with some slain Mexican army lying nearby.

I recd your polite favor 13 Jany and purused it. Old Hickery is like a daimond in the hill of no value until its rubed and polished. So with Gen Jackson the harder they rub him the Brighter he shines.

I have the subject of [our] vacant land under train and litle doubt of obtaining a relinquishment. I wish you to write me often.

Lenthy tender my best regards to all friends excuse my scrall i am in great hast.

Sponsored Search by Ancestry.com
DNA Connections
It may be possible to confirm family relationships with David by comparing test results with other carriers of his Y-chromosome or his mother's mitochondrial DNA. However, there are no known yDNA or mtDNA test-takers in his direct paternal or maternal line. It is likely that these autosomal DNA test-takers will share some percentage of DNA with David: 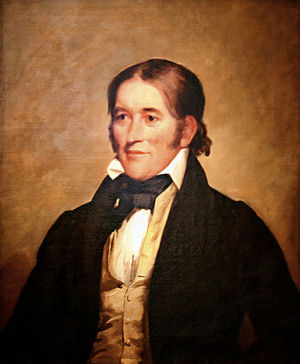 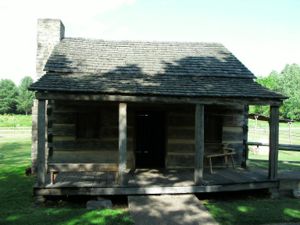 The Fall of the Alamo 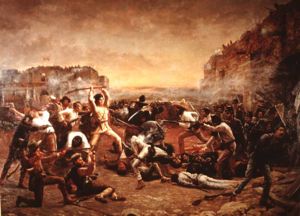 Richard Hawkins
David Crockett's mother was Rebecca Sullivan Hawkins, and that means David is my 1st cousin 1x removed of husband of 7th cousin 5x removed.
posted Oct 13, 2020 by Richard Hawkins
Kevin McDanel
Crockett-1122 and Crockett-311 appear to represent the same person because: i am not a direct ancestor but i can get to hem in my tree working on a one world tree thanks
posted Nov 10, 2014 by Kevin McDanel
Amanda Pitts
Are the profile managers active on this page? There is a pending merge that I proposed, but I would like a profile manager to take a look at it. Thanks!
posted Mar 08, 2014 by Amanda Pitts