Thomas Cromwell was born about 1484-5[1] in Putney, Surrey. While Putney today is a suburb of London, in the fifteenth century it was a small village six miles upstream from the king's palace at Whitehall and the archbishop's palace at Lambeth. He was the son of Walter Cromwell, a blacksmith, fuller and brewer in the village who held a number of copyholds from the Manor of Wimbledon, whose lord was the archbishop.

The manorial rolls for Wimbledon, which are full of mentions of Thomas' father have not one mention of him. As a child this would not be surprising but there are none after he came of age either. He gave a number of accounts to contemporaries as to what he did between 1502 and 1512 and as he was a man of incredible importance for ten years, several ambassadors described his background.

He fell out with his violent father and headed to the continent. Here he signed up as a mercenary and was part of the French army that was routed at the Battle of Garigliano[2]. He ended up in Florence and was taken in by the Frescobaldi family, becoming one of their agents in the Low Countries. By 1512 he was trading cloth in his own right[2].

In 1512 he was recorded as being in both the Netherlands (Middelburg) and in England and was working as both a merchant and a solicitor. In June 1514 Thomas was in Rome[3] acting as an agent for the Archbishop of York, handling ecclesiastical matters.

In those years he married Elizabeth Wykes the widow of Thomas Williams, a Yeoman of the Guard, and the daughter of a Putney shearman, Henry Wykes, who had served as a Gentleman Usher to King Henry VII. They went on to have three children together: Gregory, Anne and Grace, all before 1520.

In 1517-18 Thomas was back in Rome seeking to secure indulgences for the guild of Our Lady in Boston[3], a task he accomplished most efficiently. This work brought him to the attention of Cardinal Wolsey, Archbishop of York and King Henry VIII's Lord Chancellor who as Papal Legate was working on the Treaty of London. By 1519, Cromwell was performing work for the cardinal and over the next ten years rose steadily to become his right hand. Interestingly, at one point Wolsey tasked him with the dissolution of a number of priories to raise the funds to build Cardinal College.

He was still working as a merchant as well as a lawyer and in 1523 became an MP for one session of Parliament, an experience he found futile[4]. In 1524 he was elected a member of Gray's Inn[5]. By the mid-1520s a combination of his marriage, his cloth trading and his legal work meant he was exceptionally wealthy[3]. Unlike his contemporaries he made no attempt to spend this wealth building a great house. Instead he rented a house within the grounds of the Augustinian Friary of Austin Friars[6].

1529 was Thomas' annus horribilis. An epidemic of sweating sickness swept through London. Thomas wrote his will leaving careful instructions as to how his fortune was to be divided[2]. He survived but his wife, Elizabeth, and both his daughters died within days of each other; he never remarried[2]. At the same time Cardinal Wolsey lost power over his failure to secure Henry a divorce, imperiling Cromwell as well[4].

And yet, within a month of Wolsey's fall, Cromwell had become an Member of Parliament again. The month after that Henry appointed him to the Privy Council[4]. He was clearly a man with a plan. His scheme was that Parliament would give Henry his divorce.

Following the fall of Wolsey, Sir Thomas More had become Chancellor. King Henry's court divided into two shifting factions, Radicals and Conservatives. This fracture would last for thirty years. The conservative group was led by More, Stephen Gardiner, the Bishop of Winchester and the Howard Family. The radical group by Cromwell, Archbishop Cranmer and the Seymour Family.

By May of 1532, Cromwell had driven More to resign and by May of 1533, Henry and Anne Boleyn were married and the union blessed by Cranmer[4]. In April 1534, Henry confirmed Thomas as his principal secretary and chief minister, a position which he had held for some time in all but name.

By 1535, Cromwell had established Henry as head of the church in England and completed the separation from Rome[4]. Cromwell, now appointed Vicegerent and Vicar-General, began to dissolve the monastic houses releasing vast amounts of land and wealth into the court and the English economy. Anne Boleyn took a position against this and it was fatal. The King despised women involved in the politics of the realm; this, her failure to produce a male heir and the King's growing infatuation with Jane Seymour meant her downfall. Cromwell, with typical efficiency, arranged for her arraignment, trial and execution[4].

From 1532 Cromwell had been acquiring land around Austin Friars including the Swanne Inn and the field just west of the Friary wall. He spent £550 on doing this, a simply enormous sum[6]. With the dissolution of the religious establishment he acquired all the non-religious buildings north and south of his original house. He set about building a mansion befitting the King's chief minister. He spent over £1000 from 1535 to 1539 creating a suitable house[6]. It had an imposing frontage on the street with three oriel windows above a large gateway and was set around three courtyards together with large gardens[6].

In 1536, with the King's marriage to Jane Seymour, Cromwell's power reached its zenith. He was created Baron Cromwell of Okeham in the County of Rutland[7]. His son, Gregory, married one of the Seymours, Elizabeth.

Jane's death the following year caused Thomas problems. He was told to arrange another marriage for the King. The resulting betrothal to Anne of Cleves was a disaster. They met on New Year's Day, 1540 and the King was not taken with her ("I like her not!"). While the marriage took place it was not consummated.

Cromwell was made Earl of Essex in April[4] and yet his hold on power was failing. Gardiner and the Howards used Catherine Howard to entice Henry. In June, Thomas was arrested at a Council meeting, condemned to death without trial and beheaded on Tower Hill on 28 July 1540, the day of the King's marriage to Catherine. His head was placed on a spike on London Bridge.

Within a few months Henry was openly lamenting that under pretext of some slight offences which he had committed, they had brought several accusations against him, on the strength of which he had put to death the most faithful servant he ever had[8].

Thomas Cromwell is also alleged to have had an illegitimate daughter, Jane. Jane married William Hough, of Leighton in Wirral, Cheshire, sometime about 1550. 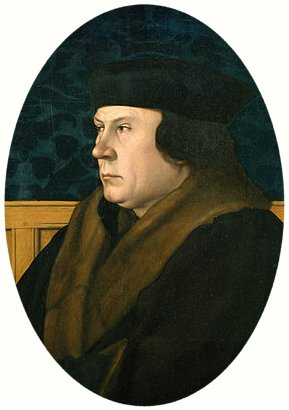 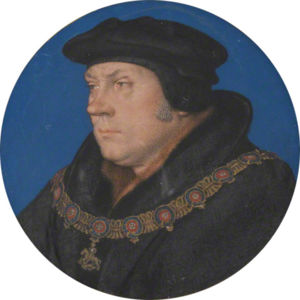 Location of Cromwell's house in 1525. 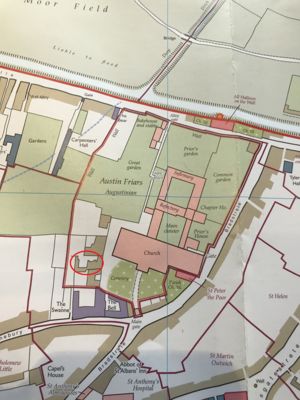 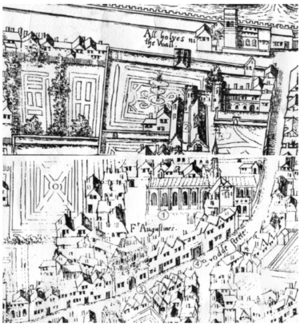 Stephen Trueblood
I have finished writing the biography for the Managed Profile Team of the England Project.

In England the Middle Ages are often said to end with the Battle of Bosworth in 1485. In reality they end with Cromwell's separation of the English church and his destruction of the religious houses. This liberated the immense stored wealth of the centuries since the conquest into the English economy. It directly led to the establishment of a Middle Class, the Elizabethan Golden Age and England taking its place as a world power.

Liz Carson
In the sentence, "He ended up in Florence and was taken in by the Frescobaldi family, becoming on of their agents in the Low Countries.", there is a typographical error that needs correcting.

Gillian Thomas
Hi James, the England Project would like to take on management of this profile due to his historical significance for England. See Project Managed Profiles Help for more information. I will send you a trusted list request to add me to the trusted list for the profile. Please contact me if you would like to discuss. Regards, Gillian, Leader, England Project.
posted Mar 28, 2019 by Gillian Thomas

Billy Huff
If interested, see profile of Richard Hough, servant of Thomas Cromwell and father of William who married his daughter Jane Cromwell.

DK Clews
Please add the following as well for anyone interested;

Actor Danny Dyer is a direct descendant of Thomas Cromwell.