The gap in his life history between the census of 1851 (when he was in Wells, Somerset, UK) and his marriage in 1870 (in Tynemouth, Northumberland, UK) must be explained by a career in the army. (His military records have been applied for by Alan J. White as of August 2019.) When he popped up in Tynemouth he was described as "soldier" (1870 marriage certificate) and "clerk at military store" (1871 census).

He was employed as "aquarium custodian" in 1880 prior to his death.[4] The aquarium must have been the Tynemouth Aquarium and Winter Garden. This impressive structure overlooking Tynemouth Long Sands was opened in 1878 and had a marine aquarium on the second floor. It was subsequently renamed "Tynemouth Palace" and later "Tynemouth Plaza". It finally burned down in 1996, having been dilapidated for many years.

Reuben Crossman died in 1880 of "inflammation of the lungs | cardiac syncope".[4]

The Reuben Crossman who appears in Wells (Somerset, UK) in the 1841 and 1851 census records is the same as the one who appears in Tynemouth (Northumberland, UK) in the 1870 marriage index, the 1871 census and the 1880 death index. The place-of-birth data in the 1871 census record tends to confirm this, as does the tie-in over father's name in baptism and marriage records. The fact that his father is referred to as "Charles Crossman, gamekeeper" in both his marriage certificate and his mother's death certificate is the clincher.

Incidentally, Crossman is/was a rare surname in Northumberland – only three visible on 1871 census.

No record of birth has been found. The records suggest he was born in 1834/5, 1836/7 or 1842/3. The latter, which comes from the 1871 census, appears, on the face of it, to be the most likely to be correct, as he was a living literate adult at the time and thus well placed to give his age correctly. However a “Rubin Cros(s)man", aged 4, is mentioned in the 1841 census, so either this is a different person or Reuben was born well before 1841.

With that in mind, 1837 seems the most likely birth year. He perhaps understated his age on the marriage certificate from 33 to 28 in order not to appear too much older than his bride, aged 19. The age of 45 on the death certificate may have been a guess, rounded to the nearest 5, by relatives who realised he had falsified his age earlier.

This is given as Doulting in the baptism record[1] and Bristol in the 1871 census[2]. They are both in the county of Somerset, UK. (The 1851 census gives Doulton, which is probably the same as Doulting.[3])

It almost looks as if Reuben was obscuring his date and place of birth, perhaps because he ran away from home and joined the army to avoid some trouble or other.

ask our community of genealogists a question.
Sponsored Search by Ancestry.com
DNA
No known carriers of Reuben's DNA have taken a DNA test. 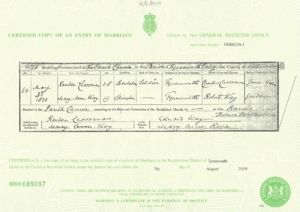 Reuben is 32 degrees from Peter Roberts, 26 degrees from Emma Smith and 27 degrees from Henry VIII of England on our single family tree. Login to find your connection.