James's brother Ralph Cudworth was the leader of the [https://en.wikipedia.org/wiki/Cambridge_Platonists "Cambridge Platonists". Brother Ralph's father-in-law was Matthew Cradock, the first governor of the Massachusetts Bay Company (who never actually went to America).

"The parish register of Northam, Devonshire, contains the record of a marriage between James Cudworth and Mary Parker on 1 February 1633/4. There are many reasons to think that this record applies to the immigrant. First, the timing would be just right. The date would be just ahead of the sailing season for passenger vessels, and would confirm that Cudworth came to New England in 1634, and not in 1632 as some have thought. Second, this marriage occurs fifteen months before the birth of the first known child of this couple, an appropriate interval. Third, Northam is close to Barnstaple, one of the outports from which many West Countrymen departed for New England. Fourth, there is no other record for the surname Cudworth in the Northam parish register."[4]

Late in life, James Cudworth returned to England on a mission to the king, for Plymouth Colony, to obtain a patent giving formal authorization for the colony's government. [2] He is believed to have died in England sometime between September 15, 1681, the date of his will, and the date of inventory, June 20, 1682. The will was proved on July 7, 1682. His death was believed to have been from smallpox and due to practices of the 17th century regarding the burial of smallpox victims, his body may have been disposed of rather than having been formally buried.[5][2]

There is a memorial stone for James Cudworth at the "Men of Kent Cemetery" in Scituate. [6]

"In his will, dated 15 September 1681 and proved 7 July 1682, 'James Cudworth Sr. of Scituate' ordered that his estate was to be 'equally divided amongst my children into six parts or portions, my eldest son James Cudworth, he to have a double share, wiht what he hath already received'; to 'my son Israell' one sixth-part; to 'my son Jonathan' one-sixth part; to 'my daughter Marey's four children Israel Whetcomme, Robert , James and Mary,' one-sixth share equally divided; to 'my daughter Joannah Jones' one-sixth part; 'Israel Whetcome and Robert Whetcome and James' to receive their shares at age 21, and 'Mary Whetcome at the aged afoesaid, or date of marriage'; 'my sons [to] enjoy and possess all my lands, the eldest son James two-thirds, Israell and Jonathan each of them one-third'; 'what the moveables fall short of making good Joannah's portion and the four grandchildrens' portions' to be paid out of the sons' estates; 'my three sons James, Israell and Jonathan' joint executors."

James Cudworth is listed in Magna Carta Ancestry as a Gateway Ancestor (vol. I, pages xxiii-xxix) in a Richardson-documented trail to Magna Carta Surety Barons Hugh le Bigod and Roger le Bigod (vol. II, pages 8-12 CUDWORTH). This trail, set forth in the Magna Carta Trails section of his mother's profile, has not yet been developed on Wikitree.

NOTE: Researchers disagree about the path from James to Magna Carta ancestry, questioning the Magna Carta lineage for James Cudworth through his mother. For details of the debate, see this G2G discussion. A proposed correction for the ancestry of James Cudworth's mother includes descents from several Magna Carta barons:

Ancestry of Mary Machell
The medieval genealogist Douglas Richardson identifies James Cudworth as a "Gateway Ancestor" in his Magna Carta Ancestry, but some researchers believe Richardson errs regarding the mother of Cudworth's mother Mary Machell, breaking the lineage as Richardson presents it. (See Mary Machell's profile for a detailed discussion.)

Mary's mother, in this researcher's opinion, is Ursula Hynde, the daughter of Jane Verney, who does have multiple Magna Carta lineages, as documented in Richardson's books.

Jane Verney is descended on her father's side, through the Iwardby and Missenden families, from Robert FitzWalter the leader of the Magna Carta surety barons, as well as surety barons Henry de Bohun, Hugh le Bigod, his father Roger le Bigod, and Richard de Clare. 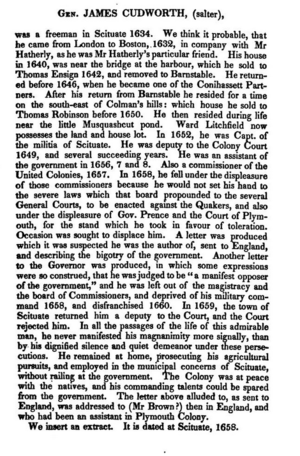 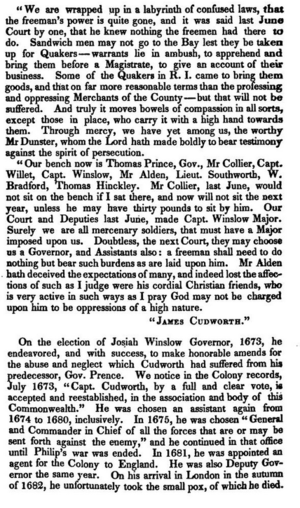 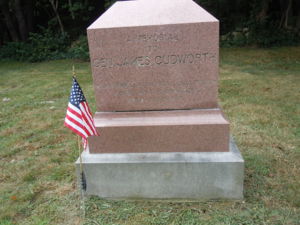 Leave a message for others who see this profile.
There are no comments yet.
Login to post a comment.
Debbie (Wenner) Frost
Hi. I am new to Wikipedia but old to Lineage Societies. I am a member of Magna Charta through James Cudworth. I am slowly getting my lineage here in tact with locations of all documentations. Just wanted you all to know James Cudworth is a Gateway Ancestor. Debbie
posted Oct 07, 2021 by Debbie (Wenner) Frost

Jillaine Smith
Magna Carta project folks, there are two sections on this profile concerning his Magna Carta ancestry. May they please be combined in some way? Thank you.
posted Jun 18, 2018 by Jillaine Smith

David Drabold
A real defect of WikiTree is that some persistent but illogical people, I mean John Schmeekle, misrepresent the ancestry of James Cudworth. He falsely asserts that it is somehow clear that Mary Machell, the mother of James C was d. of John Machell and Ursula Hynde. This is frankly a ridiculous assertion, given a real review of the facts. I would agree that the case is not closed, but certainly leans the other way, to Matthew M and Mary Lewknor. I am sorry to belabor this point, but it is important to resist errors that are promoted and promulgated by irritating persistence when the rest of the world has better things to do. I will say that this experience has considerab;y degraded my opinion of WikiTree.
posted Jun 15, 2018 by David Drabold
Rob Stafford Jr
Much as I enjoy watching a good argument, perhaps you guys could work out your issues in some way that doesn't keep generating notifications to me and the other bystanders.
posted May 04, 2018 by Rob Stafford Jr

Quite right. The page has been edited by a number of people recently. It needs a careful review. I guess I am waiting to see where the chips fall on the current "discussions".

Jillaine Smith
Is there any reason to retain the "memory" that was added here in 2013? It appears that all the data is now incorporated into the narrative and so the "memory" is duplicative and clutters the page. Any objections to its removal ?
posted May 04, 2018 by Jillaine Smith
[Living Schmeeckle]
Jillaine, as you have publicly disavowed any intention of actually analyzing the evidence, it would seem that any opinion you share isn't helpful.
posted May 04, 2018 by [Living Schmeeckle]

Jillaine Smith
Clarification on what Jillaine noted. I noted that there are two theories. I suppose one could by extension interpret this to mean that Jillaine believes John's theory is not airtight. But by further extension, neither is the other theory.
posted May 04, 2018 by Jillaine Smith
[Living Schmeeckle]
James Cudworth married Mary Parker in Devon shortly before emigrating. And then we find William Parker-171 who married in Scituate (where the Cudworths settled) in 1639. Was he James Cudworth's brother-in-law?
posted May 03, 2018 by [Living Schmeeckle]
[Living Schmeeckle]
David, you're welcome to share your thoughts on the G2G thread, and/or on the SGM thread where you have chosen not to respond. Jillaine carefully refused to say anything about the evidence, so I'm not sure why you mention her. Your earlier error-prone post at SGM (which I discussed in detail -- you haven't replied) was made before I found a SECOND Mary Machell, who married a minister in a Sussex parish by the sea, well away from London -- the Lewknors' home parish where Mary (Lewknor) Machell was buried.
posted May 03, 2018 by [Living Schmeeckle]