James Cummings served in the 2nd Regiment of Lincoln Militia, Canada in the War of 1812
Service started:
Unit(s):
Service ended:

James managed his father's business as a general merchant from 1807 to 1811 when he went into business for himself.[5] He was elected town clerk for the township of Willoughby and remained in that office until 1823. [6] James, like all able men then, served in the militia. When the United States declared war on Britain in the person of its' North American colonies, he was prepared to be called upon. He was appointed to act in the Commissariat Department at Fort George, Upper Canada, but was soon was appointed Deputy Quarter Master General of Militia with the rank of Captain. He saw lots of action as well. At Beaver Dams,[7] Col. Chapin gave James his sword. He was in the battles of Frenchman's Creek, Chippawa, Lundy's Lane, Fort Schlosser and Black Rock.[8] [9] [10] [11] [12]

After the war, in spite of the loss of all his built property, James started over. He rebuilt and gained property, by 1838: a 200 acre grant due a son of a Loyalist and 800 acres for services during the war of 1812. In 1846 after lengthy correspondence with Prime Minister John A. MacDonald, he was licensed to occupy Navy Island; and in 1851 he obtained the North parts of lots no. 7, 8 and 9 in 8th and lot 8 in 9th Concession of Cartwright, Upper Canada, eventually almost all under water. [13]

In 1842, the census shows his family occupied 706 acres, 256 of which were "improved." The lands produced (estimated in Winchester Bushels) 500 wheat, 200 barley and 300 potatoes. Livestock was 30 neat cattle, 6 horses, 60 sheep and 10 hogs. He produced 120 lb. of wool and had 2 thrashing mills. The average price of wheat there was 5/ and the cost of labour was 3/9. By 1851, James was enumerated as a miller. [14] He owned a grist mill that was built of wood and had three run of stones. Propelled by steam, it could produce thirty horse power and make 100 barrels of flour per day.

James was a Justice of the Peace between 1811 and 1861. [15] He served Willoughby township as Town Clerk between 1812 and 1823. He was elected member of the Legislative Assembly of Canada West for the South Riding of Lincoln in October 1844 and remained there until 1848.[16] His involvement with the building of the Niagara Suspension Bridge may be as an MLA. Chippawa was incorporated as a village in 1850, and James served as Reeve until 1861. 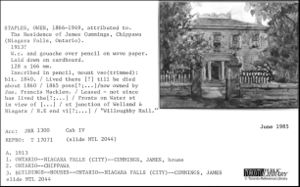 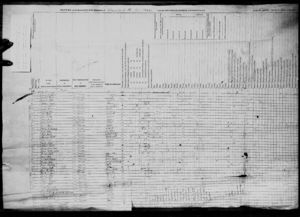 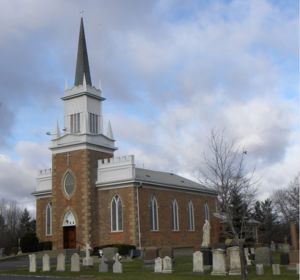 part of the Cummings family marker 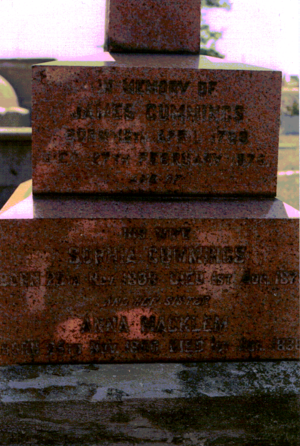 Gives marriage date as the 3rd. to Miss Macklem