"John's will was made May 8, 1722, and proved July 16 following. He bought Jan. I, 1693-4, of Grace Andrews, his grandmother, widow of Robert, for ?60, 80 acres swamp and meadows, south side of Ipswich River 'second division,' bounded by Porter, Ipswich river, William Town and William Perkins. His father in 1718, deeded his homestead to him. He was then dwelling on the tract first mentioned. In his will, after giving to Susanna her thirds of lands on the south side of the river, he divided the farm his father gave him between his sons, Joseph and John, partly in Topsfield and partly in Ipswich, north side of the river; to his son, David, who was executor, all his lands on the south side of the river and the east side of Nichols' brook, and a small piece of meadow on the west side of that brook; to his youngest sons, Stebbings and Samuel, 'all the rest of my lands and meadows on the west side of said brook to the river.' He made specific gifts to his daughters also."[4] 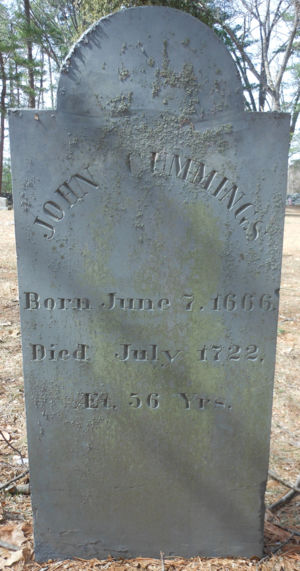