He married 5 Aug 1613 in Hardington, England to Nasareth Margaret Pitcher. [4] Children- all born in Hingham, England [4]

On 26 Apr 1638 Matthew and family left Gravesend, Kentshire, England. The arrived 10 Aug 1638 in Hingham, Massachusetts Bay. Matthew was about 50 years old when he and his wife, their five children, and his wife's sister, who was the widow of Francis Riecroft and who died a few weeks after their arrival, embarked in the ship Diligent of Ipswich, England, John Martin, Master, which sailed from Gravesend, 26 April 1638, with 133 passengers including their rector, Robert Peck. "The immediate occasion of their departure seems to have been trouble in ecclesiastical matters. Their rector, doubtless with the sympathy and aid of most of those constituting the emigrating party, had pulled down the rails of chancel and altar, and leveled the latter a foot below the church, as it remains to this day." [4]

He became a deacon in Rev Hobart's church and had many descendants. It is now pretty well established fact that, with the exception of a few families who have come to this country in the past century, all the persons bearing the surname of Cushing in the United States and Canada are his direct lineal descendants. [4]

He resided on Main Street, Hingham below "Pear Tree Hill."[6]

His will, which was a verbal one, was written after his decease by his children, who, under date of 15 Nov 1660, pray that Daniel Cushing, Esq. their oldest brother, may be appointed administrator of their father's estate. (Will in appendix). [4]

The early Cushing ancestry has been traced from the Viking, Hrolf Nefja Jarl, mentioned in the Scandinavian Sagas relating to the latter half of the eighth century, through his descendants in later centuries in Normandy and in England to a Galfridua, Gerard or Geoffrey Cusyn who was born in Norfolk County, England, in the latter part of the thirteenth century. He possessed estates in Hardingham, Norfolk County, for which in 1327 he was assessed to the King's subsidies. Galfridua's descendants remained in Norfolk County until our immigrant ancestor, Matthew Cushing, moved to America in 1638. The spelling of the name developed from Cusyn, Cosyn, Cussheyn, Cushyn to the current spelling of Cushing. 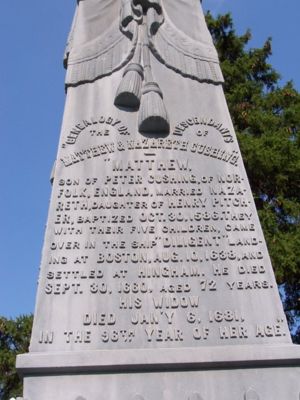