George Custer is Notable.
George Armstrong Custer was a United States Army officer and cavalry commander in the American Civil War and the American Indian Wars.

ask our community of genealogists a question.
Sponsored Search by Ancestry.com
DNA Connections
It may be possible to confirm family relationships with George by comparing test results with other carriers of his ancestors' Y-chromosome or mitochondrial DNA. Y-chromosome DNA test-takers in his direct paternal line on WikiTree: It is likely that these autosomal DNA test-takers will share some percentage of DNA with George: 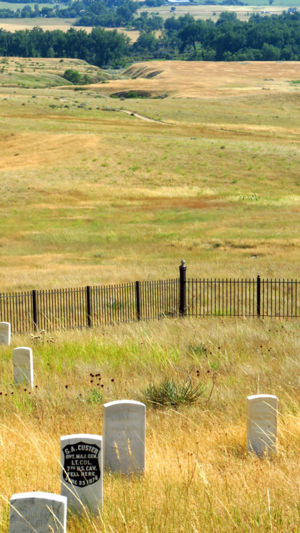 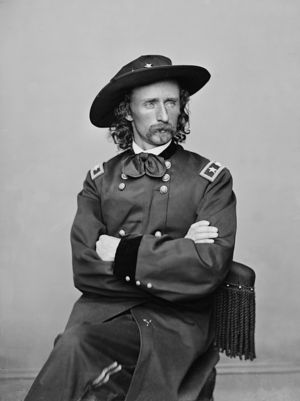 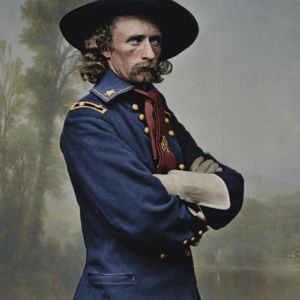 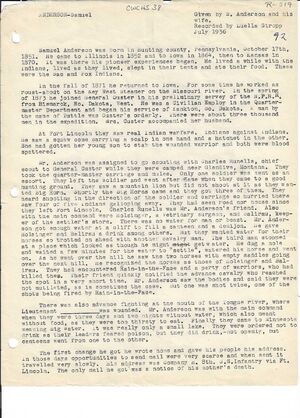 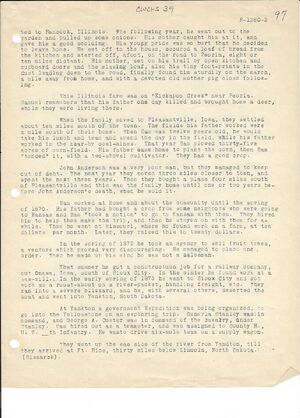 Leave a message for others who see this profile.
There are no comments yet.
Login to post a comment.
Patricia (Long) Kent
Custer-1232 and Custer-109 appear to represent the same person because: Same name, birth date and Bio
posted May 29, 2021 by Patricia (Long) Kent

Battle of the Little Bighorn

Arapahoe warrior Water Man [Arapaho-2], first hand account. "When I reached the top of the hill I saw Custer. He was dressed in buckskin, coat and pants, and was on his hands and knees. He had been shot through the side and there was blood coming from his mouth."

"Then, I was the first one to dig out the fact that there were five Arapahoes in that fight. I dug that out one night sitting in a powwow with a bunch of Arapaho Indians down along the Little Wind River. They started telling me that Old Water Man was in that fight. I sort of scoffed at it because every Indian and his brother was in that fight. Practically all of them killed Custer. When they described Custer and described the fight, you could tell they didn’t know what they were talking about. So I was a little bit dubious about it, but they said Water Man and Left Hand, who were still alive, were both in that fight. So I took a stick of sagebrush and cleared a space on the ground and I drew the Bighorn River and the Little Horn and I started asking questions of Water Man. Where was the village? Where did Custer come from? And so on and so on … and by God he knew. So I arranged then to get him in to get his story rather than having to tell it myself. I arranged to have him come into the town of Riverton, Wyoming, and one night I got a hold of Left Hand. I didn’t get them together, you see. I brought Water Man in one night and Left Hand another night, and in order that no one would have to take my word for it, I got an interpreter and court stenographer and I did one of these question/answer things that we’re doing here and I got a transcript of this whole blasted thing. So I got it from Water Man one night and Left Hand the next night. And I could tell they knew what they were talking about."

"Ha! Too busy trying to make their damn rifles work."

What do you mean?

"Toward the end of the Civil War we had gotten a new rifle, the first of the repeating rifles for the Army. It was called the Spencer and it had a tubular magazine that you pushed into the butt. It fired seven shots and that was the first repeating rifle or carbine. The Cavalry was armed with it first. The Indians used to say about it: “That gun, you load it on Saturday, it shoots all week.” You see, it held seven shots. It was used very successfully by Custer’s division. They were armed with it at Appomattox, for instance, so that the fire power for that one outfit was as much as Lee had in his whole army. But after the war, when somebody wanted to adopt that carbine for the Cavalry, these old fuddy-duddies in Washington, the old-timers in the War Department, said: No, no, these fellows don’t know how to handle arms well enough and they’d shoot away too much ammunition. So they went back to the old trap-door Springfield rifle and carbine. It was single shot. You had to throw open the trap door and it was supposed to eject the shell. Well, the shells that they used in those Civil War guns, both the rifle and the carbine, were copper, and copper is fairly soft. It would expand in the chamber of the gun, and when the shell was ejected the ejector would tear the rim off the cartridge, and the fellows at the Custer fight, as the Indians told me, had their knives out trying to pry these shells out of their guns."

So that they could reload?

"Right. Old Left Hand told me that he came up the hill and this soldier was wounded and he handed him his gun, wanted to surrender to him. They didn’t understand. You don’t surrender to an Indian. And Left Hand said he took the gun, but he couldn’t use it because the shell jammed in the chamber."

Russell Slayden
In a cemetery in Waverly Tennesse, a Gravestone with the name Sarah Custer 1843-1925 was discovered. The thought is that she is one of George Custer's half-siblings. Is there a way to get the names of Gen. Custer's half-siblings?
posted Jul 25, 2020 by Russell Slayden
Anonymous Martindale
There is an excellent biography written more about George Armstrong Custer, the man and less about his death at Little Bighorn. It is written by T.J. Stiles and is called "Custer's Trials: A Life on the Frontier of a New America". Stiles won the Pulitzer Prize for writing this book and by many is said to be the truest account of Custer's actual life. George Armstrong Custer was a paradox. He accomplished so much in such a short amount of time, yet his destiny was to self destruct. The book is an excellent read if you want to know more of who he was during his life, and why he was that way.
posted Mar 01, 2020 by Anonymous Martindale

Ralph Rogers
Custer had two younger brothers, Thomas Custer and Boston Custer, who both died with him at the Little Bighorn. His other full siblings were the family's youngest child, Margaret Custer, and the weak and unhealthy Nevin Custer. Custer also had several older half-siblings.