[send private message]
Profile last modified 24 Nov 2019 | Created 30 May 2014
This page has been accessed 4,928 times.
This profile includes a list of sources but they remain unclear because it has insufficient footnoted references. Please help to improve this profile by introducing more precise citations.

Nicknamed "The Maid of Orléans", Joan of Arc (Jeanne d'Arc) is considered a heroine of France and a Roman Catholic saint.

Born about 1412 in Domrémy, a isolated village in Eastern France, Joan was the daughter of Jacques d'Arc and Isabelle Romée. Jacques and Romée owned about 50 acres of land there. Jacques, to supplement his farming, also held a position as a village official, where he collected taxes and led the village watch. During Joan's childhood there were several raids on the village and on one occasion it was even burned.

Joan's trial and execution was managed by Richard de Beauchamp, Earl of Warwick.[3]

During the trial, she testified that her first vision occurred at age twelve (c. 1424). While she was in her father's garden, she saw visions of figures she identified as Saint Michael, Saint Catherine and Saint Margaret. They told her to support the uncrowned Charles VII, drive the English out of France and bring the Dauphin to Reims for his coronation. Joan went on to say that as they left she cried due to their beauty.

At age 16, Joan asked a relative to take her to the nearby town of Vaucouleurs, where she petitioned the garrison commander Robert de Baudricourt, to visit the French royal court. At first, he sent her away with a sarcastic reply. She returned the following January, gained support of two of Baudricourt's soldiers and managed a second meeting where she made a remarkable prediction about a military reversal that would happen.

Baudricourt granted her an escort and Joan made the journey through hostile territory dressed as a male. She then met with Charles VII who was impressed with her. Joan asked to travel with the army and wear protective armor, a request which was granted.

Historian Stephen W. Richey wrote: "After years of one humiliating defeat after another, both the military and civil leadership of France were demoralized and discredited. When the Dauphin Charles granted Joan’s urgent request to be equipped for war and placed at the head of his army, his decision must have been based in large part on the knowledge that every orthodox, every rational option had been tried and had failed. Only a regime in the final straits of desperation would pay any heed to an illiterate farm girl who claimed that the voice of God was instructing her to take charge of her country’s army and lead it to victory."

Charles VII sent Joan to the siege of Orléans as part of a relief mission. When the siege was lifted after nine days, Joan gained prominence, and several additional quick victories led to the Charles' coronation.

Joan of Arc was captured 23 May 1430 and handed over to the English. She was put on trial for several charges, including heresy. On 30 May 1431, Joan was found guilty, convicted and sentenced to death. She was burned at the stake when she was about 19 years old.

Twenty-five tears after her death, Pope Callixtus III reviewed the trial, proclaimed her innocence and declared her a martyr. On 16 May 1920 Joan of Arc was canonized by Pope Benedict XV. 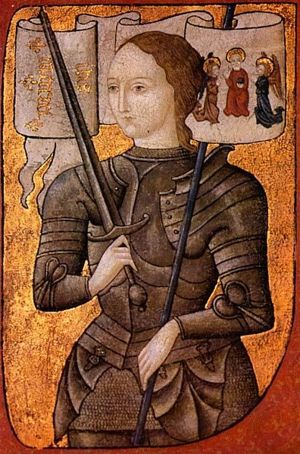 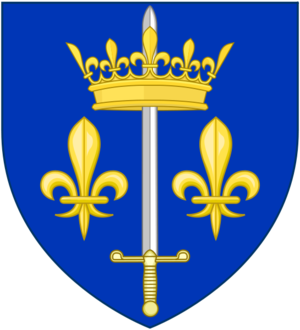 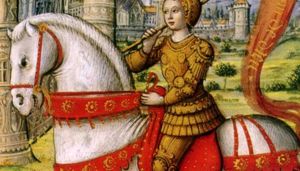 Lisa (Kelsey) Murphy
Her being canonised was at Notre Dame Cathedral. There is a page for the cathedral. Could

please be added to link them?

posted Apr 18, 2019 by Lisa (Kelsey) Murphy
Joseph Lastowski
why aren't her parents listed? It appears we know who they were.