Born in Weiler in Durlach (now Karlsruhe), Baden, Germany, Johann Friedrich Dague (Deg, Deeg) was the son of Andreas Deeg and Anna Maria Kudin. Weiler was in the Rhine River Valley near the French border. Friedrich came to America with his family in 1740, according to Filby's "Passenger and Immigration Lists*." He and his brother Andreas must have returned to Germany, then came back to America in 1753 on the ship "Eastern Branch."

He attended Trinity Lutheran Church while living in Lancaster, PA. After moving to Frederick County, MD, he and his family then moved further on to Washington County, PA. Friedrich purchased several tracts, including "Keyhole," "Tage's Grove," "High Germany," and "Brown (or Bushy) Flat."

ask our community of genealogists a question.
Sponsored Search by Ancestry.com
DNA Connections
It may be possible to confirm family relationships with Frederick by comparing test results with other carriers of his Y-chromosome or his mother's mitochondrial DNA. However, there are no known yDNA or mtDNA test-takers in his direct paternal or maternal line. It is likely that these autosomal DNA test-takers will share some percentage (beta) of DNA with Frederick: 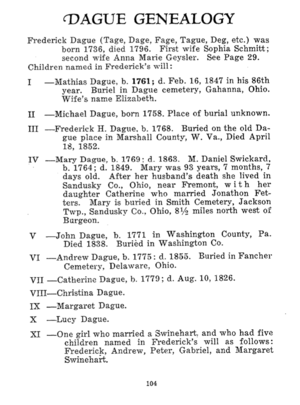 Teresa Downey
Dague-171 and Dague-47 appear to represent the same person because: Exact same spouse on both profiles
posted Jun 07, 2020 by Teresa Downey

Sherry Wells
Dage-25 and Dage-23 appear to represent the same person because: Dage-25 isn't attached to anyone. Could these be duplicates?
posted on Dage-23 (merged) Oct 09, 2016 by Sherry Wells