Daniel Daly was awarded the Medal of Honor.

This profile won Profile of the Week the First Week of December 2013.

Sgt Major Daniel Daly was Wounded in Action during World War I.

Daniel Joseph Daly is traditionally known to be born November 11 1873 in Glen Cove New York, but actually he was 3 years older.[1] The 1880 United States Census records him living in Oyster Bay, Queens, New York with his father John 45 and brother David 12.[2] In the 1892 New York, State Census Daniel is living with his mother Ellen 46, sisters Julia 18, Mary 8, and brother David 24 who is in the US Navy, in Queens, Long Island.[3] On both these Censuses Daniel is listed as being born 1870/1, and in 1893 his sister Julia is registered as dying on 29 September 1893 with the parents of John and Ellen Daly with the birthplace of Glen Cove.[4]
At the age of 12 Daniel was working selling newspapers on street corners and became a semipro boxer in sports clubs, often using his skills to get the bestselling spots. On January 10, 1899 he enlisted in the U.S. Marine Corps. He was 25+ years old when he signed up. He joined for one purpose: to get in the Spanish/American War, but this conflict ended on April 11, 1899 before he finished boot camp training and he was transferred aboard ship and sent to the Asiatic Fleet.[5]
In 1900 Daniel was a Marine Private during the Boxer Rebellion in China. China, at this time had been divided by six great powers — Russia, Germany, Britain, France, Italy and Japan. The United States was not involved in the exploitation of China, but had missionaries and a small legation in Peking. A secret society of Chinese dissidents became active in 1899 to rid China of foreigners and Christian missionaries and their converts. The Imperial Army of China lacked the unity and military might to repel the unwanted occupiers, so the “I Ho Chuan” who's symbol was a fist (Fists of Righteous Harmony) were encouraged by the Empress Dowager Cixi to drive the foreigners into the sea. The Westerners called these fighters “Boxers,” a nickname derived from the "I Ho Chuan" practicing gymnastics and calisthenics. In May 1900 the Foreign Compound was under siege by the Boxers and on 14 August 1900, Daniel Joseph Daly performed the action which earned him his first Medal of Honor. The action consisted of Daniel volunteering to creep out in front of a position that needed to be reinforced to hold back the Chinese while repairs were made on the fortress. During the night Daniel defended his position as small batches of Chinese attacked with rifles, spears and arrows. Using his bolt action M1895 Lee rifle and bayonet, his ferocity in battle caused the enemy to cry out "Quon-fay" several times during the night, which translated means "very bad devil". Daniel killed over 200 Chinese by accounts.[6]
The Citation Reads[7]
The President of the United States of America, in the name of Congress, takes pleasure in presenting the Medal of Honor (First Award) to Private Daniel Joseph Daly (MCSN: 73086), United States Marine Corps, for extraordinary heroism while serving with the Captain Newt Hall's Marine Detachment, 1st Regiment (Marines), in action in the presence of the enemy during the battle of Peking, China, 14 August 1900, Daly distinguished himself by meritorious conduct.
General Orders: War Department, General Orders No. 55 (July 19, 1901)
Action Date: 14-Aug-00
Service: Marine Corps
Rank: Private
Battalion: Captain Newt Hall's Marine Detachment
Regiment: 1st Regiment (Marines)
Following the Boxer Rebellion now with the Rank of Gunnery Sergeant Daniel took part in some of the Banana Wars one which he distinguished himself once again in a one man attack on snipers which allowed his men to advance into the town of Vera Cruz against the Mexicans. In October 1915 he was to be awarded his second Medal of Honor:
In July 1915 President Wilson invoked the Monroe Doctrine in order to protect American lives in Haiti and to restore order to the republic. As a result of the enforcement of the Doctrine, United States bluejackets and Marines were to secure the country. 330 Marines were sent on July 28, 1915, one was Gunnery Sergeant Daniel Joseph Daly. Port-au-Prince was restored to order but the mountains were ruled by Cacos Rebels.

While on patrol on the evening on October 24 1915 in a Company of Marines whilst crossing a river in a ravine they were attacked on 3 sides by approximately 400 concealed Cacos Rebels which killed the horse carrying the heavy machine gun, the Marines moved forward to cover and Daniel volunteered to recover the machine gun which was strapped to the horse dead in the river. By accounts Daniel killed up to 7 Cacos Rebels with just a knife and as he was cutting the straps that held the machine gun strapped to the dead horse in the river, bullets were striking the water all around him and he returned to his Company with the machine gun strapped to his own back. At dawn the next day the Marines advanced in 3 directions surprising the Rebels forcing them to scatter. For this action he was awarded his second Medal of Honor
The Citation Reads[8]
The President of the United States of America, in the name of Congress, takes pleasure in presenting the Medal of Honor (Second Award) to Gunnery Sergeant Daniel Joseph Daly (MCSN: 73086), United States Marine Corps, for extraordinary heroism in action while serving with the 15th Company of Marines (Mounted), 2d Marine Regiment, on 22 October 1915. Gunnery Sergeant Daly was one of the company to leave Fort Liberte, Haiti, for a six-day reconnaissance. After dark on the evening of 24 October, while crossing the river in a deep ravine, the detachment was suddenly fired upon from three sides by about 400 Cacos concealed in bushes about 100 yards from the fort. The Marine detachment fought its way forward to a good position, which it maintained during the night, although subjected to a continuous fire from the Cacos. At daybreak the Marines, in three squads, advanced in three different directions, surprising and scattering the Cacos in all directions. Gunnery Sergeant Daly fought with exceptional gallantry against heavy odds throughout this action.
Action Date: 24-Oct-15
Service: Marine Corps
Rank: Gunnery Sergeant
Company: 15th Company (Mounted)
Regiment: 2d Marines
During World War I and now a First Sergeant, he served from 4 November 1917 to 21 April 1919 with 73rd Machine Gun Company, 6th Regiment Marines, 2nd Division, A.E.F, he was in combat in the Toulon Sector from 15 March-13 May 1918, the Aisne Operations from 31 May – 9 July 1918 and it was during the later action at Belleau Wood his famous battle cry became known "Come on you sons o' bitches, do you want to live forever" (he denied he ever said it, an NCO of the US Marines does not use bad language).
For actions on the 5 to 10 June 1918 which in the citations state:

Daniel was also in the actions at St. Mihiel and Blanc Mont, he was wounded 21 June 1918 and twice wounded 8 October 1918
Sergeant Major Daniel Joseph Daly was at his own request placed on the Retainer List of the Fleet Marine Corps Reserve and worked as a Security Guard for a Wall Street Bank, New York City and officially retired from the US Marines on 6 February 1929.

Sergeant Major Daniel Daly was buried Glendale Long Island at the insistance of his sister Mary Loeb but was told the burial ground was full. The USMC obtained permission for his burial there. Sergeant Major Daniel Daly was the Registered Owner at Calvary Cemetery, Woodside, Queens County, New York of Plot Section 17, Range 21, Plot H, Grave 7, where 7 of his family are buried:

Thank you to Eric Daly for creating Daly-434 on 28 Nov 13. Click the Changes tab for the details on contributions by Eric and others. 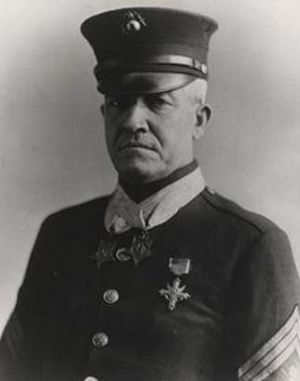 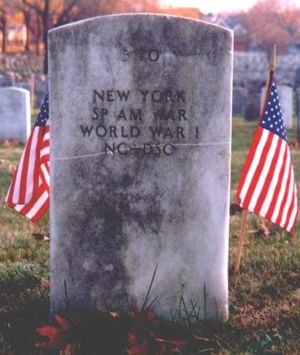 Leave a message for others who see this profile.
There are no comments yet.
Login to post a comment.
Sheila x
Official Military Personnel File for Daniel Daly 434 items https://catalog.archives.gov/id/57283359
posted Mar 27, 2019 by Sheila x

Paula J
Of the 3,460 Medals of Honor awarded since the inception of the award, only 19 individual servicemen have received TWO awards of the Medal. Home of Heroes
posted Dec 31, 2016 by Paula J

I am so happy to see this amazing profile featured again! It is one of my favorites!

Nae (Lockhart) X
Congratulations! I am glad you and Daniel have won and that you received the recognition for the great job that you are doing with these profiles. Truly and artist!  :)
posted Dec 06, 2013 by Nae (Lockhart) X