Martha had three brothers and five sisters. She was the eldest daughter of John Dandridge and Frances Jones.

She is named for her cousin Martha Dandridge (born 1721).

Martha had no formal education to speak of, but she was trained in the home in sewing, music and how to run a household. It is believed that an indentured servant to the Dandridge family, Thomas Leonard, taught her other things such as plantation management, crop sales, animal husbandry, and homeopathic medicine.

In 1750, She married first to Daniel Parke Custis, with whom she had four children. Two (Daniel and Frances) children died when they were three and four years old respectfully. Her husband died in 1757. When Martha became a widower of Daniel Parke Custis, she became one of the wealthiest women in her part of Virginia.

At White House and in Williamsburg, Custis and his wife enjoyed the life of a wealthy and elite Virginia planter family. They had four children, all given the middle name Parke in order to preserve their eligibility to inherit as descendants of his great-grandfather, Daniel Parke, a member of the Council who had died in 1679. Custis's first son and first daughter died early in childhood. His younger son, John Parke Custis, lived to adulthood and became heir to the Custis wealth and its entangled lawsuits; his second daughter, Martha Parke Custis, died at age seventeen after an epileptic seizure.[3]

When she was 27 years old, Martha Dandridge Custis married Colonel George Washington (1732–1799) on 06 January 1759 at the "White House in New Kent, Virginia,"[4]. Colonel George Washington was the commander of the First Virginia Regiment in the French and Indian War, former member, House of Burgess, Frederick County (1758). He would become the first President of the United States of America.

Although there is no known “pre-nuptial” as modern times would equate it, the great inheritance which would come to Washington as a result of his successful courtship of Martha Custis is widely believed to have been a factor in his interest in marrying her.

They lived at estate "Mount Vernon," initially leased from his half-brother Lawrence's widow, and inherited upon her 1761 death.

By second marriage: None

Martha did not attend George's first inauguration held in New York; however, she was present at his second held in Philadelphia. She did not particularly care for her role as First Lady, but she was known for holding official receptions every Thursday afternoon at the Executive Mansion.

She was known to financially support and intercede when necessary on the behalf of Revolutionary War veterans who were in need.

Upon Washington's death on 14 December 1799, the slaves owned by the Washingtons were promised their freedom upon Martha Washington's death. Making clear the tremendous personal sacrifice that the federal government asked of her in requesting that she permit the remains of the first president to be eventually interred at the U.S. Capitol Building, she wrote to President John Adams that she would acquiesce with her sense of public duty.

Excerpt from an obituary published in the Virginia Gazette on 29 May, 1802:

As the first First Lady, Martha Washington was forever iconized in all forms of commemoration alongside the image of her husband. For many generations, framed pictures of both George and Martha Washington were hung in American classrooms, Martha Washington’s patience, steadiness, optimism and loyalty held up as ideal virtues. Among the numerous engravings and illustrations made to commemorate the life of George Washington, his wife was also almost always depicted alongside him. She was also the first historical woman figure to be depicted by the federal government on postage stamps and currency.

Thanks to Keith Corbett for starting this profile. Click the Changes tab for the details of contributions by Keith and others.

Sponsored Search by Ancestry.com
DNA
No known carriers of Martha's DNA have taken a DNA test. 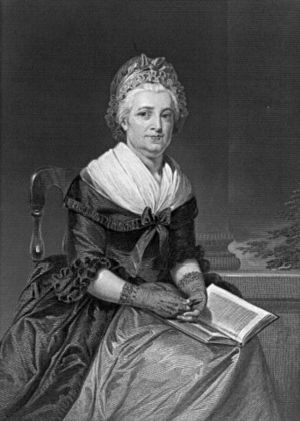 Martha Washington as a Young Woman 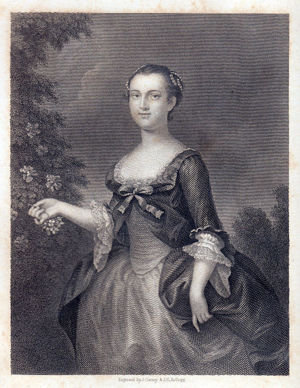 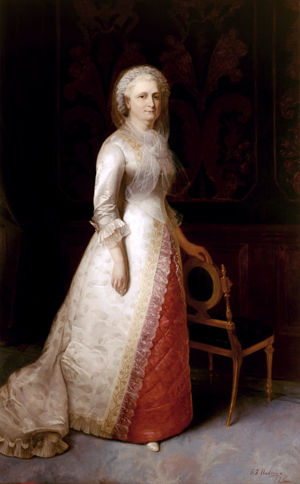 Martha Washington 1 and one half Cents US Postage 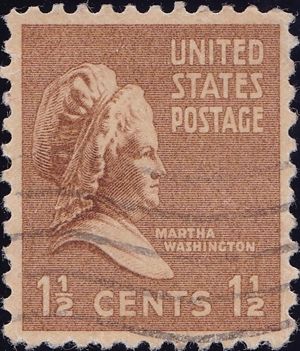 Leave a message for others who see this profile.
There are no comments yet.
Login to post a comment.
Anna (Conway) Strutt
A source for Martha (Dandridge) Custis Washington: <ref>"Genealogical chart showing the descent from several lines ... of the Virginia families of Alexander, Anderson, Aylett, Bruce, Dandridge, Fontaine, Henry, Junkin, Moore, Poindexter, Spottswood, West, etc

These two profiles appear to be duplicates. Places of death and birth are the same - date of birth is slightly different. Spouse is the same although Washington-1401 is missing a spouse.

Michael Stills
Have you read this about Martha Washington?