Clarence Darrow, born April 18, 1857, was a powerful American lawyer and leader of the American Civil Liberties Union. He is best remembered as representing "teen thrill killers" Richard Loeb and Nathan Leopold, Jr. for their roles in the murder of 14-year-old Bobby Franks and also for defending John T. Scopes in the Scopes Trial.

The son of Amirus Darrow and Emily (Eddy) Darrow, Clarence Darrow was born into a deep-rooted New England family. After an education at Allegheny College and the University of Michigan Law School, Darrow became a member of the Ohio bar in 1878. For the next nine years he was a typical small-town lawyer until moving to Chicago in search of more interesting work.

In 1890 he became General Attorney to the Chicago and North Western Railway. However, during the Pullman Strike Darrow felt sympathy for the trade unions and offered his services to its leaders. He defended Eugene Debs, president of the American Railway Union, when he was arrested for contempt of court arising from the strike. Although Debs and his fellow trade unionists were convicted, Darrow had established himself as America's leading labor lawyer. Over the next few years Darrow defended several trade union leaders arrested during industrial disputes. Darrow also became involved in the campaign against child labor and capital punishment.

During 1906 and 1907, Darrow successfully defended William D. Haywood, leader of the Industrial Workers of the World (IWW), when he was charged with murdering Frank R. Steunenberg, the former governor of Idaho. He also defended the labor leaders charged with dynamiting the Los Angeles Times building.

In 1924, Darrow took on the Leopold and Loeb case - representing the teenage sons of wealthy Chicago families who had been charged with kidnapping and murdering young Bobby Franks. The case was dubbed by the media as the "crime of the century."

In the Scopes Trial of 1925, Darrow, an agnostic, was pitted against political orator William Jennings Bryan, who held a fundamentalist interpretation of the Bible. Bryan, a former Secretary of State under Woodrow Wilson, was a Democratic party leader and longtime presidential hopeful who had volunteered to help prosecute Scopes. Bryan took the witness stand in defense of the Bible's creation story and was subjected to Darrow's mocking examination of the book of Genesis. The trial's fame rests on the shouting matches between Darrow and Bryan over science and religion.

Darrow died on March 13, 1938. The Clarence Darrow Octagon House, his childhood home, still stands as a memorial to him in Kinsman, Ohio.

Attorney and Social Activist. Clarence Darrow was the son of former Unitarian minister Amirus Darrow, a freethinking iconoclast who sheltered escaping slaves in the Darrows' Kinsman, Ohio home. Attracted to debate by his father's continual need to defend his political and religious positions, Darrow trained for one year as an undergraduate at Allegheny College and for another year at the University of Michigan Law School before passing the Ohio bar in 1878 and beginning his practice in Youngstown. Darrow moved to Chicago in 1887 to become a corporate attorney for Chicago and Northwestern Railway, but left that position in 1894 to defend his employer's opponent Eugene V. Debs, the leader of the American Railway Union inthe Pullman Strike of 1894. From that point on, Darrow would become known as a premier defense attorney who specialized in representing those from the American underclass. Among his better known cases were his successful defense of International Workers of the World leader Bill Haywood in that radical labor leader's trial for the 1905 assassination of Idaho governor Frank Steunenberg, his 1911 successful plea bargain on behalf of the MacNamara brothers after the militant trade unionists had bombed the "Los Angeles Times" offices, and his 1925 work on behalf of Ossian and Henry Sweet (along with nine other African-American defendants) in a series of trials that ended up with all eleven accused being cleared - a historic precedent in trials involving black people charged with crimes against whites. Darrow's two best known cases were the Leopold and Loeb murder case in 1924 and the Scopes"Monkey Trial" in 1925. In the Leopold and Loeb case, the accused teenagers, both University of Chicago students with IQs in the high genius range, had murdered 14-year-old Bobby Franks as an experiment in Nietzschean ethics. Faced with a mountain of physical evidence adversary unsympathetic defendants, Darrow opted to advise his clients to plead guilty, then delivered an amazing 12-hour closing argument that invoked the forces of modern ideas on the crime and a Freudian understanding of the defendants' motivations; Nathan Leopold and Richard Loeb were both spared the death penalty. In the Scopes trial, Darrow defended John T. Scopes, a Tennessee football coach accused of violating that state's Butler act by teaching evolution while filling in for an absent Biology teacher. Though Scopes was found guilty, Darrow made his case for scientific free thought by calling the prosecuting attorney, statesman and religious activist William Jennings Bryan, as a witness on the inerrancy of the Bible and, in the opinion of most observers, proving Bryan's position specious; Scopes guilty verdict was later overturned on a technicality. Darrow largely retired after the Scopes trial, though he did accept a large fee (after taking large stock losses in the Great Depression) to defend the wealthy Thalia Massey in a racially charged 1934 manslaughter trial in the then-territory of Hawaii. Following his death, Darrow was portrayed by Spencer Tracy in the 1960 film "Inherit the Wind" (based on the Scopes trial) and by Henry Fonda in a 1974one-man show recapping the great advocate's life. (bio by:Stuthe history guy)

ask our community of genealogists a question.
Sponsored Search by Ancestry.com
DNA
No known carriers of Clarence's DNA have taken a DNA test. 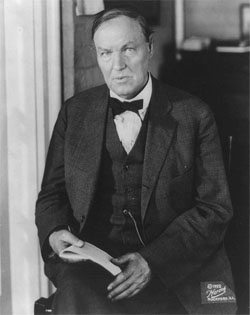 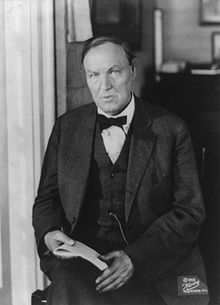 Richard (Jordan) J
For your consideration: