Charles Robert Darwin was an English naturalist and geologist, best known for his contributions to evolutionary theory.

Charles Robert Darwin was an English naturalist, geologist and botanist. His best-known book, entitled On the Origin of Species, was written in 1859, and explored the theory that all species of life had descended from a common ancestor.

Charles Darwin was born in Shrewsbury, Shropshire, on 12 February 1809, and baptised at St Chad's in Shrewsbury on 15 November of that year.[1] He was the son of Dr Robert Darwin, and his wife Susannah, (the daughter of Josiah Wedgwood, pottery manufacturer). He came from a family of inquiring minds. His grandfather, physician and natural philosopher, Erasmus Darwin, had written 'Would it be too bold to imagine, that in the great length of time, since the earth began to exist … that all warm-blooded animals have arisen from one living filament, which the great first cause endued with animality'[2] but he had died in 1802.

Charles's mother died 1817, and his father Robert grieved alone, keeping his feelings to himself. He threw himself into his work, often staying away overnight to care for his patients with the older girls providing much of the care for Charles and his younger sister Catherine, including their early education. Charles's brother Erasmus was a boarder at Shrewsbury School and at the age of ten Charles joined him. Charles and Erasmus became closer in his teens and the brothers travelled together to view natural and man-made wonders, and to visit friends and relatives, sometimes with his Wedgwood cousins and sisters Caroline and Catherine.[3]

At the age of sixteen, Charles was accompanying his father on his rounds and seeing some patients of his own. This suggested to his father that a medical career was a good choice for Charles and he was sent to the University of Edinburgh where his brother was studying. However this did not prove to be the career path that Charles desired and whilst he enjoyed chemistry lectures the rest of his studies were of no interest. He spent his time on self-education in natural history and became a member of the Plinian Society, a student body interested in natural science.[3]

After admitting to his father that he did not want to be a doctor it was decided that he would become a clergyman.[4] Charles entered Christ's College Cambridge in January 1828[5] to study for the requisite degree for this career path. Charles wrote 'the three years which I spent at Cambridge my time was wasted, as far as the academical studies were concerned, as completely as at Edinburgh and at school.'[4] Although he neglected his formal studies Charles wrote that 'the whole three years which I spent at Cambridge were the most joyful in my happy life ; for I was then in excellent health, and almost always in high spirits.'[4] Charles was plagued with health problems throughout his life thus three years of excellent health would have been a significant memory.

His time at Cambridge was also to be a turning point in his life. Charles continued to expand his knowledge of natural history through his own observations and collections, and through his growing friendship with leading academics of the time including William Whewell, Leonard Jenyns and most importantly of all, John Stevens Henslow who was Charles's mentor, teacher and friend. Henslow had recommended Charles to Captain Robert FitzRoy who was looking for a self-funded naturalist to accompany him on a survey expedition expected to last two years.

Charles was accepted on board HMS Beagle, not as the naturalist for the journey of discovery (this position was held by Robert McCormick who was appointed as the ship's surgeon and naturalist), but as a 'supernumerary', to provide assistance to Captain FitzRoy and also as a 'finished naturalist' to help in the identification and classification of specimens.[6] McCormack initially worked with Charles on collecting specimens but was increasingly overlooked for onshore expeditions and eventually invalided home in 1832 leaving Darwin as the sole naturalist on board.[7]

The ship set sail at the end of December 1831, and Darwin spent nearly 5 years on the journey, collecting exhibits and compiling a diary of the voyage.[8]

Charles was a prolific writer of books, manuscripts and letters. Prior to the release of his most famous work, On the Origin of Species in 1859, he had already published numerous books both in his own right and as a contributor. See Darwin Online[9] for an extensive list of his books, pamphlets and manuscripts and the Darwin Correspondence Project[10] which is researching all known letters to and from Charles Darwin.

Charles married his cousin Emma Wedgwood, in Maer, Staffordshire on 29 January 1839,[11] and together they had 10 children. They started their married life living in Gower Street, London, where their first two children William and Ann were born, before relocating a few years later to Down, near Bromley in Kent, although frequent visits were made to Maer, where Emma's parents and grandparents were living.

The 1841 census showed Charles and Emma visiting Emma's family in Maer Hall, with their son William and daughter Anne.[12]

By 1851, the family were settled in their home Down House, near Bromley, Kent. Although Charles appeared to be absent on census night, Emma and their children George, Elizabeth, Francis and Leonard were all at home.[13]

The household at Down house in 1861, comprised Charles, now shown as a Justice Of the Peace, MA and Author Of Scientific Works, his wife Emma and 7 of their children, together with 11 servants.[14]

The family were visiting Charles' older brother Erasmus Darwin when the 1871 census was taken. Erasmus was still unmarried, resided at 6, Queen Anne Street, Marylebone, and was classified as an annuitant and landowner. Charles, now age 62, gave his occupation as shareholder, Sol (solicitor) and J.P., so he was still very much involved with local affairs in Down. Residing with the two brothers were Charles' wife Emma, 4 of their children, and 5 servants.[15]

Back in Down House in 1881, the next census showed Charles and Emma with their son William, (now married to Sarah and with their first son Bernard), and their remaining unmarried children Elizabeth, George and Francis. Charles' occupation simply stated M.A.,L.L.D. (Cambs) F.R.S. J.P.[16]

He was buried at Westminster Abbey on 26 April 1882, the national press reported the event fully, and this extract was from the London Evening Standard:[18]

The entry in the probate calendar for Charles reads:[19]

Charles and Emma had 10 children:

Charles Darwin suffered from illness throughout his adult life exhibiting a myriad of symptoms. These symptoms included intestinal problems, muscle weakness, trembling, palpitations, anxiety and depression, visual disturbances, breathing problems, eczema, swelling of his face, hands and leg, fatigue and severe seasickness. Numerous causes of his illnesses have been proposed with many having a psychogenic or psychological basis. A study by John Hayman into Charles Darwin's symptoms and similar symptoms of close family members suggest that he could have been suffering from Mitochondrial Encephalopathy, Lactic Acidosis, and Stroke-like episodes (MELAS) syndrome. Mitochondria and mitochondrial disorders are maternally inherited. An examination of Darwin’s family history provides supporting evidence that Charles Darwin had such an inherited mitochondrial disorder.[20]

International Darwin Day is celebrated worldwide on the 12 February, to commemorate the anniversary of his birth.[23] 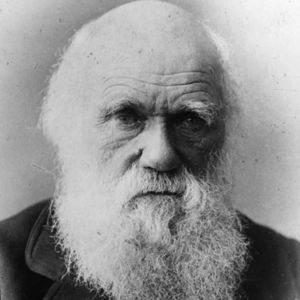 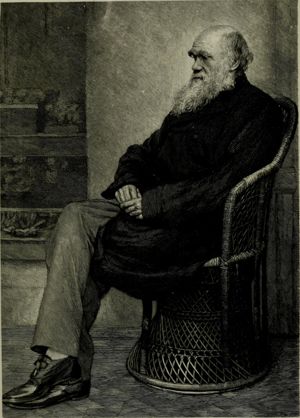 Title page 'The Origin of Species' 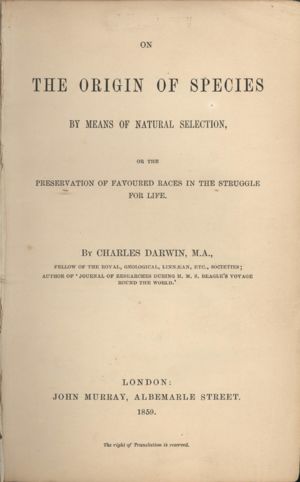 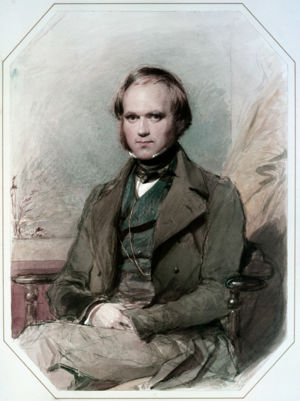 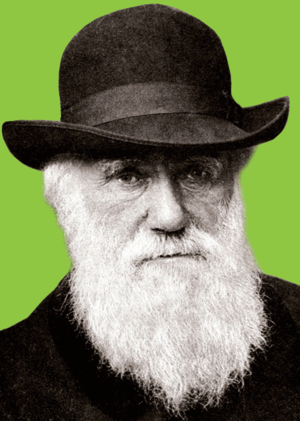 Eowyn (Langholf) Walker
Congrats Bree, this profile is the WikiPick of the Day :)