Narendranath (or Narendra Nath or ‘Naren’) Datta (or Dutt) was born on Monday 12 January, 1863 into one of the most cultured and aristocratic Calcutta families, a Kayastha (Kshatriya = Warrior) family. He clearly had those warrior characteristics from a young age. Narendra’s grandfather, Durgan Charan Dutt, had renounced the world at the age of 25. He only had one son, Vishwanath Datta, Naren’s father, who lived in the ancestral house, 3 Gourmohan Mukherjee Street, in the northern part of Calcutta. His father was a flourishing Lawyer’s assistant, and became a distinguished Lawyer of the Calcutta High Court. He was also generous to a fault, which would later have a great influence on Naren’s life. In addition to generosity, Naren inherited his father's sonorous voice and love of music.

Naren inherited his regal bearing, exceptional memory and his unbounded love for humanity from his mother Bhuvaneshwari Devi and had a passionate adoration for her. However, she wasn’t always able to control the naughty child in him, except by threatening that Shiva[1] would not accept him if he did not behave. He was later to say "In India, the mother is the centre of the family and our highest ideal. To us, she is representative of God, as God Himself is the Mother of the Universe"[2].

Meditation was a favourite game for him and his playmates, when he used to feel inexpressible bliss, before images of Hindu Gods, Vishnu, Rama, Sita, and Mahavir Hanuman[3]. His superb intellectual gifts were developing, as well as his conscientiousness. At the age of 7 he corrected errors made by wandering ascetics and minstrels. Also as a child, he began his interest in science and technology. He could grasp the contents of a paragraph by reading the first and last lines allowing him to digest vast quantities in a matter of hours. In 1871, at the age of 8, Narendranath enrolled at Ishwar Chandra Vidyasagar's Metropolitan Institution, where he went to school until his family moved to Raipur in 1877. It was on that 940km journey westwards from Calcutta to Raipur that he had his first glimpses of nature's beauty, which in later life, as Vivekananda, he described as his happiest moments. In 1879, after his family's return to Calcutta, he was the only student to receive first-division marks in the Presidency College entrance examination. In 1881 he passed the Fine Arts examination, and completed a Bachelor of Arts degree in 1884 at Christian College, Calcutta, where the Principal, William. W. Hastie described him as a genius; by others as ‘so original’ and with ‘an iron will’ (Bankatti, G.S., 1985, p.7).

He had the benefit of an education under British Colonial rule, learning to speak English fluently, but that same rule was to "create widespread poverty and hunger, and the propaganda of their missionaries had created a sense of insecurity among the people about their traditional customs and beliefs"[4].

He first met Ramakrishna Chattopadhyaya-4 when he went to the house of Surendranath Mitra[5], a prominent and prosperous devotee of Ramakrishna, towards the end of 1880, where Naren sang a few songs and was invited to visit him at Dakshineswar (Life of Sri Ramakrishna, 1948, p.331). This he did a little later in 1881, after he had turned down an attempt by his father to marry him off, who died, and subsequently by his mother and grandmother (Bankatti, G.S., 1985, p.8), saying his would be a monastic life, I am sure. Prior to this visit, Hastie discussed Wordsworth’s poem ‘Excursion’ [published 1814] and commented “that he had only known one person who had the vision described by the poet and that was Ramakrishna Paramahansa of Dakshineshwar” (op.cit.,p.9). Steve Taylor (2017, p.57) describes how William Wordsworth-20 was one of those awakened artists who was naturally awake from birth.

He was invited by and went with Surendranath Mitra and a few friends. Ramakrishna described how Naren "seemed unmindful of the external world, part of his mind always concentrated on something within". R. asked N. to sing a few Bengali songs - "the spontaneous outpourings of a devout heart desiring union with the Self" - causing R. to fall into an ecstatic mood. After which, they went into a private area on a verandah where R. addressed N. - "Lord, I know you are that ancient sage, Nara - the Incarnation of Narayana [=Vishnu] - born on earth to remove the misery of mankind" (Life of Sri Ramakrishna, 1948, p.332). Nara had attained perfection and was a past master of meditation. But Naren could not believe what he had heard. Nor following a visit a month later when at Ramakrishna's touch he was fearful that he was losing his individuality. He had a similar experience on a 3rd visit. All these were Ramakrishna's attempts to help Naren realise God, which Naren was resisting.

This was interrupted in 1884 when Naren's father Vishwanath died and the family discovered that through his generosity they were greatly in debt! Being the eldest of 9 children, Naren had to find ways to help the family survive, while still at college. After little success, Ramakrishna, whom he had been seeing increasingly, advised him to go to the temple of Kali and pray to her for guidance. This he did but failed to pray for any kind of worldly necessities. So, Narendra only gradually grew ready to renounce everything for the sake of realising God, and accepted Ramakrishna as his Guru, which should have implied absolute trust and obedience to him. It was only when Narendra fully accepted the Divine Mother - what ever is, is Mother, he came to realise that Ramakrishna was the only person who had truly loved him - "he alone knew how to love another. Worldly people only make a show of love for selfish ends" (op.cit., p.358).

After Ramakrishna made his transition on 16 August 1886 Narendranath and his disciples had to rent a place at Baranagar on the outskirts of Calcutta for their Math (monastery), to carry out their religious pratices. On Christmas eve of the same year Narendranath and 8 disciples took their monastic vows, and he gave himself the name 'Swami Vivekananda'. They lived in poverty for the next 2 years.

From 1888 to mid-1890, Vivekananda and some of the disciples journeyed westwards from Calcutta to acquaint themselves with some of the holy places in the fertile Ganga (Ganges) valley, returning to Barangar from time to time as occasion demanded[6]. Finally, in July 1890, he again left with one of the monks, initially for the Himalayas, and was not to return for 7 years, travelling throughout India, and in 1893 going overseas for 2 years.

In late 1892, while in southern India, he assumed the name Sachidananda. It was there, on a small rocky island at the tip of southern India, known as Cape Comorin during British rule, now Kanyakumari[7], where he was said to have had his life's purpose revealed to him during meditation - "He decided to dedicate his life to revitalizing the country and serving the people of India. His service was not to be restricted to the material plane, [though with a strong emphasis on work,] but would be on a deeper level, on the spiritual plane, which he considered to be the core of India" (ref.4): He could best serve God by serving humankind! The Vivekananda Rock Memorial was erected there in his honour.

However, it was at Maharaja Ajit Singh Bahadur's request that he resumed the use of the name Vivekananda before going overseas in 1893, the trip largely financed by Ajit Singh of Khetri[8], and whom he had spent much time with on 3 visits to Rajasthan.

On 31 May 1893 he departed from Bombay on the S.S.'Peninsular', first to Colombo in Ceylon, where he saw Buddhist temples, then to Malaya, Hong Kong, where he was impressed with Chinese businesses and saw a monastery in China. He then landed at Kobe in Japan, took a land route through Osaka, Kyoto and Tokyo, being much impressed with them, and found that India was regarded as holy land. He sailed on the 'Empress of India' from Yokohama on July 14 and landed at Vancouver, Canada on July 25, then by train to Chicago arriving on July 30, 1893, where he discovered that his goal, the World Parliament of Religions did not open until 11 September 1893. So he went to Boston and gave some lectures at Harvard beginning his introduction and the first teacher of Yoga and the Hindu philosophy to America, and later the UK. His emphasis in the dominantly materialistic Western world countries that he visited was on the rationally based ancient spiritualism of Hindu philosophy, of which they had no understanding.

After his opening speech in Chicago at the Parliament of Religions and other talks that he gave there, American newspapers reported Vivekananda as "the greatest figure in the parliament of religions" and "the most popular and influential man in the parliament" (ref.3). He followed up his success by touring the US, and then the UK, with the added aim of earning enough money to finance his dream of setting up the Ramakrishna Mission at home, and doing his work in his master’s name.

When he returned to India in 1897, he received a triumphant welcome and became famous throughout the country, This helped him to establish the Ramkrishna Mission at Belur Math in Calcutta and begin his work of social reform along with the other disciples of the master. He also attracted a wide circle of followers throughout the country and was able to establish the master’s presence in all corners.

In 1899, he returned to the West for a second time and re-energized the old centers and his followers. But by this time, he had become seriously ill from diabetes which had been troubling him from some time.

In 1901, he returned to his beloved Belur Math, the center of the Ramakrishna Mission. He immersed himself in his work but his illness became more severe and he had to take longer and longer periods of rest.

He made his transition on 4 July 1902, probably of renal complications, at the age of 39 (ref.4). However, according to his disciples, Vivekananda attained mahasamadhi that may have ruptured a blood vessel in his brain, and was a possible cause of death (ref.3). Paramahansa Yogananda Ghosh-44 also made his predicted final exit as a Yogi (mahasamadhi), with the medical diagnosis for his body, after his departure as heart failure.

The work Vivekananda had done created its own momentum, and his message continues to grow and spread. Amongst many new paths he had provided, was "a modern interpretation of selected aspects of Hinduism in line with western esoteric traditions, especially Transcendentalism, New Thought and Theosophy. His reinterpretation was, and is, very successful, creating a new understanding and appreciation of Hinduism within and outside India" (ref.3). The first governor-general of independent India, said Vivekananda was "the maker of modern India"; he greatly influenced India's independence movement and inspired other Indian activists by his writings, as well as intellectual Westerners, such as Aldous Huxley-517, Christopher Bradshaw-Isherwood-1, who became a devout Hindu, and Romain Rolland-100 a French Nobel Laureate .

Is Narendranath your ancestor? Please don't go away!

ask our community of genealogists a question.
Sponsored Search by Ancestry.com
DNA
No known carriers of Narendranath's ancestors' DNA have taken a DNA test.

Images: 3
"If you think yourselves strong, strong you will be" 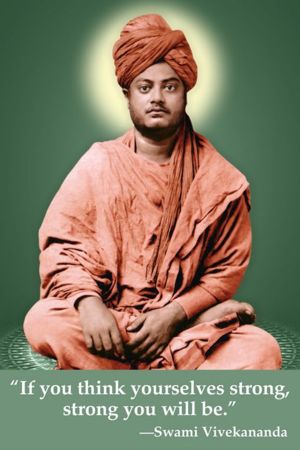 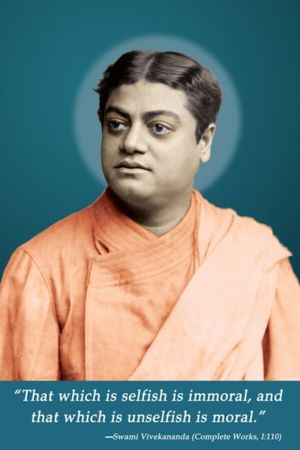 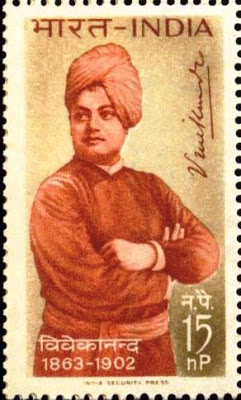