Alexandra David-Néel was a French explorer, author, opera singer, and early French convert to Buddhism. She is believed to be the first woman of European background to visit Lhasa, Tibet.

Biographies of Alexandra David-Néel have often discussed her ancestry, but many of them seem to repeat unproven assertions regarding her background. One such biography described her as having a Huguenot father who was the nephew of Jacques-Louis David, while also stating that her mother's family was one of means and that her ethnic background was Dutch, Norwegian, and Siberian.[1] It is quite possible that these claims were made by David-Néel herself. Regardless of source, they are worth examining more critically.

A review of the documentary evidence paints a portrait that is quite different than what is often proclaimed. First, there is no reason to believe her father, whose family hailed from eastern France, had any close ancestral tie to the famed painter, a native of Paris. Further, while her father may have been a committed Protestant, it isn't clear that his religious beliefs came from ancestral ties. In fact, one of his grandparents was known to have been born in Corsica, a region not known for having a strong Protestant presence.

Claims about her mother's privileged background are also quite confusing. It is known that her birth mother, Alexandrine Borgmans, was born to a single mother in Brussels in 1832. If she had been given up for adoption to a wealthy family, it doesn't seem to have been formalized, for her birth mother was present at her daughter's marriage in Leuven in 1853.

Named Louise Eugénie Alexandrine Marie David at birth, she was born on 24 October 1868 in Saint-Mandé, an inner-ring suburb of Paris. She was the daughter of Louis Pierre David and Alexandrine Borghmans. Her parents are both listed as being without profession at the time of her birth.[2] She had a younger brother, Jules Louis Alexandre Marie, who was born four years later.

She married Philippe François Néel on 4 August 1904 in Tunis.[2]

Is Alexandra your ancestor? Please don't go away!

ask our community of genealogists a question.
Sponsored Search by Ancestry.com
DNA
No known carriers of Alexandra's ancestors' DNA have taken a DNA test. 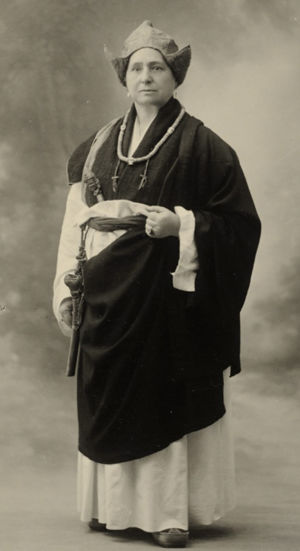 Alexandra is 35 degrees from Laurie Giffin, 47 degrees from Toni Morrison and 29 degrees from Henry VIII of England on our single family tree. Login to find your connection.