The Davidson family of Whenuakura , Patea is a synopsis maybe quite erroneous in part as much is anecdotal . It is believed , Alexander and Jeane Davidson immigrated from Abroath, near Dundee in Scotland in the latter part of the nineteenth century. Alexander probably married Jeane in Scotland prior to emigrating to NZ. Due to time frames open for settlement in South Taranaki Alexander probably did not arrive at Whenuakura before 1873 at the earliest and as one of their children William was enrolled for school there in 1884 Alexander and Jean possibly did not come to NZ before 1879, but this is summising. there were a great many boats plying their trade carrying passengers to NZand Australia those days and any one of them could have been the carrier for the Davidsons of Arbroath. Alexander Davidson died on 5/8/1919 aged 74. Wife Jeane died 21/71920 aged 70. They are both buried in the Patea NZ. cemetery. Jeane is supposed to have had a sister who married a Georgetti who lived in Australia. Alexander anecdotally had two other sisters , Maud and Ellen. Maud married a Lynch, but Ellen remained a spinster who lived at Friockheim House in Abroath. Great grandmother Jean parents both died when she was young and Jean was supposedly reared by people called Gibson.

On settling in New Zealand Alexander and Jeane raised a family comprised of five sons and three daughters. The sons were William Alexander who farmed at Mangaweka; Frederick Charles who farmed at Te Kuiti ; James Gibson who farmed at Pio Pio ; Stan who farmed at Opaku and Edwin Henry who farmed at Whenuakura. Daughter Gertrude Isobel married into the ?Patterson family of Patea , had a daughter Joyce who married George Kettles and had ?2 children, Stephanie and Graeme whom we mixed freely with Bourn cousins when young; Joyce appears to have had a brother Douglas whom played football with father Ralph Bourn Sn for Patea in 1931. Alexander Davidson's daughter, Helen Arbuthnot married into the Snell family .She appears to have died aged 26 on 31/5/1912. She had a son called Wynne who for a number of years was the manager of the blue vein and rennet cheese company at Eltham .When Arbie died early of blood poisoning he was brought up by his aunt, Emily Jane who was the third daughter of Alexander and Jean. Emily Jane ( Auntie Poll) never married, she lived at Whenuakura near her brother Edwin. She died on 13/8/1958 aged 82 putting her birth date in 1876. Edwin my grandfather married twice. The first time to my grandmother, Daisy Valentine, a daughter of Captain Tinney, an early pilot station harbour master of the port of Patea. He also had captained a small trader SS Aorere from port Patea for several years at the turn of the century. Captain Tinney's first name is thought to have been William who died 18.1.1931 aged 74 and his wife Emma who apparently died aged 66 on 20.1.1931 Daisy Valentine my grandmother died quite young, aged 39 on 31.12.1929. Daisy Valentine had at least 2 brothers that served in the first world war - Norman and Percy Henry.

Chloe Davidson had two older brothers. Lynsay the oldest died about 1994, aged ? 84. Her other brother Maxwell Gordon was about a year older than mother Chloe. He died in 1999 aged 87. Lynsay had three offspring ( my cousins) Helen, Ken and William. Helen possibly died in Dec. 1978. Maxwell married Doris ......and had four daughters , cousins Dawn, Maxine, Anne and Jeannie. My mother also had a younger sister, June Lorraine who died accidentally on 24.6.1943 after falling into a boiling mud pool at Rotorua one night while taking a shortcut home thru a reserve. She was a nurse and only 24 years of age. Edwin's second marriage was to Bessie Gibson. ( Probably no relation to the Scottish aforementioned family). They lived just northwest of the Patea Primary School. That union was childless. Bessie died Jan. 1976 aged 83.

Enrolments at Whenuakura school show Edwin enrolling in 1893 and still attending in 1902, William in 1884, Helen in 1891, Gertrude ( Joyce Kettle's mother) in 1887. Others attending later were Lyndsay in 1916, Max in 1918, Chloe ( my mother) in 1919 along with Ian ( Fred Davidson's son ), In 1920 Nancy Davidson attended (Neil Davidson's sister). Presumably Neil was a son of either William, Fred, James or Stan ( most likely Stan). In 1941 Kenneth Davidson son of Lynsay attended, then Dawn in 1944 ( Max 's daughter followed by William ( Lynsays second son) in 1946 and Maxine in 1947 , Anne in 1949 and Jeannie in 1954 ( other daughters of Max) . In 1958 , Adrienne Davidson was enrolled ( daughter to Neil and ? half sister to Michael who was the son of Pat Davidson who was killed during the second world war on 13/4/1942 aged 26. Pat's proper name was George Leslie Davidson . He was also brother to Nancy and Molly Davidson. Besides Pat , a son of James Davidson ( Jack) was also killed in the line of duty. His recent son Michael I think was reared by his uncle Neil . Jannine and Jacquiline Maree Bourn ( Hugh Bourn's daughters ) also attended Whenuakura School in 1969 and 1971 respectively . Of Ralph and Chole Bourns children Hugh and Marlene were in attendance at nearby Opaku School in 1940 and Wallis also there in 1948. Michael Davidson (son of Pat) was also at Opaku in 1945.

It is not known what kinship the Davidson’s of Whenuakura had with reknown civil engineer Duncan Davidson who died at Havelock North in March 1998. Duncan was the last direct descendant of the Davidson chieftains of Tulloch and Guthrie castles in northern Scotand. I suspect the relationship was extremely distant with the clan dispersing geographically throughout Scotland possibly after the battle of Cullondon.

Is Ed your ancestor? Please don't go away!

ask our community of genealogists a question.
Sponsored Search by Ancestry.com
DNA Connections
It may be possible to confirm family relationships with Ed by comparing test results with other carriers of his Y-chromosome or his mother's mitochondrial DNA. However, there are no known yDNA or mtDNA test-takers in his direct paternal or maternal line. It is likely that these autosomal DNA test-takers will share some percentage of DNA with Ed: 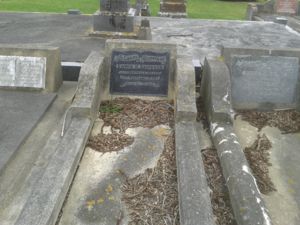